I intended to write this post before the quads arrived, but I’m glad I didn’t because now there is so much more to the story now.  When I went on bed rest I was a bit concerned about how George would handle it (well, handle EVERYTHING from taking care of me to paying bills and doing the laundry).  You see, George is a wonderful husband, but a notoriously awful nurse.  From our days as newlyweds, when I’ve been sick with something like a cold he’s underestimated my level of discomfort.  One time we were both convinced that my stomach flu was anxiety about an upcoming presentation, until he caught it.  Once I was sick with the flu and gave him a list of requests from the grocery store.  My main request was Jello cups.  He returned with an assortment of sick people food, but no Jello cups.  This is because he doesn’t like Jello.  UGH!  That made me really worry about bed rest. Would our house implode?  Would I starve?  Would the dogs run loose?

George proved me totally wrong.  The first week of bed rest was tough on both of us.  I was frustrated with my lack of freedom and ability to do things.  He was frustrated with handling pretty much all of the household upkeep.  As the pregnancy progressed, I became increasingly frustrated with my limitations, but George stepped up to the plate and proved himself to be an excellent caretaker and father.  After working a full day, he would come home to tidy up the house, make sure I ate a decent dinner and had snacks ready for the next day, stayed on top of my fluid intake, and best of all kept me company.  If I didn’t drink enough water, he would remind me that the babies needed it.  When he was home, George spent many an hour next to me in bed allowing me to choose what we watched on TV or what we would talk about.  He knew that it was important that I was well cared for so that the babies would thrive, and they did.

Aside from taking care of a bed ridden me, George diligently transformed a house for two to one that would accommodate six.  That meant carving out lots of storage and organizing everything.  He hung our quad stroller using a bicycle pulley system, created a poop shoot, sacrificed part of his work bench to garage the van, carved out closet space under the stairs, moved an outlet for our new freezer, and helped decorate the nurseries.  He did all of this on his own accord, never complaining or procrastinating.  He did an amazing job of everything he tackled.  As I watched him “nest” and care for me, I knew that George was already an excellent father.

When Father’s Day arrived, many of our friends and family wished George a happy Father’s Day.  He, however, insisted he was not yet a father.  He was wrong.  He was a father the day our quads came to exist and has been preparing long before that time.

As soon as the quads arrived, he began to get his hands dirty so to speak.  Before I could really even get around independently, he was changing dirty diapers.  Honestly, he was changing stinky diapers before I knew we were even allowed to touch them.  When I was nervous about handling fragile Sydney, George held her with gentle hands.  He adores our babies and misses them severely when he has to work all day. Just like during the pregnancy, George continues to make sure I take care of myself for the babies’ sake.  He insists that I drink water and eat well so they get plenty of good milk.  When he’s around he helps wash pump parts, label milk bottles, and do milk drops at the NICU.

George may be new to the gig, but he is already an excellent father.  I can’t wait to see how he hones his super dad skills as they grown older.  I see lots of imaginary games, camp outs, and nature talks in our future.  There is no one I would rather share this amazing adventure with than George and for him I am thankful. 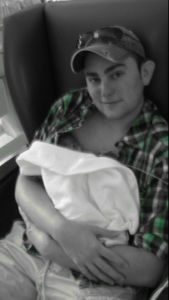 George and Harper in kangaroo care. It melts my heart when George decides to kangaroo someone.

George gets his hands dirty even when he’s suited up! Sydney and her stinky diaper couldn’t keep him away. 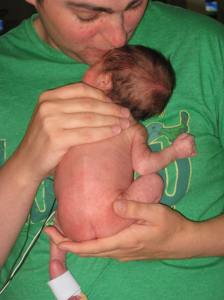 Rylin just after her bath. 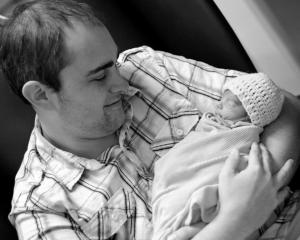