When our friends, Neha and Kristen came to help with the babies last week, I really wanted to do something that would be difficult without four adults.  I spent a good portion of the day deciding what missions I wanted to tackle and came up with two: 1. Do a first birthday photo shoot 2. Take the babies out to dinner.  You may remember, we took the babies out for dinner several months ago, but at the time they were tiny and not ready to enjoy the scenery.  At 10 months old, they can sit in high chairs, eat finger foods, and soak in their new environment.   Plus, they really need the occassional field trip.

The three of us attempted the photo shoot before George arrived home from work and it was dicey to say the least.  Needless to say, mobile babies are not so easy to capture as infants who lay still.  After squeezing four babies into beach wear, we spread a quilt outside in the shade and toted the babies outdoors.  Neha and Kristen enthusiastically blew bubbles and tossed a beach ball in a futile attempt to engage the babies.  As soon as we’d get all four situated, one or more would make a mad dash to the grass or would yank someone else’s hair.  The babies were far more concerned about exploring the back yard, or in Sydney’s case snuggling up on the quilt for a nap.  As the three of us furiously smoldered in the Texas heat, we gave up on an outdoor shoot and hauled the babies back indoors.  They were just as active inside as out so we turned on a Baby Einstien DVD.  My little trick kept the babies together, but they were hardly still and of course they craned their necks to see the television.  All I can say is we tried.  I showed George the “good one” and he made the mistake of saying, “But no one is smiling.”  Getting them together was nearly impossible so smiles were low in the priority list. 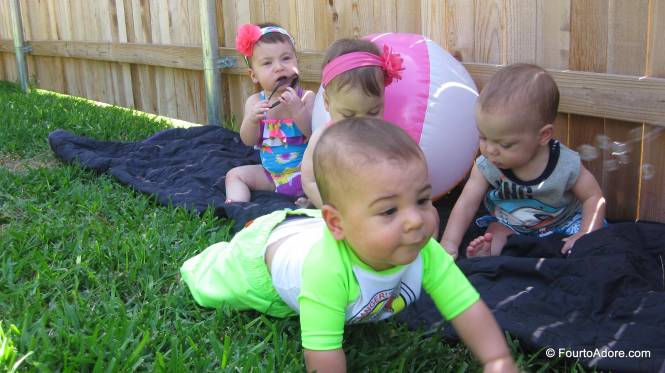 Harper is darting out of the photo as the other three have other priorities as well. 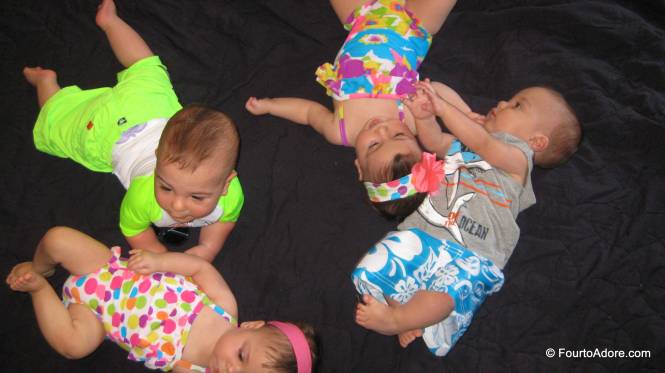 I thought it would be cute to lay the babies on the quilt with their heads together. They disagreed. 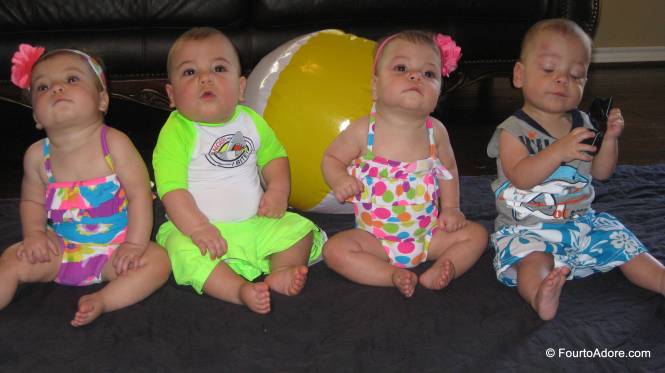 And, this was a “good one”. All babies are together, but as you can see it was not the money shot.

Thankfully, the second mission was far better than the first.  Although it was witching hour, I thought dinner out might be refreshing for the babies. I didn’t think Jason’s Deli would be bustling on a Tuesday at 5:30 pm either.  After we fed the babies dinner, we loaded them into the van armed with an arsenal of baby supplies.  Once at Jason’s Deli I scooted in first with Super Seats as the other adults unloaded the babies.  I scouted out a long table where adults could sit in the middle and anchor the corners with babies.  After attaching each Super Seat, we adorned each baby’s spot with adhesive place mats and littered them with Cheerios.  As soon as we knew the babies were content, the adults took turns ordering.  There was just enough time for us to enjoy dinner while the babies entertained themselves with Cheerios and making observations. 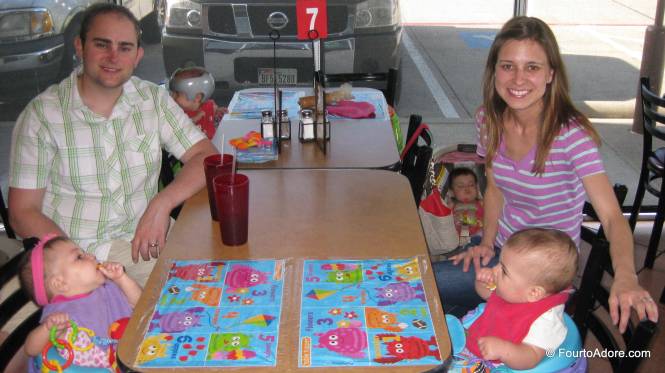 Can you spot all four babies?

Mason was enamored with the little girls seated behind us and spent most of the time craning his neck to see them.  At just 10 months old, he is already proving himself to be flirtatious.  Meanwhile, Sydney found the ceiling fans to be fascinating.  We were able to enjoy our meal and some conversation while the babies simply enjoyed the new scene.  Breakdown was a breeze; I pulled up place mats and wadded them into the trash, stacked Super Seats and loaded car seats.  We arrived home just in time for pajamas and the last call bottle. 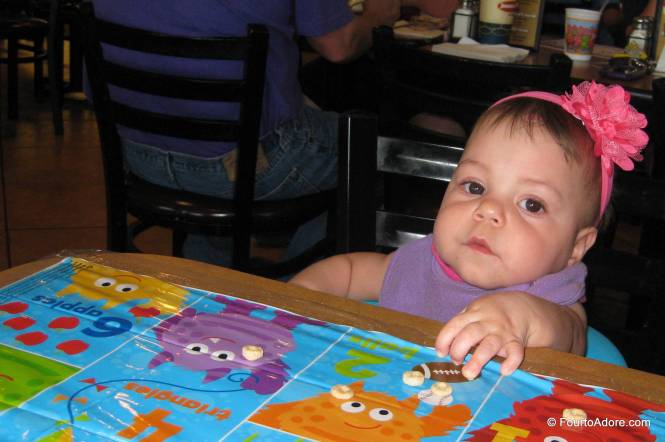 Sydney looked so tiny sitting at the table. She had to stretch her arms and fingers out just to reach the Cheerios. 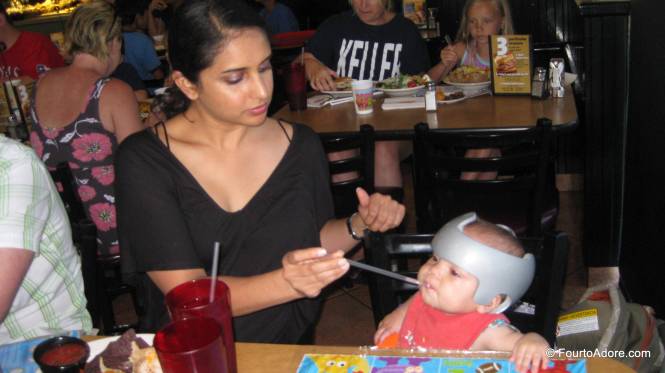 I brought Sippy cups and then left them in the van. We improvised with cups and straws. 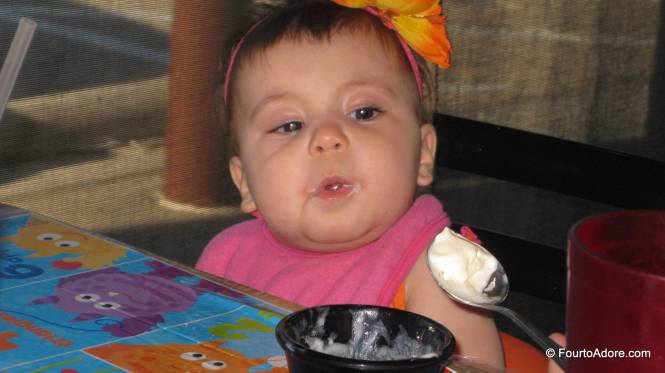 The babies each got their first sample of ice cream. I wanted to make sure they were okay before their birthday. 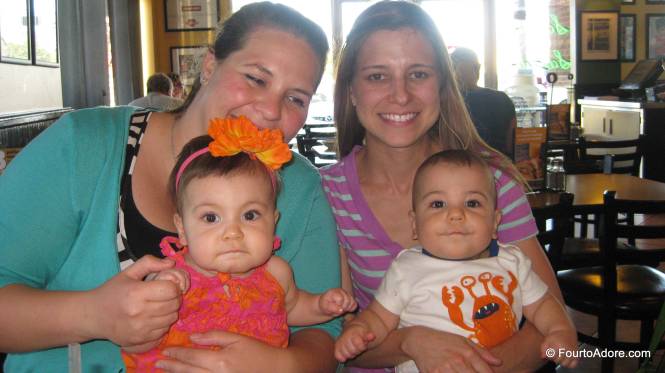 Each adult was assigned a baby Kristen: Rylin, Me: Harper, George: Sydney, and Neha: Mason. 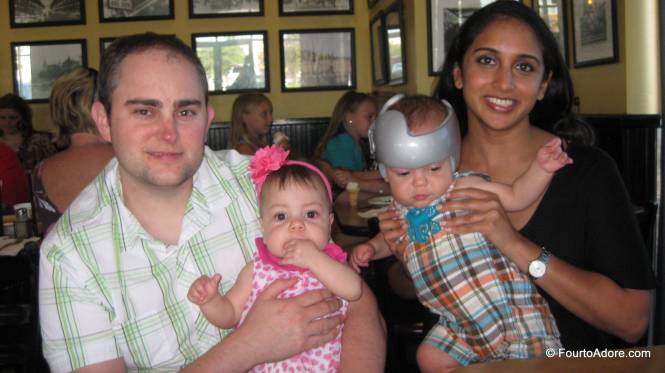 8 thoughts on “You Win Some, You Lose Some”