It’s time for our weekly link up with A Beautiful Ruckus for The Little Things Thursdays!  Yippee!!!!

1. One day during witching hour, the babies took a field trip to a faraway land…The Foyer & Dining Room!  The babies rarely get opportunities to venture into this part of our house, but they clamor at the gates in hopes of finding a chink to escape.  I blocked the opening between the kitchen and dining room, removed all glassware, and foreseeable baby hazards then let them explore.  They were fully entertained for nearly an hour!  Mason found the antique handles on our English liquor cabinet amazing while Sydney took up post at the window fussing at anyone who dare come near.  Harper naturally discovered the final remaining spring behind the door and flicked it with his chubby fingers.  Rylin seemed just to enjoy crawling in wide open spaces.  Maybe in a few weeks, we will revisit this exotic destination.

Sydney actually explored the entire globe from the dining room.

Don’t mind the dust bunnies and other gross stuff seen on the floor. The maid hasn’t been here in a while.

Rylin and her sidekick, Lily take on the dining room.

This window is just Sydney’s size. 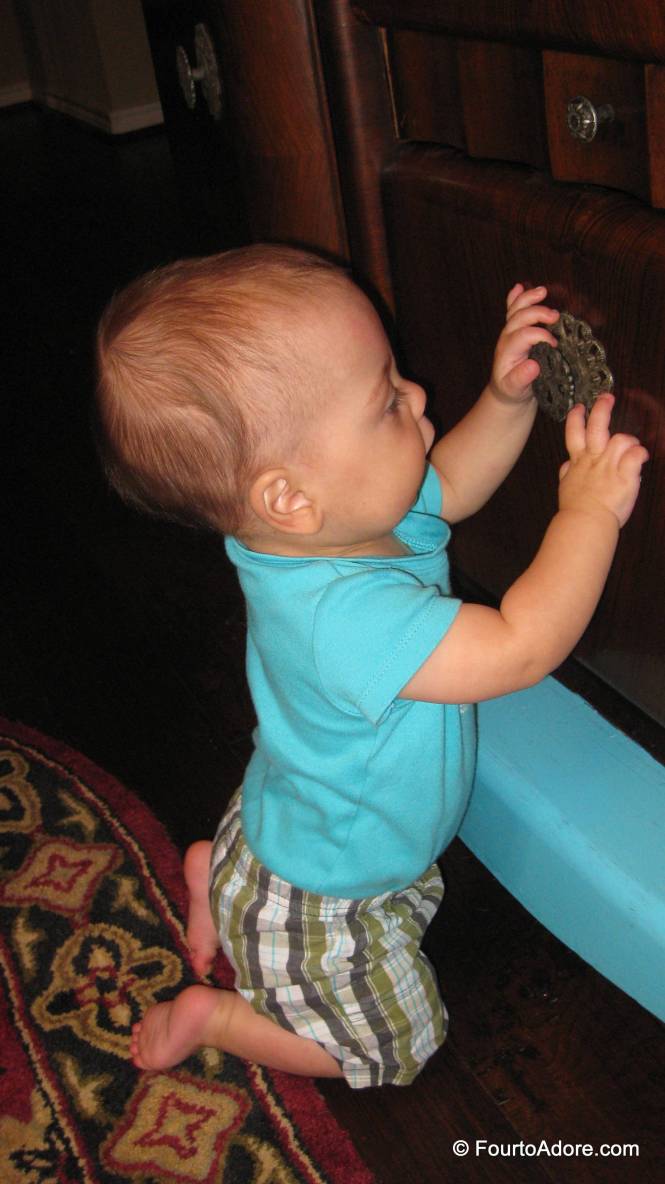 Oh how fascinating handles can be!

2. I won, I won!!!!  I actually won the Simply Sweet headband giveaway hosted by fellow quad family, The McCleary Quadruplets.  If you ever wondered about blog giveaways, yes someone wins them!  They are always worth entering if you are interested in the prize.  I am also excited about being nominated for the Leibster Blog Award from Lily and the Bee.  That one gets it’s own post later, but I’m excited now!

3. My friend and co-worker, Kristin, promised her two kids a “surprise” on Monday.  Unbeknownst to them, the surprise was a day with the quads.  At first, I don’t think her teenage son, Robert was terribly impressed.  However, the quads worked their magic and won him over before the day was done.  Carolyn has been itching to play with the babies, namely Sydney, since before they were born.  Preemie babies and lock down put a damper on her play date dreams, but it finally arrived.  Here’s what Kristin had to say:

“My kids were in heaven. We played, babies took naps, changed diapers, folded baby clothes, washed bottles, fed the babies “baby goldfish” when they signed “more”, mixed the goldfish in with Cheerios (all the babies could discriminate the goldfish and picked them out no problem with a pincer gasp..my OT friends would be proud of me!), played some more, fed the babies dinner, Amber was able to give them individual baths instead of two by two, had more bottles, watched Baby Einstein, and put the babies to bed! 8 hrs with the 4 of us and I’m pooped! Amber and George are rockstars! They make it look so easy! What a blessing these four precious, HEALTHY babies are!!!!”

To the Nethers family, it may have been just a summer day, but to me it meant the world.  They sacrificed an entire day of summer fun to be with four busy babies.  It was a tremendous help.   If friends keep stepping up to the plate like this, I may just avoid hiring help a bit longer.

In case they didn’t get enough quad time, Kristin and Carolyn returned the next day bearing Sippy cups and suction cup bowls.  They noticed the babies were wanting to be more independent with feeding themselves and thought we could use these items.  They boys have been using these Sippy cups with success, but “The Hulk” aka Mason figured out how to pull the bowls off the table already.

Carolyn has a special affinity for Sydney. She even noted they resemble each other. 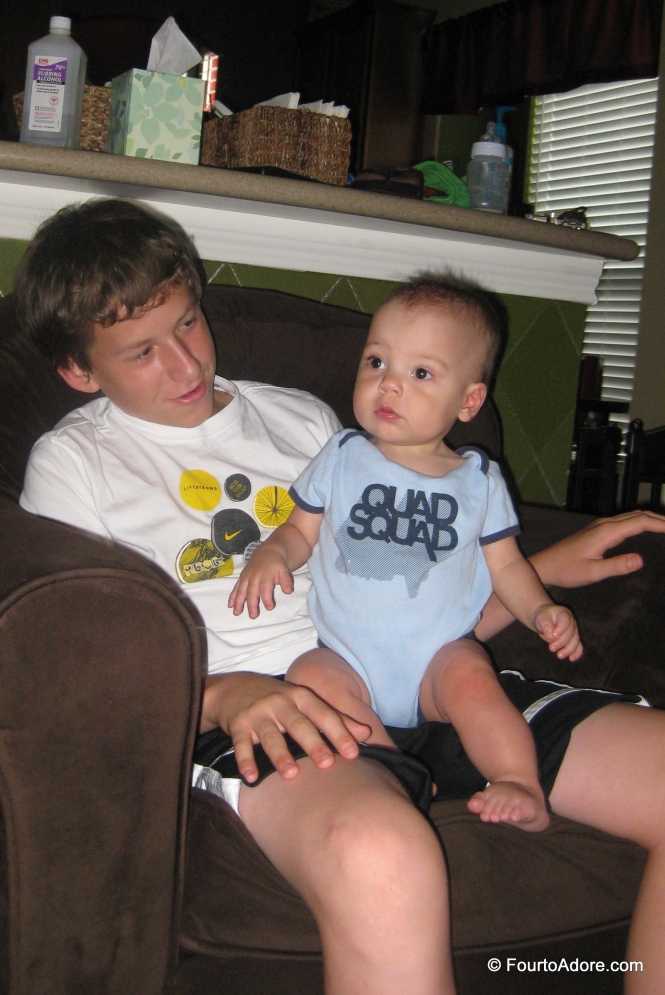 Kristin and Carolyn helped the babies work on signing “more” for baby goldfish or Cheerios.

What little things brought joy to your heart this week?