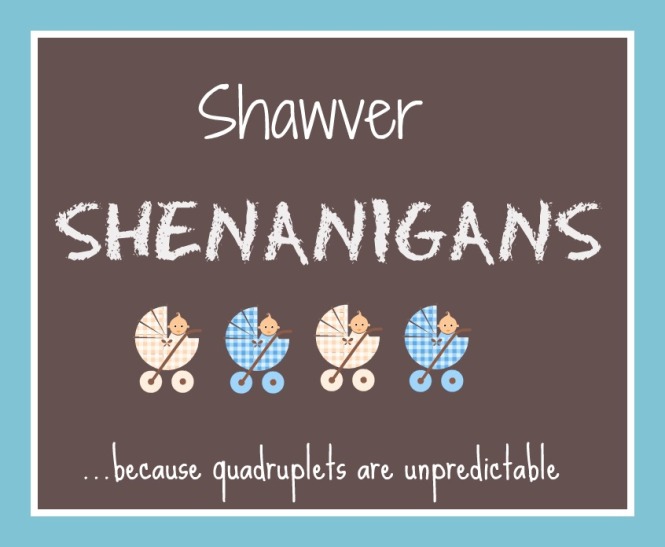 When I review the snapshots taken in a week’s time, it’s apparent that our lives are full of shenanigans, but that is what enriches us and makes life full of JOY!  It’s a clear reminder why God thought quadruplets were just right for our family.  Here are some of my favorite outtakes from the past few weeks-

1. For some reason, the quads are obsessed with sticking their fingers in other people’s mouths.  They think it’s hilarious.  They try to put their fingers in our mouths and constantly stick them in each others mouths.  It happens ALL DAY LONG.  While I was enjoying an Every Girl Gourmet cooking class, George was in charge of dinner and bedtime.  After dinner, Mason began taunting Harper with his fingers that were also grasping a raisin.  George let the camera roll to capture the insanity.  Needless to say, this didn’t end well for someone.  Here’s a video of the raisin taunting shenanigans-

2. One of our friends gave the quads a mini inflatable bounce house.  George and I were stoked to use it the first day we had beautiful fall weather.  George set it up in the backyard to use when the quads got up from nap.  Much to our dismay, they did not appreciate this new toy just yet.  Three of them screamed like banshees because of the sound the generator makes while keeping it inflated.  After my cousin’s kids demonstrated proper bouncing technique, Rylin warmed up to the concept and became a bouncing monkey.  I think they will enjoy it more in another month or two. 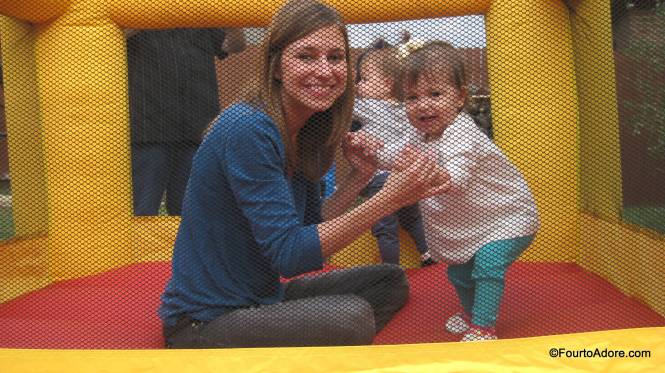 3. As I’ve mentioned before, Harper loves nothing more than to crawl into baskets, boxes, or cabinets.  He recently began taking the drawer out of the kid’s kitchen set.  He gets frustrated when we don’t allow him to push it along our hardwood floors or if he cannot fit inside. 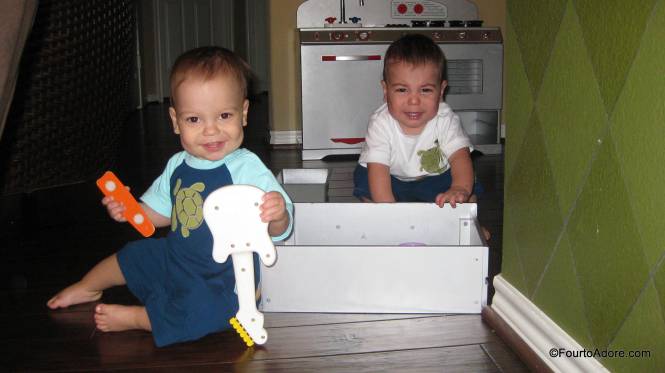 4. We’ve used the same Tommee Tippee silicone bibs since we started spoon feeds at six months.  These bibs have been fantastic for catching dribbles, drops, and spits. I simply wash them under scalding hot water and hang them on a drying rack until the next meal.  As of the past few weeks, these bibs are no longer working for Sydney.  Somehow, she’s managing to get food between the bib and her clothing causing major stains.  She now wears a smock type bib with sleeves that covers her entire outfit.  Harper on the other hand, finds the old bibs perfect for catching food he doesn’t prefer.

What’s shaking in your house?