This post is rather ironic given my recent post about exposing children to toys geared towards the opposite gender.  Several readers pointed out the importance of embracing our innate talents.  I agree with that 100%.   I think it’s wise to allow children opportunities to play with toys that aren’t necessarily for their gender, but not at the expense of their natural talents and preferences.   By design, men and women typically have tasks they are naturally better at than others.  Grilling is one that typically falls within the male domain, and apparently for good reason.

In honor of President’s Day, George enjoyed the day at home with us.  The weather was stunning and the quads enjoyed playing outdoors well over an hour before nap.  Enjoying such springlike weather inspired us to make plans for grilled chicken for dinner.  George and I enjoy cooking together, but when it comes to grilled food, I leave the grilling to him while I manage side dishes.

As the babies snoozed, I made a rub for the chicken and diced  veggies for our salad.  (We try to make the best use of sleeping babies by preparing everything in advance.)  Naturally, they woke up a bit too early and were super cranky so we ushered them back into the yard before dinner.  As the dinner hour approached, we brought the quads in for an Elmo movie so we could wrap up dinner.  This meant George would grill and I’d finish the sides.  Our plans quickly changed when a menacing Little People chicken aggressively jumped in front of George, causing ruckus.  We heard a pop as George tumbled to the floor, narrowly missing the quads.  It was apparent that George had a major big toe injury, which required immediate TLC.  I managed to get the Elmo movie started as I packed George’s toe in ice.  Clearly he wasn’t grilling our dinner- I was.

This chicken wreaked havoc on our dinner plans, and the rest of George’s week for that matter. Poor guy has been forced to wear slippers to work!  If you see this chicken, RUN the other direction!

I knew I could handle it.  We have a gas grill and I already seasoned the chicken.  All I had to do was toss it on the heat, flip it and check it for doneness, right?  Wrong.  George hobbled outside to turn the grill on for me as I gathered my grilling tools: tongs, clean plate, fork, knife, Pam, and of course the chicken.   Once I plopped the chicken on the grill, I shut the lid and headed back inside to finish the rest of our meal.  I figured I’d leave the chicken out there 15 minutes or so then flip it.   Upon my return to the kitchen, the babies became restless and extremely fussy.  Elmo was not entertaining them at all.  I scampered about trying to appease them as I worked. Every five minutes, George reminded me to check the chicken.  I was trying to do a bazillion things so of course, I never would have thought to check the chicken.  In fact, truth be told, I probably would have forgotten it even after 15 minutes without reminders.  Over about a thirty minute period, I tended to the quads, miscellaneous kitchen tasks, and George’s toe.  Thankfully, George periodically continued reminding me to check the chicken.  I found grilling chicken to be surprisingly daunting.  When I cook chicken, I typically use the Crock Pot, oven, or stove and it requires very little monitoring.  I can “set it and forget it”, which is exactly what I normally do with chicken.  Grilled chicken, however demands a little more attention.

Thinking back to social psychology and neurospychology classes, I can recall learning about how men and women filter information differently.  Typically men are able to focus intently on one thing at a time, whereas women divide their attention amongst many different tasks at once.  This is why it drives me insane when the television and radio blare simultaneously and George is unphased.  I hear EVERYTHING from both sources and try to attend to both while he chooses to attend to one while totally ignoring the other.   Having the tenancy to attend to multiple things at once comes in handy when caring for quads, but not so great when grilling.  In the end, I proved myself capable of grilling chicken that looked decent and tasted good.  However, I realized there’s a reason George is better at this task: he can focus on it and only it. 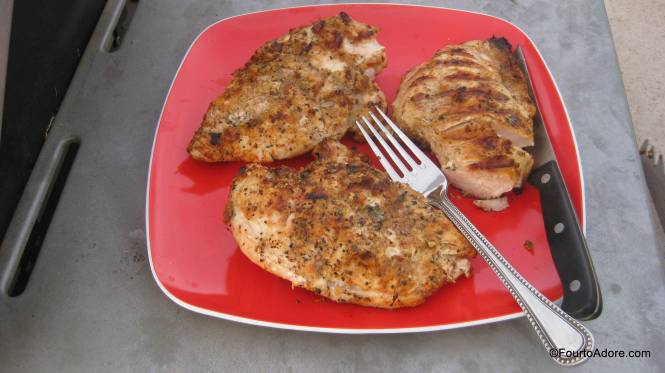 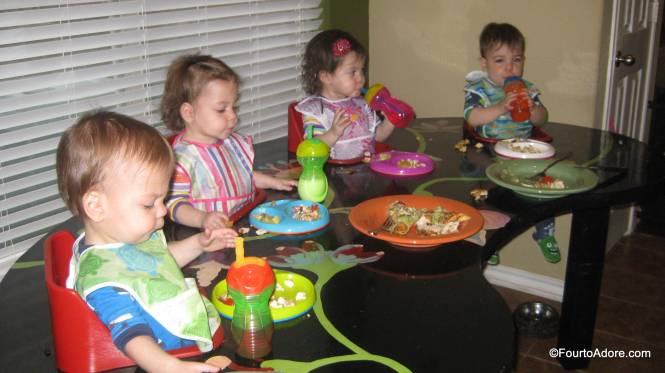 I was pleasantly surprised when the quads gobbled up their chicken since they don’t usually eat chicken well. That night we decided to call chicken “meat” at the dinner table. When we called it “chicken”, Rylin gave us a puzzled look as she said, “Bock, bock???” We weren’t ready to explain that one yet…

Do you focus on one thing, or several simultaneously?  Do you think your answer is related to your gender?