It’s been quite a while since an episode of Shawver Shenanigans.  It’s not for lack of Shenanigans.  At 20 months old, the quads are getting into all sorts of mischief, so much that I can hardly keep up with them.  Another conundrum is that they are quite aware of their behavior and I don’t want to encourage them to continue something undesirable (e.g. climbing on the couch and sprinting) by snapping photos.  Nonetheless, I captured a few highlights hopefully without encouraging bad behavior.

The quads have been doing exceptionally well with using utensils at meals.  Don’t get me wrong; meals are still a total mess.  They are, however,  getting food onto their utensils and they transferring that food into their mouth 50% of the time.  I’m proud of their progress so I thought I’d do a post about how meals are going with a video clip of some of their marvelous self feeding skills.

I prepared a meal that I thought would help them display their emerging skills: meatloaf with mashed potatoes, green beans, and garlic bread.  I thought they’d effortlessly spear the green beans and meatloaf and could scoop the potatoes without them falling off the fork.  W-R-O-N-G!  The quads did not view this meal as a the culinary art of Suzy Homemaker.  Instead, they saw a sensory experience to be seized.  Mason grabbed potatoes by the handful and proceeded to fling them across the table as if it were a school cafeteria food fight.  As I attempted to redirect him, Sydney artfully smeared potatoes in an arch shape across the table.   It didn’t take long before Harper and Rylin joined the shenanigans.  I was horrified it the disaster that was my kitchen.  Not only were my children creating mayhem at the table, but they weren’t eating the meal I prepared with my last shred of energy for the day.  UGH!  The potatoes seemed to be wreaking havoc so I scooped them up and attempted to salvage the rest of the meal.  I can’t win them all, can I? We’ve had many more meals that would be a fantastic example of civilized toddlers using utensils, but I’ve scrapped sharing that.  It seems that when I hit “record”, things go awry. 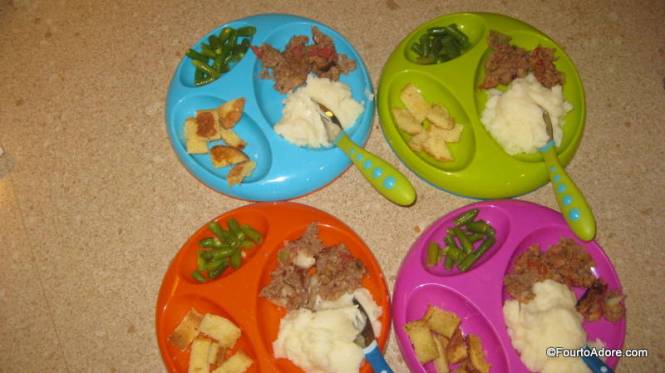 The meal started off as a pretty one.   I tried. 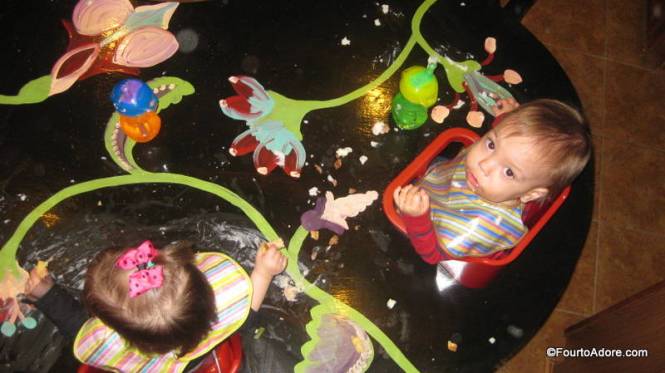 In the evenings, George began a new tradition he may soon regret: piggy back rides.  He lays on the floor, and one or two babies climbs on his back for a ride.  They do surprisingly well checking their balance and hanging on.  Of course, these piggy back rides are at a snail’s pace so if they fall it’s not a big deal.

Sometime after nap and before dinner, the quads get all jazzed up with a second wind.  They take great pleasure in darting up and down the hallways as they shriek creating a reverberating echo.  I’m relatively certain this particular activity contributes to evening headaches, but they are happy squeals so I let them have their fun.

What’s shaking at your house?