This year, my mom charged me with making desserts for Thanksgiving.  My Dad, sister, and I enjoy the tradition of pumpkin pie on Thanksgiving, but it’s not my mom’s favorite.  In order to make something my mom would like, and preserve tradition, I thought pumpkin pie cheese cake would fit the bill.  I found a recipe for Pumpkin Cheesecake bars, but it wasn’t pie-like enough so I adapted it.

As I made my shopping list, George reminded me that instead of using canned pumpkin, I could roast sugar pumpkins for a more robust flavor.  And, better yet, I could use the sugar pumpkins from the Flower Mound Pumpkin Patch to make fresh pumpkin puree.  I was slightly hesitant since these pumpkins had been on our porch a while.  George gently reminded me that pumpkins sit outside at pumpkin patches all season and are still good to eat as long as the flesh is firm.

Roasting sugar pumpkins is a simple process, but I was thankful George took over and involved the quads.  First, he washed the pumpkins well and peeled the monogramming from them so the paint wouldn’t leech inside.  Next, he cut the pumpkins in half and scooped out insides.  Finally, he laid them face down on a foil lined baking sheet.  They roasted in the oven for an hour at 400 degrees. 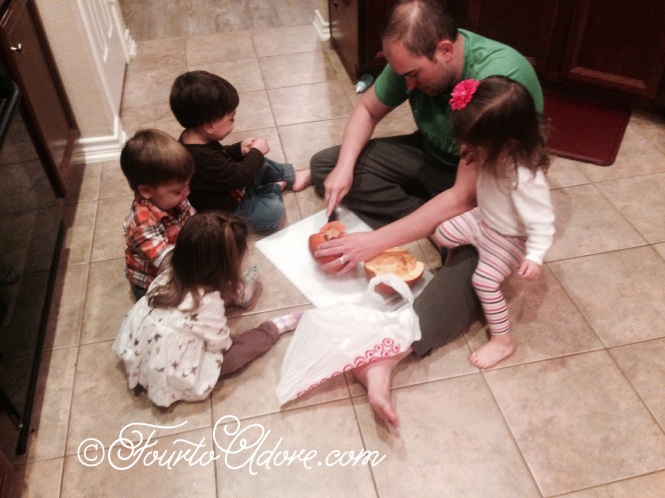 The quads took turns helping to scoop out the insides. 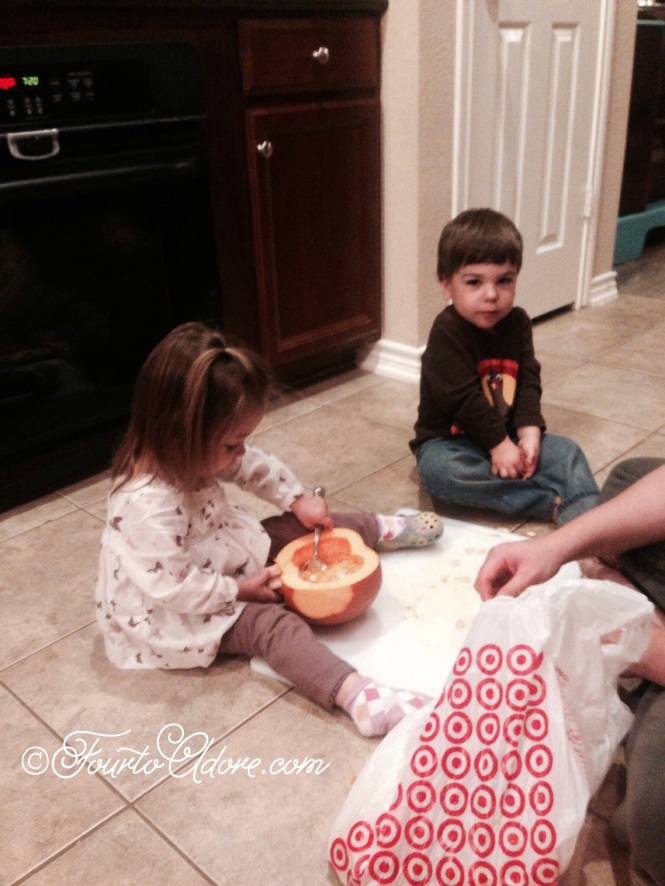 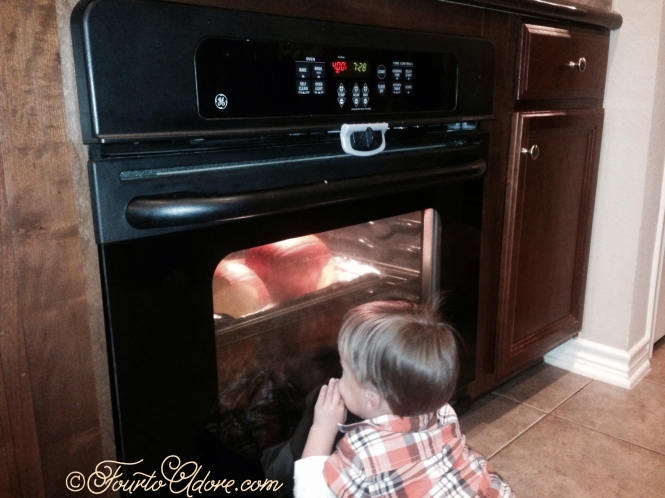 The aroma of roasting pumpkin was delightful!  Once the pumpkins were roasted, we removed the skin and pureed the pumpkin in our food processor. 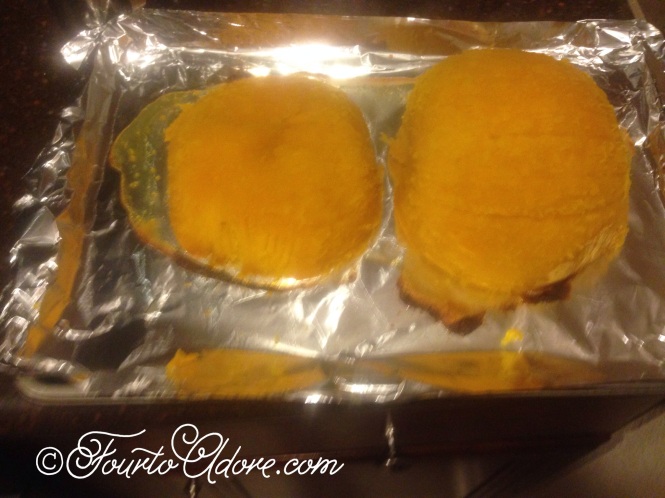 I added about a cup of water to the food processor to smooth the pumpkin. 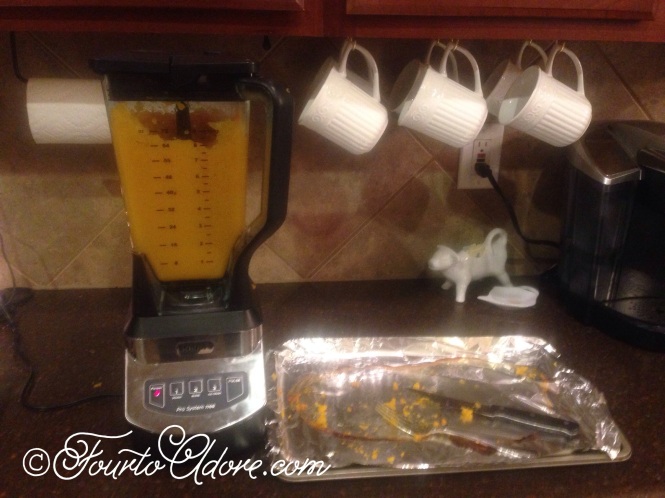 Once the pumpkin was done, I used it to make my Pumpkin Pie Cheesecake. 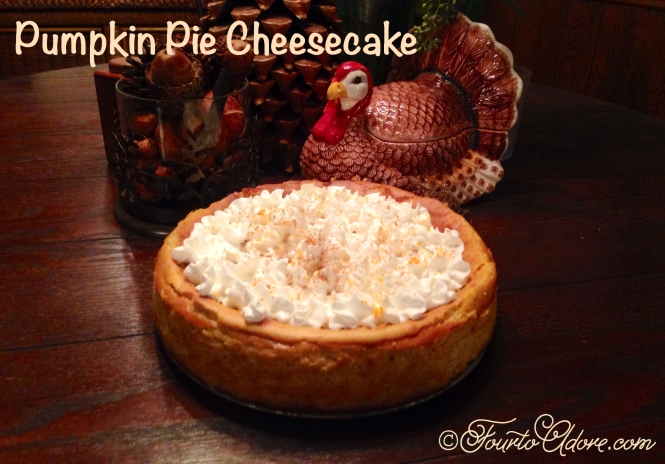 To make your own Pumpkin Pie Cheesecake, you’ll need the following:

Preheat the oven to 350 degrees.  In a spring form pan, combine graham cracker crumbs, sugar, and butter then press evenly across the pan.

Bake at 350 degrees for an hour.  Remove from the oven and allow to cool before refrigerating.  Keep in the refrigerator at least 3-4 hours before serving.  Garnish with whipped cream and pumpkin pie spice.

I was admittedly a tiny bit nervous about serving a dessert on Thanksgiving that I created and had never tasted before, but felt confident in the ingredients.  It was a winner and enjoyed by everyone, including the quads!  I think it will be on our Thanksgiving menu annually. 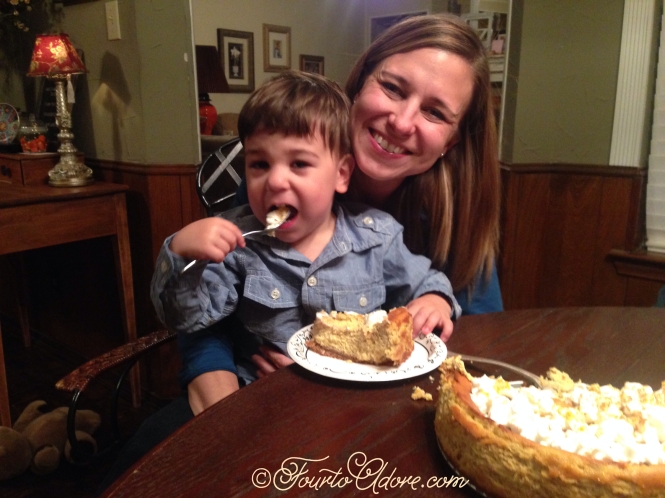 I had quite a bit of pumpkin puree leftover after baking my pie.  I decided to use the remaining puree to make Spiced Pumpkin Soup from a recipe we clipped from a magazine years ago (we’ve had it so long, I don’t know the original source). 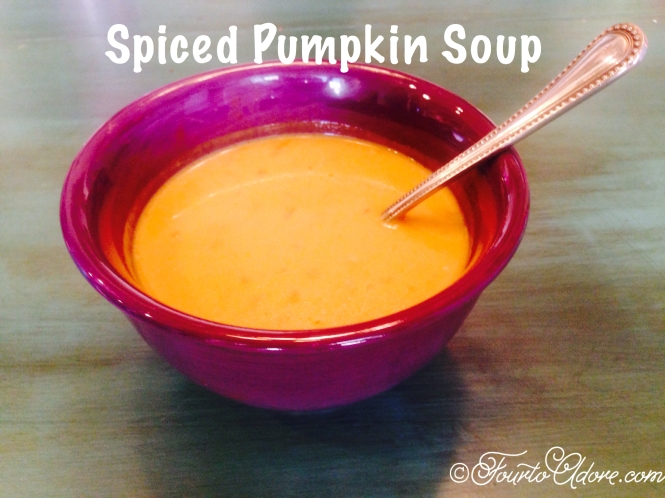 Melt butter in a stock pot then saute onions until clear.  Add garlic until aromatic then stir in spices.  Cook about another minute.

I’ve been enjoying our spiced pumpkin soup for a few days and have enough to freeze for later.  From the farm to the table, our pumpkins had a quite a lifespan, and I’m happy they didn’t end up in the garbage.

What is your favorite pumpkin recipe?

P.S. Now that Thanksgiving was fully celebrated, the Christmas decor commenced at our house!