The past week was drizzly cold one and we had four sick toddlers held hostage in the house.  Whining reached epic proportions (not just the kids…parents included).  Desperate to change the pace without actually leaving, I set up high tea for lunch one day.  The quads received a lovely ceramic tea set from Aunt CiC this Christmas and this was just the occassion.  She scored the set at a local Asian market for $1 per piece, which was a brilliant idea because I know it’s food safe and we can add pieces later if needed.

While the quads watched an episode of Sesame Street, I prepped a meal fit for tea.  I created a spread of peanut butter and honey sandwiches, sliced strawberries, and veggie straws.  I also made a small kettle of lemon honey decaf tea (the best stuff for scratchy, sore throats!).  For new scenery, I set the kid-sized table in the playroom with all the needed accoutrements for tea.  Although the tea set was inexpensive, I was admittedly nervous someone might decide to chuck a dish or two; eating at the kid table would mean a shorter distance to the floor. 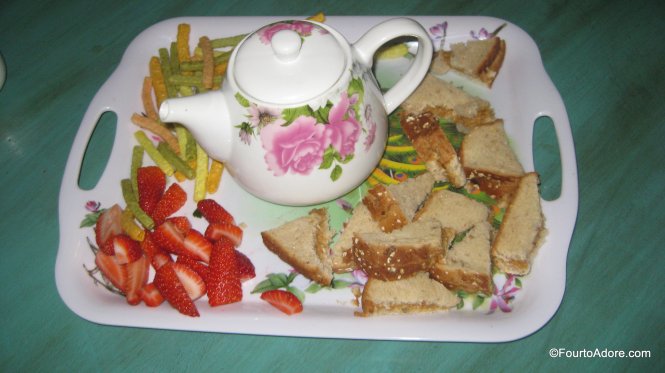 Once Sesame Street wrapped up, I invited the quads to join me for high tea.  I explained that we were using our special tea set from Aunt CiCi and it could break if anyone did not respect it.  I emphasized that all dishes were to stay on the table and needed delicate care.   Eight doe brown eyes stared into mine as they nodded in agreement.  I still wasn’t sure how this would go.

Teatime proved magical!  All four cheerily noshed on their meal while politely sipping tea.  Not an hour before they were wallowing in misery, tears, and snot.  Teatime also turned into a great opportunity to practice manners.  Since I poured only a sip or two worth of tea into the cups so they had to request more by saying, “more tea please”.

My low appetite kids managed to scarf three peanut butter sandwiches, a pint of berries, and several handfuls of veggie straws, all washed down with four cups of tea.   Getting sick kids to eat is a win in it’s own right!  Our impromptu tea party went so swimmingly that we held another today, and it went equally well.  I think tea parties may become part of our TLC routine when everyone is sick.  It certainly brightened everyone’s glum spirits. 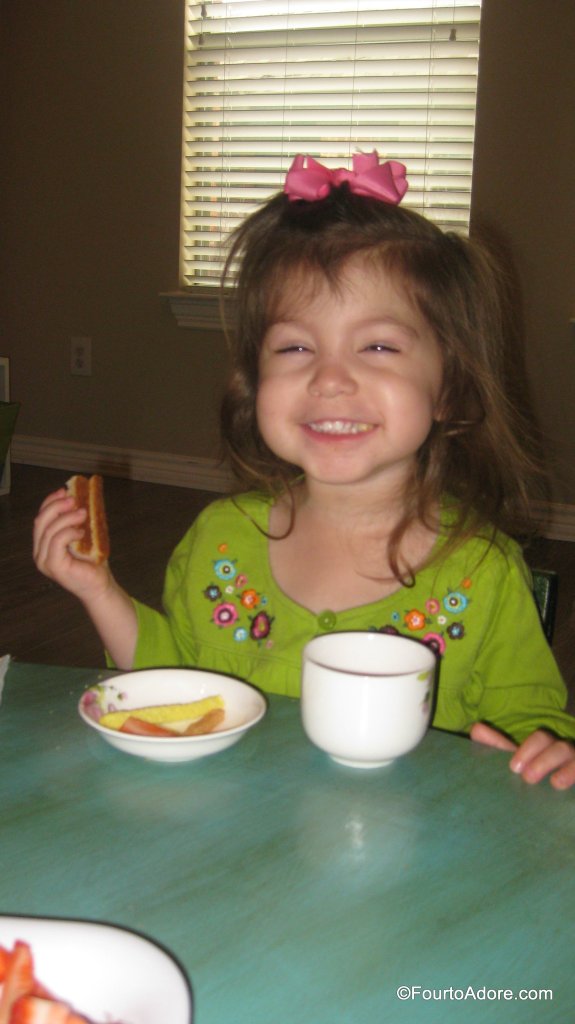 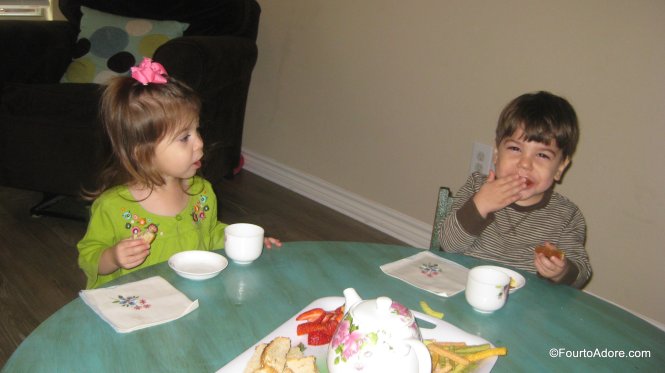 As an added bonus, tea cups were great open cup practice.  Everyone did very well sipping, and not one drop of tea touched the floor.  Only two of the four dribbled onto their clothing, but it was minimal.

What is your favorite way to nurse a cold?  I used to love it when my mom made buttery baked potatoes with iced Sprite.