A hair emergency must be a rite of passage for both childhood and parenthood. For most, it’s the obligatory snip to the tresses.  For some, it’s a dye job gone awry.  When I was about ten it was the home perm kit my mom tried on me.  I ended up with frizzy frayed hair that split in the front creating awful wispy hairs.  It took months for it to grow out again.  It was not a good look.  When my sister was about four years old, she leaned forward to blow out a candle and successfully ignited her bangs.  Yipes!  Luckily for her, it was only a quick singe before the flame was snuffed.  With quadruplets, I knew something similar was bound to happen, and it certainly did.

When I cook dinner, I usually give the kids sensory activities, puzzles, or crafts to work on at the kitchen table.  Among their favorites are Play Doh and kinetic sand, so I knew flarp

(a birthday gift) would likely entertain them for a solid hour.  They were indeed enamored with the drippy doughy stuff.  Periodically, I peeked over at them and found stretching, pressing, and molding, which was fine.  When I spied someone putting flarp all over their arms, I redirected them immediately. However, just as I popped our lasagna in the oven, I froze.  Sydney’s pigtails were streaked with neon orange flarp. GAHHHHHHHH!!!!!  Hair emergency, an hour before company was expected for dinner. 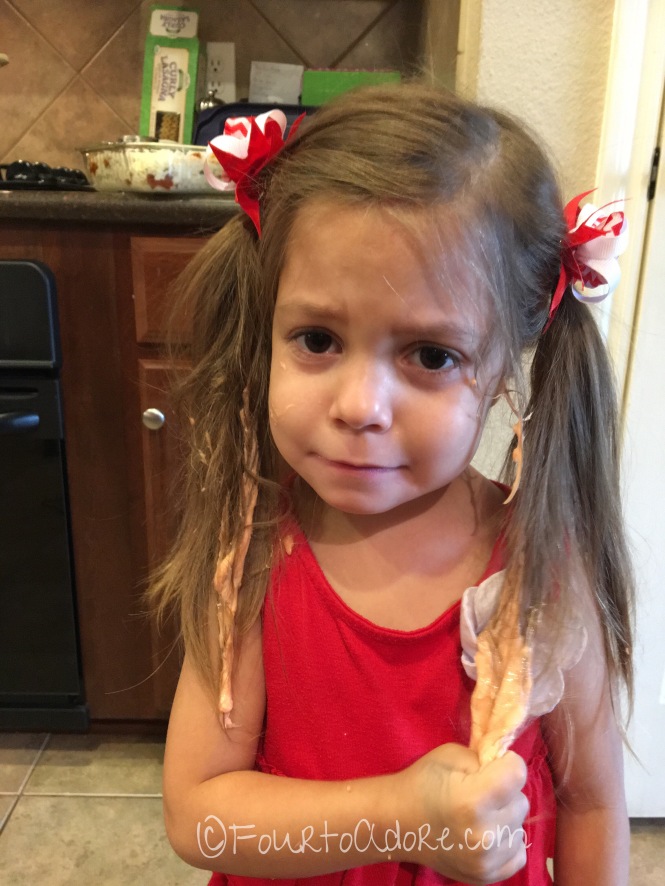 Instinctively, I began trying to pull small bits of the goo out, but instead of removing flarp, I was mostly pulling out precious hairs.  Clearly this wasn’t the best method for flarp removal.  I panicked, imagining we’d have to go to the salon for a new hair do.  First, I decided to contact my friend and hair stylist, Kristin.  She asked for a list of all available oils and butters.  I came up with coconut, olive, canola, Crisco, butter, peanut butter, and baby oil.  Her recommendation was to coat small sections of hair in baby oil.  Then, use a fine tooth comb to pull flarp from one inch sections of hair.  I stripped Sydney down to her undies and situated her in the bathtub while I ordered the other three kids to stay in the playroom, no exceptions.  After separating the untouched hair from the goopy stuff, I got to work.  Much to my relief, it actually worked.  Within about 25 minutes, I removed about a quarter cup of sludge from Sydney’s hair and none remained on her head.  Thanks to the baby oil, Sydney looked like a grease monkey for several days, but no hair was trimmed in the process. Her hair was restored and I’m hoping she’ll keep gunky stuff out of her hair. 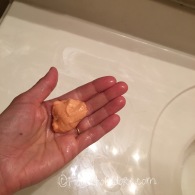 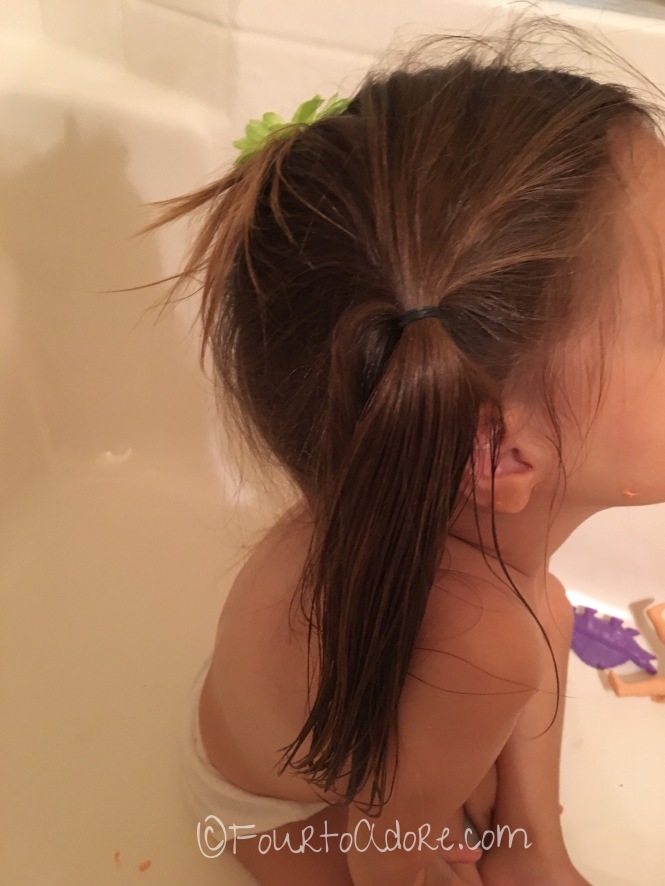 Have you experienced a hair emergency?

2 thoughts on “Hair Emergency {How to Remove Flarp from Hair}”