You may have noticed that The Little Things Thursdays have become the highlight of a blogging week for me.  That’s because the babies have been falling out of nap sync.  It’s a travesty really.  Inevitably they all go down then one wakes up bored in his or her crib and lets the others know of said boredom.  This all means I have significantly less time to accomplish things such as blogging.  Don’t worry, I LOVE writing and blogging so I don’t plan to stop, I just don’t get to it as much as I’d prefer.  I’ve got at least two or three good posts in draft mode that I never seem to revisit.

1. On Saturday my sister and I took the babies in the Runabout for the community garage sale.  Every good garage saler knows you have to start early before all the best stuff is snagged, but as a schedule-bound quad mama I knew that going out early would inevitably interfere with naps.  I went against my reservations and we headed out right about the time babies would normally settle in for naps.  I really worried we would stroll down our street and experience Def Com 5 with four wailing babies.  To my surprise they did great!  They took turns snoozing and lapped up all the attention they received from complementary onlookers.  I am certain they know a compliment when they hear one because they all beam.

To ease crib doldrums, my goal was to find as many crib toys as possible.   Just by cruising a few blocks, I scored three crib soothers (these really cool aquarium looking things that play music and move when the babies push buttons), a crib piano, a caterpillar crib toy, a swimming duck bath toy, and a bubble machine (all for under $30).  I priced crib toys prior to heading out and learned that full retail is about $35-65 each!  Multiply that by four and you’ve got the start of a college savings account.   So far, the crib toys have helped quite a bit, especially for Rylin.

Isn’t this bubble machine cute? It plays music while blowing bubbles and has colored piano keys that say color names when pushed.

2. The babies received these nifty baby swings for Christmas, however we had trouble figuring out where to hang them.  We hoped they could hang from our pergola, but decided it wasn’t sturdy enough.  Then George considered building a swing set frame himself.  As always, we are budgeting not just money, but also time.  I found a patio swing set frame on Amazon (the source of almost everything in our home nowadays) for a mere $70 shipped.  It took George less than 20 minutes to assemble and we were set for summer swinging fun!  Just like at the playground, Harper and Sydney don’t seem terribly interested in swings, but Rylin and Mason relish it.

Mason’s dimples tell all: he is having fun! Syndey, well she seems content at least. 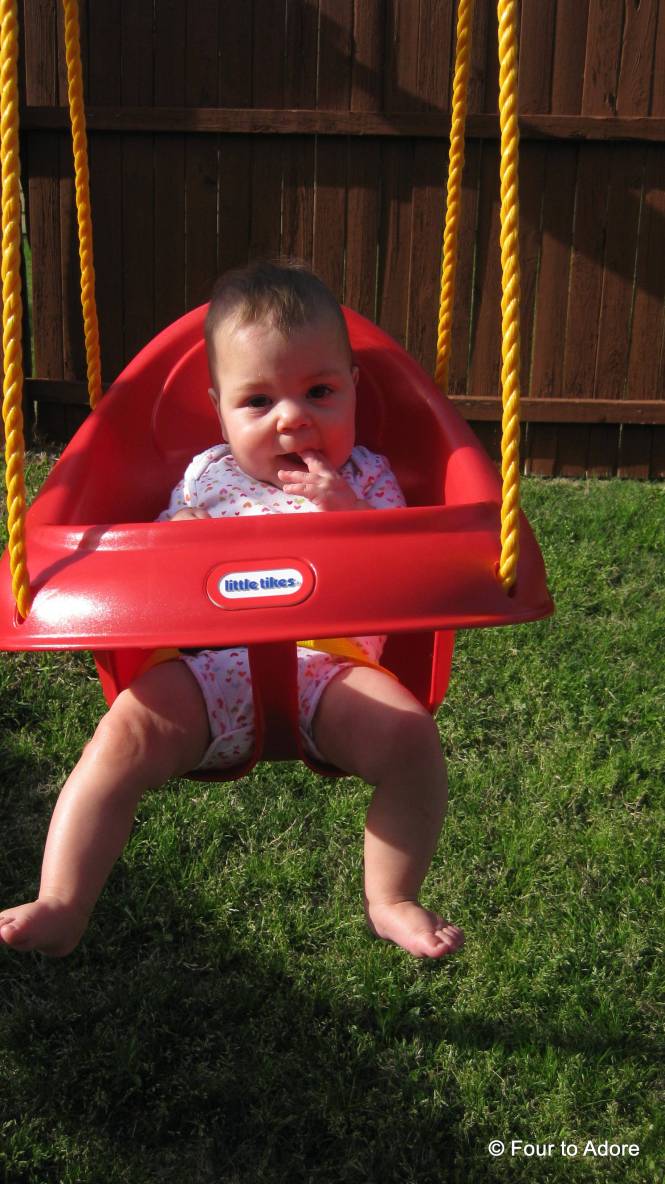 3. Prior to having quadruplets, I only drank coffee on Sundays when we made a hearty breakfast.  I’m really not much of a coffee drinker and can’t handle a strong brew.  I never understood why people say, ” I NEED my coffee”.  That was until I brought home four tiny babies who needed round the clock care.  Out of pure necessity, I started a habit of drinking one cup of coffee every morning during the babies first nap.  That being said, I’m still no coffee aficionado,but I NEED my coffee!  I became bored with the 80 cups of a single flavor from Costco and ordered some new ones instead.  My spring favorite is blueberry!  It seems odd, but blueberry is a great compliment to coffee, it reminds me of chocolate and orange together.  Yum-o!

The blueberry pairs nicely with a dash of sugar and splash of half and half.

4. Don’t forget to vote for Four to Adore on the Circle of Moms Top 25 blogs list.  It’s easy!  Just click the badge on the sidebar of our home page (or below), then click the “pending” tab, finally scroll down to our picture and click vote!  Just three clicks is it!  In a day or two we should be off the pending list so we will be on the page right after you click the badge.  You can vote daily through May 8, 2013.

What little things filled your week?

Last year when I first began writing this blog, I learned about the Circle of Moms Top 25 lists, which recognize special interest blogs. I was especially excited to find out there was a top 25 blogs for multiples list. At that time we weren’t actually raising quads so weren’t yet contenders. This year, however, is different. We are entered so its game on!

George and I are extremely competitive (seriously, we’ve settled arguments via card games and love board games!).  When we compete, we are in it to win it! Please help us out by clicking the “vote for me” badge pictured below or on the sidebar of our homepage. You can vote daily through May 8, 2013 so please try to vote and vote often.   There is a lot of stiff competition, especially from other quad blogs so we need your help, please vote and ask others to vote too. It’s easy!