As of Thursday, the babies turned 11 months old! While they are an increasing challenge, the babies are also becoming fun little people and more entertaining every day.  They are so busy in fact, George and I are putting serious thought into carving out funds for a very part time nanny or housekeeper.  I continue to enjoy spending lots of time with the babies on my own.  Without long daytime naps, maintaining the house while enriching the babies is not so simple.

At 11 months, I’m both proud and relieved to see them begin to catch up to same age peers with regards to developmental milestones.  Harper and Rylin were dismissed from Occupational Therapy several months ago, and Mason and Sydney are soon to follow suit.  The babies are all doing the following things:

crawling with tummy off the ground

pulling up onto furniture and toys

transitioning from tummy to sitting and standing to sitting

cruising along furniture and walls

picking up finger foods with a pincer grasp

eating chunky purees, including our dinners

using cause/ effect toys with switches or buttons

discriminating between familiar and unfamiliar people

listen to stories and songs

turn pages of board books

In addition to group milestones, each of the babies has a few tricks of their own. 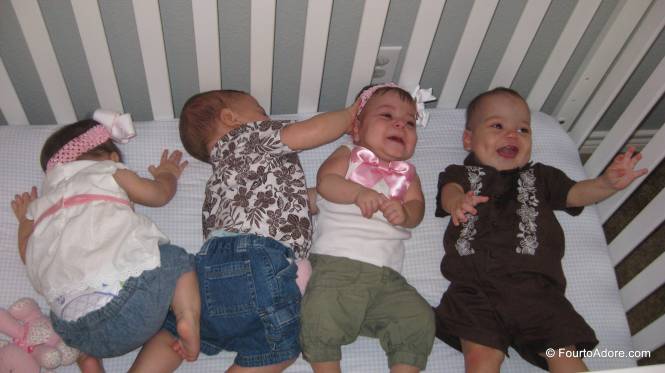 The days of babies laying still in a crib is a officially a thing of the past!

We had some fun capturing the babies documentary style. 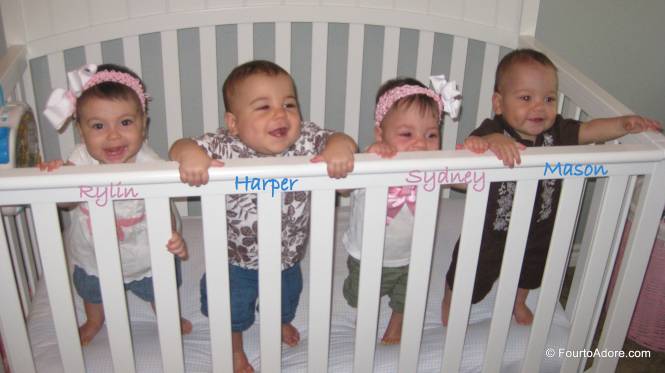 Here is our obligatory 11 month crib picture. They may not lay still anymore, but I love how they stand.

Of the babies, Rylin has the widest repertoire of facial expressions.  She can go from a scowl to a wide mouthed grin, letting her emotions be known.  She has been enjoying clapping for a while and signs “more” with ease.  Rylin also enjoys playing a modified version of catch and showing her four teeth.

Harper is generally happy and loves grinning so his bottom two teeth show.  He recently learned how to sign “more” and does it frequently.  When frustrated, he holds his arms out wide and turns his wrists in little circles as he protests.  He knows the word, “no” and turns around when verbally redirected. 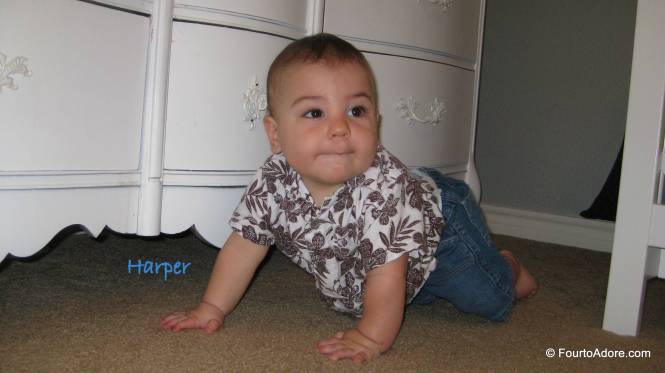 Sydney is a girl with the gift of gab.  She talks almost incessantly saying, Dada, Dad (which she spreads out emphasizing the vowel), Mom, Mama, Tatata, and several others.  Sometimes, I am certain she said, “I did it!”  Apparently Syndey prefers that her personal space be respected.  When she is playing alone, she feigns injury if another baby invades her territory.  She is particularly fond of Lily and gingerly strokes her fur.

Mason as usual conquers the motor milestones with ease.  He has been crawling well over two months now and recently began pulling up onto objects to get a better view out the window or onto a table.  While the others are close, he is the only one who uses a sippy cup independently.  When asked, “Where’s your nose?” he often crinkles his nose as he lets out a little snort, which is hilarious.

I can’t wait to see what “the BIG one” brings!

9 thoughts on “Nearing “The BIG One””