Several weeks back, the babies’ Wubbanubs (pacifiers attached to little animals) began mysteriously disappearing. I was certain our babysitters were putting them away in unusual places (e.g. in toy boxes) and repeatedly asked them where they put said Wubbanubs. None of them could recall misplacing a Wubbanub. Nonetheless, I gently reminded them Wubbanubs are for sleeping only and stay in the cribs. Then one day I decided it was time to wash the sheets and the dog beds. That’s when I uncovered a cache of MIA Wubbanubs, Soothie pacifiers, and teethers. Sasha apparently snatched them off the nursery floors and covertly buried them in her bed! The little sneak! 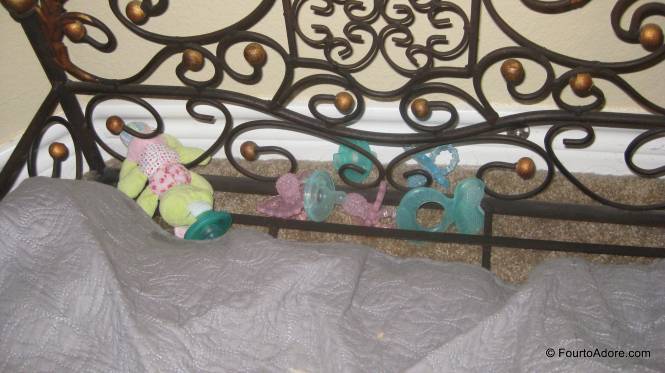 These were recovered from one of Sasha’s routine Wubbanub Raids.

Once Sasha was identified as the culprit, I kindly asked our babysitters to check the nursery floors to make sure the dogs could not snatch Wubbanubs (the babies are keen on the whole gravity thing and relish tossing Wubbanubs onto the ground). My efforts were fruitless. The Wubbanubs continued disappearing, but at least I knew where to find them. One night, George whispered, “You’ve got to see this…” I hesitantly trailed him to the girls’ nursery where we spied Sasha poking her nose between crib slats then gingerly pulling a Wubbanub out. Of course I didn’t have my camera handy so I missed capturing it. I stalked that little Peke-a-Poo for days trying to recreate her clandestine affairs, but she was onto me. I’d notice her padding down the hallway and would grab my camera, but each time she’d turn around and abandon her raid. I think this shenanigan went on for two weeks before I finally snapped a photo with a teether in Sasha’s clutches. Now that we’re aware of how a Wubbanub Raid is conducted, we try to keep Wubbanubs from her reach, but if one falls victim we always find it in Sasha’s lair.

Here she is attempting to yank Rylin’s pink bear right from the crib. 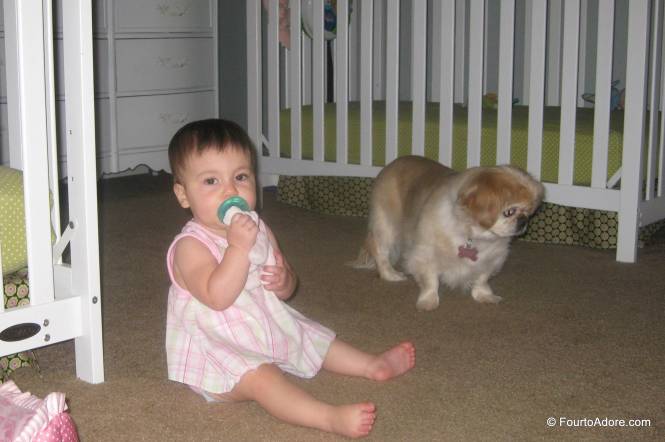 This time Rylin intercepted and saved Pinky. I think Sasha looks a bit ashamed of herself.

And I finally caught her in the act!

Have your pets ever hidden something unusual?