Even though Dr. Knapp gave us his blessing to try peanut butter with the babies after six months of age, George and I wanted to wait until after age one.  There is no family history of food allergies, but kids who have peanut allergies seem to have serious and sometimes fatal reactions so we were guarded with it.  George had the brilliant idea of giving it to the babies just prior to their one year well check.  That way if one of them happened to have the dreaded severe peanut allergy, we’d already be in the doctor’s office.

Last week was the babies routine one year appointment so we took the peanut butter plunge.  I packed animal crackers and a bowl of peanut butter in the diaper bag for the big event.   As soon as everyone was strapped into the strollers, I dipped the animal crackers into the gooey stuff and handed one to each baby.  They weren’t sure what to make of it, but eventually decided it wasn’t bad and a few babies even signed “more”.  George and I breathed a sigh of relief  when no one had an immediate reaction, but kept watch for the next two days.  Even two days later they were all okay!  George and I are both peanut butter fiends and can eat it straight out of the jar.  Therefore, we are overjoyed that  it can now be a protein staple for all family members. 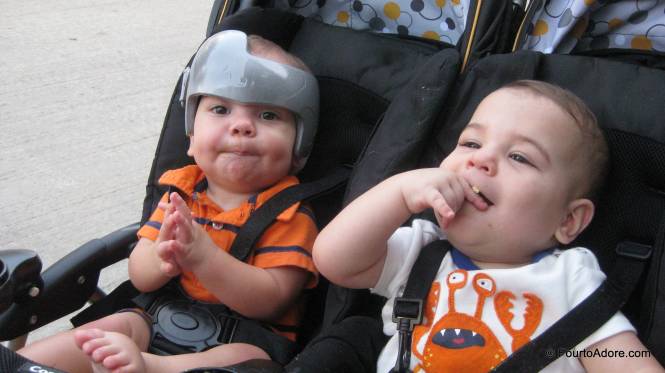 Oh yes, the boys got a share of the gooey stuff, and Mason wanted seconds.

By the looks of things here, Rylin seems to be a fan of peanut butter. Sydney may be indifferent.

Somehow the office was backlogged with appointments, leaving us marooned in the waiting room longer than usual.  Sydney didn’t mind, however. They were doing a screening of Toy Story and the girl was enthralled.  The other babies were antsy and schmoozed their way into laps and the arms of office staff.  Rylin entertained the administrative assistants with her array of facial expressions and giggles while the boys flashed their darling dimples to win favor.

Daddy and the girls 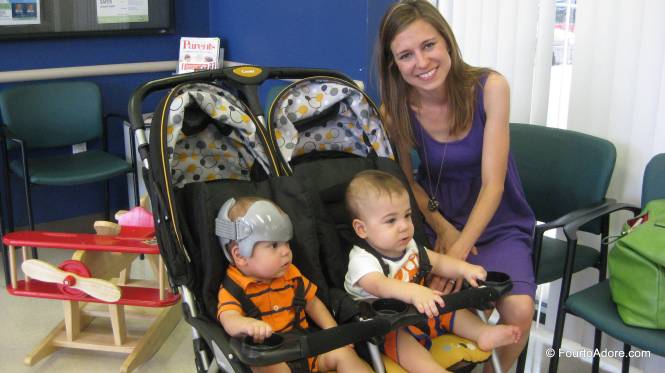 Mama and the boys 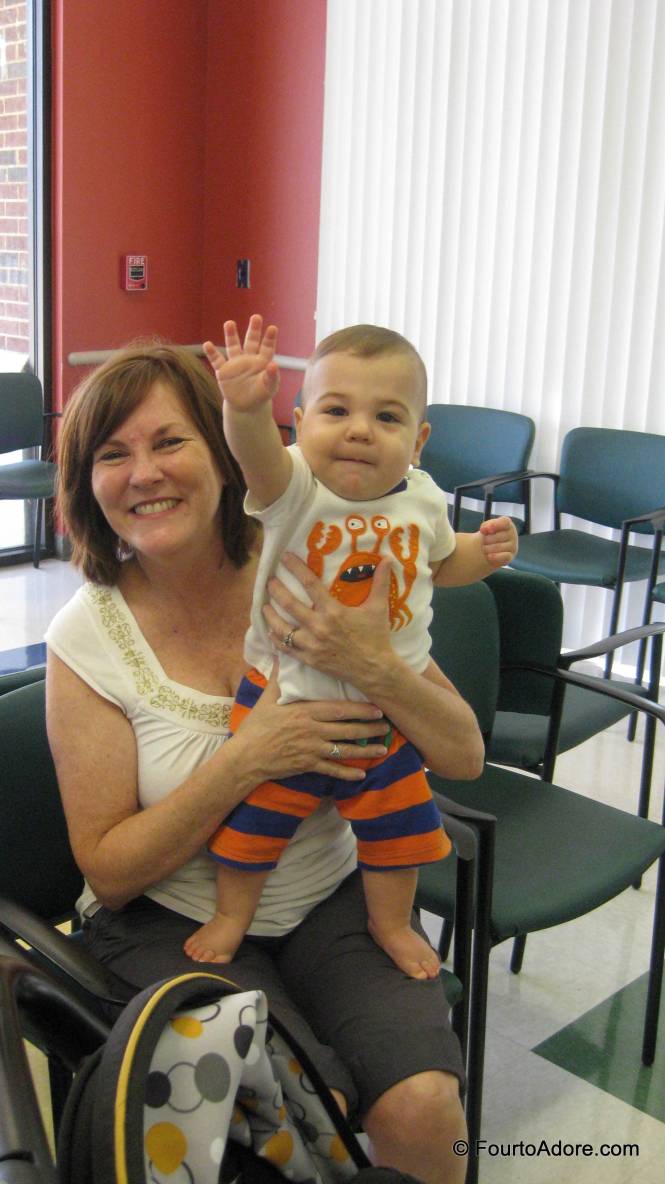 Knowing each baby had four shots in store, I begged Nisey to accompany us to the appointment.  I was even more happy she was there when we were stranded in the waiting room.

Mason won the keys to Christina’s heart the first day he met her. 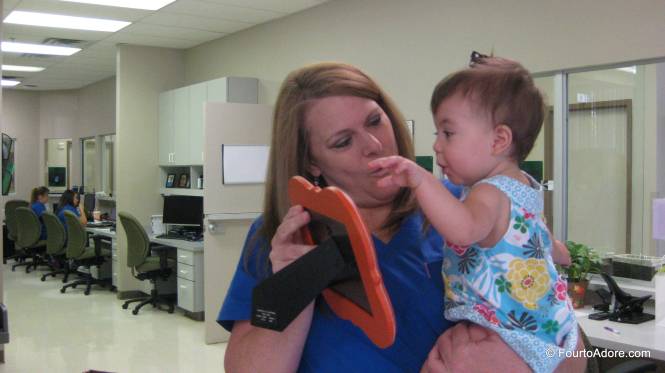 Rylin even made it behind the window with Susan.

Once we made it into an exam room, the rest of the appointment went off without a hitch, including 16 shots (the three of us took turns as baby consoler and the nurse was zippy).  The babies all showed fantastic growth and got a clean bill of health.  Since everyone is doing so well, Dr. Knapp said it was okay to wean them off formula and begin serving whole cow’s milk.   They’ve been successfully using Sippy cups with water for a while so now it’s just a matter of getting them to fully switch their beverage container AND the contents.  As of now, we are finishing off our final can of formula…ever.   While we will enjoy not spending a sizable portion of our budget on formula, mixing “the feed”, and washing a gazillion bottle parts, it is a bittersweet.  It marks a clear end of “babies” as we transition into toddlers.  At the same time, George and I happily anticipate more adventures and fond memories.

My favorite part of all well checks is looking at each baby’s growth.  They’ve come such a long way in just one year-

When I typed this up, I had to do a double take.  The babies have completely different body types and vary in weight, but three of them are the exact same height and Sydney is only a quarter of an inch shorter!