It’s mid-July and as much as I hate to admit it….back to school is just around the corner.  Swimsuits and  beach toys are being marked down while school supplies and uniforms are filling the shelves at Target and Walmart.  For many families it’ll be the first time sending kids off to kindergarten.  Last summer, that was us.  The kids were turning five in July and  were already registered for kindergarten.  I had done my best to prepare them for school, was familiar with research, and had 12 years of experience practicing school psychology in public schools.  They were going to kindergarten.  Yet, I questioned my once certain decision to send the kids to kindergarten at five instead of waiting another year.  Many people assumed with the summer birthday I’d hold the kids back.  I kept hearing friends, neighbors, and acquaintances on the internet saying they kept their summer birthday kids home until they were six.  I didn’t realize that there was such a debate about whether to send kids to kindergarten at five or six years old, but it is apparently a thing.  I began to wonder, “WHO sends a five year old to school?!?!” and started seriously questioning myself, and then worrying and maybe panicking a little.  It wasn’t good, ya’ll.

I worried that no matter how much we prepared, they’d be too little.  After all, they barely made it on the growth charts and still wore toddler sized clothes.  I worried that there wouldn’t be any other kids who were barely five in their class.  Most of all, I worried that they’d struggle and fail at life because I sent them to school at five instead of six.  Again, I thought, “WHO sends a five year old to school?!?!”  Nonetheless, I stood by my instinct and the kids started kindergarten in August.

They were itty bitty kindergarteners. See that red mark on Rylin’s red check? It was a huge mommy kiss.

A year later, I do not regret my decision.  Yes, the kids were small compared to their peers.  Some kids towered over them by at least five or six inches.  There were kids in their class that turned seven, but guess what?!?!  These six and seven year olds didn’t bully my babies or run circles around them academically.  They were simply older peers in the class.  Not such a big deal as I anticipated.  I was also pleasantly surprised at how many other young five kindergarteners were in the kids classes, and how many other petite kids were at school.  It was reassuring knowing mine weren’t the lone five year olds in kindergarten.

In the end, the kids learned how to function in a classroom, the school rules, respect of school staff,  navigate a large building, be independent, make friends, to read and write, count to 100, and so much more.  They finished kindergarten loving school and their teachers.  Of course they had rough patches, tears and failures, but that’s part of life isn’t it?  Kids have to experience the bitter taste of defeat to persevere and to one day become independent adults and good humans.  So, mamas of summer babies who will start kindergarten at five, I know it’s hard, but it will be okay!  You’ll both learn and grow so much this year.  Trust your gut, and have fun buying school supplies and clothes.   If you’re five year old is staying home another year, that’s okay too!  You do you.  🙂 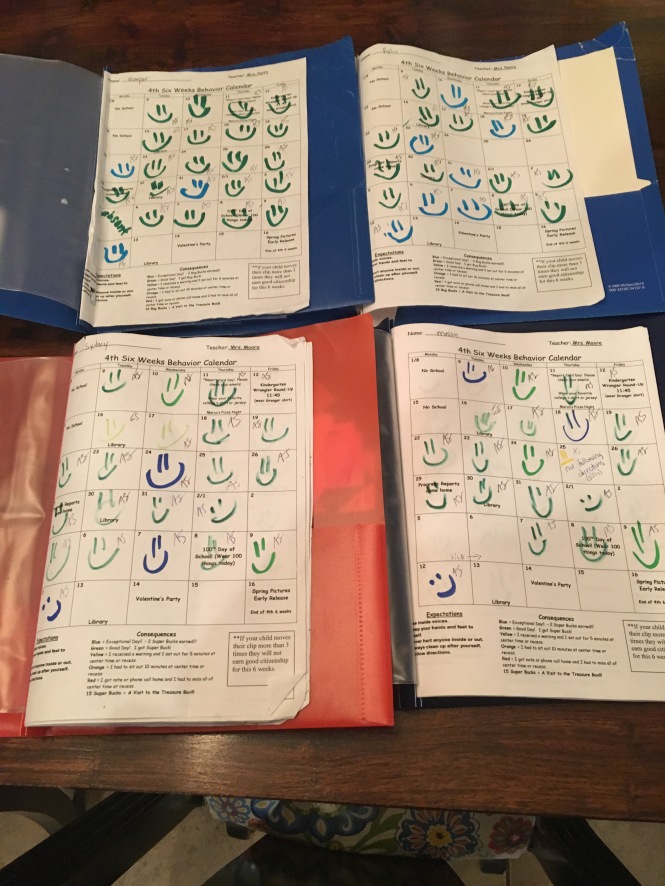 I’m most proud of the kids’ behavior at school.  I was concerned about a few of them before they started, but school staff was nothing but complimentary about them.  One day all four kids earned a “blue” meaning their behavior was exceptionally good!

P. S. Stay tuned for a list of our favorite school supplies.