Just when I thought spring was here to stay, Mother Nature threw a curve ball.  Once again, the temperature dropped about 30 degrees with drizzle, successfully holding us as hostages indoors.  ARGH!!!  To top it off, Mason and I both have an irritating cough.  Consequently, he’s extremely clingy, needy, and whiny today.   If I could, I’d snuggle him up and read or watch movies all day long.  Yet, the other three babies crave enrichment and attention.  I’m sorry, Mason, unfortunately it’s not a snuggle all day sort of day.

A few weeks ago, I stocked up on Target One Spot items, some for the quad’s Easter baskets, and some for rainy days like today.    After that particular haul, I attempted to execute a craft that I saw on Texas Tales that involved gluing pom poms onto Easter themed die cuts.  Similar aged quads managed it, I expected similar results.  It didn’t go as planned.  At all.  I dotted glue on the shapes and directed the babies to stick their pom poms.  They dutifully stuck their pom poms onto the glue.  It started out well.  Then they proceeded to remove the pom poms and smear the glue everywhere.  Or, in Harper’s case to attempts at eating the pom poms.  Feeling deflated, I scooped up all components of this activity and stuffed them into our craft box for another day.

Today it was time to revisit the pom poms, but not as the original craft.   Instead, I pulled out our old baby food making ice trays.   I gave each of the babies a tray and a handful of pom poms, directing them to put the pom poms into the squares.  For a good five to ten minutes, they stayed in their toddler chairs as they stuffed pom poms into the trays, emptied them and refilled them.  I was delighted at that and really didn’t expect it to last beyond that.

This is how our activity began, at the coffee table with toddler chairs.

Look closely and you’ll see how each of the quads approached this task in their own way. Some put one pom pom in each cube while others stuffed several into the same cube.

Amazingly, these pom poms continued to entertain the quads for a full HOUR!  Say what?  Naturally, they didn’t sit at the table for an hour, but they found an array of ways to play with the pom poms and enjoyed every minute of it.  I actually think they would have happily played longer, but nap time was fast approaching.  The $2 I spent on pom poms was by far the best investment I’ve made in a while.  They created a golden hour for us on an otherwise dreary day. 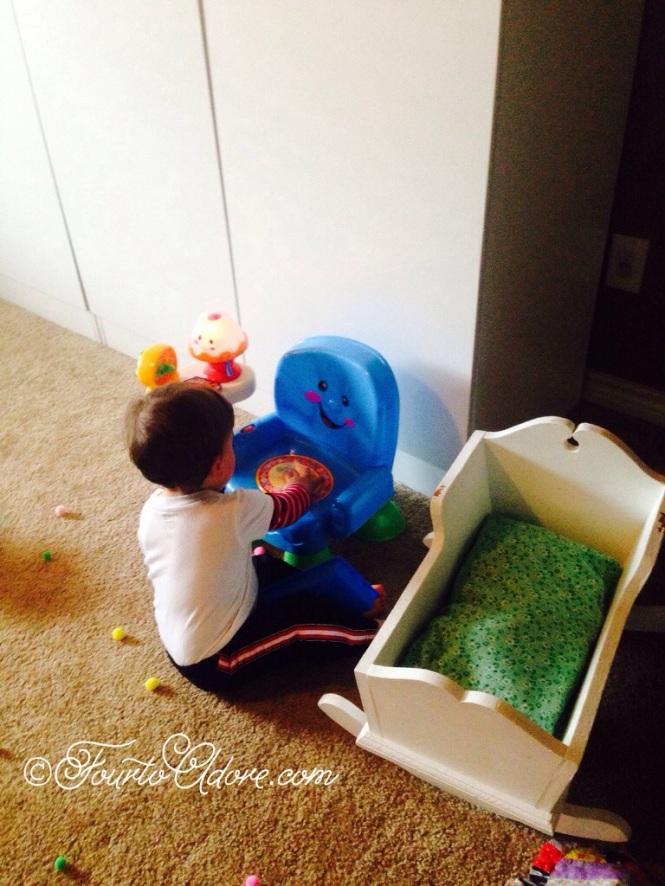 After they had enough table time, the quads found new ways to play with their pom poms. Harper stacked them onto a chair. 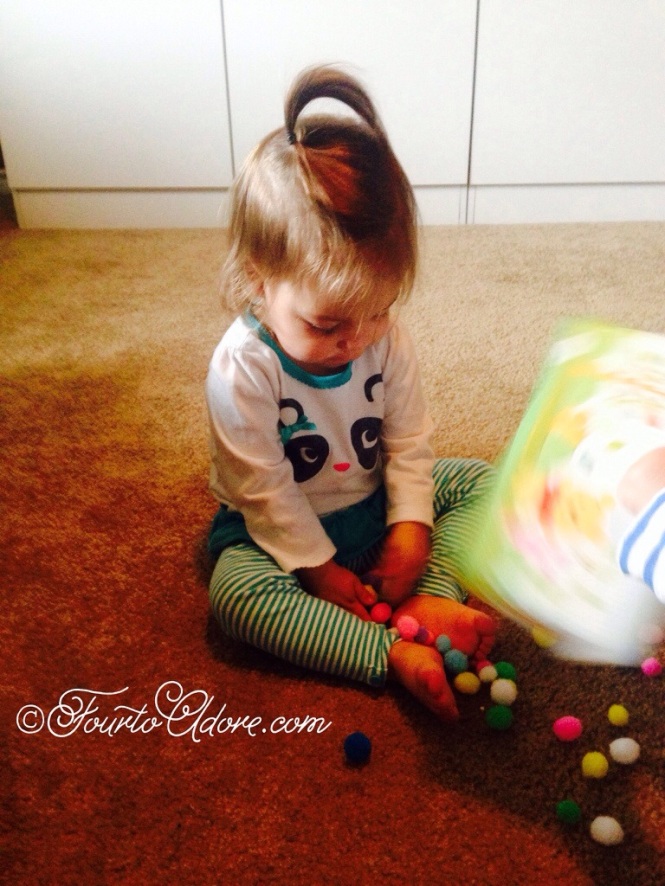 Sydney piled them on her feet and kicked in delight.

Rylin stuffed a baggie with them.

What’s your favorite One Spot find?

P. S. Pom poms are obviously choking hazards so this required some diligence on my part.  Surprisingly, Harper only tried to consume one pom pom and no one else even considered snacking on them.  A win in my book!