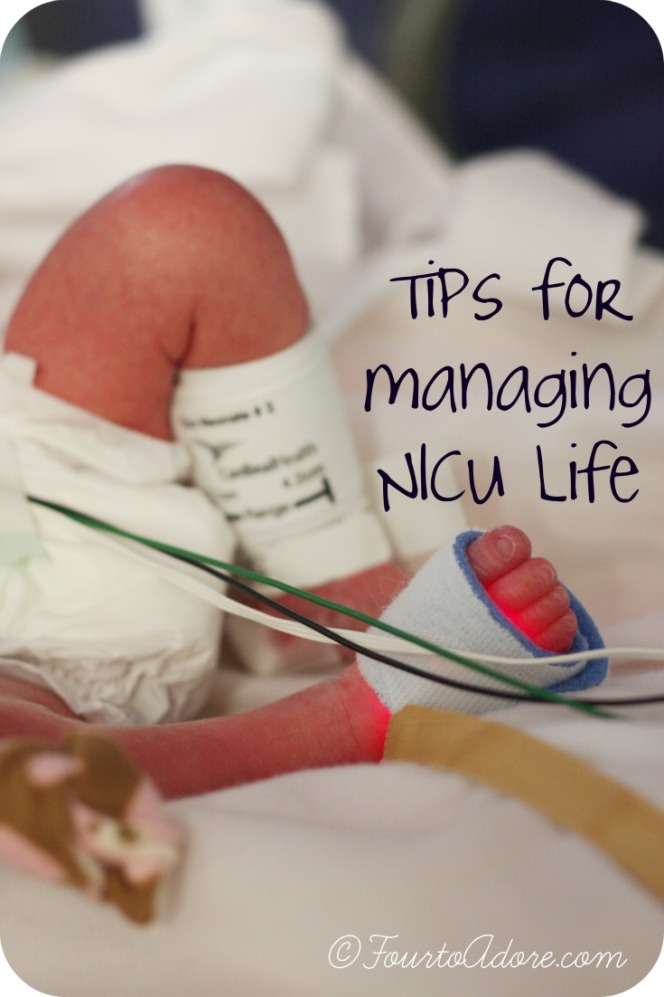 Over the past few weeks, we’ve returned to Cook Children’s where the babies resided the first seven weeks of their life. Thankfully, we’ve not returned as patients, but as visitors.  We returned to deliver a presentation, and also to visit a friend and her twins who are currently in the NICU.

Turning the corner to the NICU corridor back brought back a flood of emotions and memories.  I recalled fond memories of milestones being reached, but there were others I repressed.  Our experience in the NICU was a good one and we were pleased with our care.  Yet, it still was a NICU journey and there were many frightening, difficult moments. The twins are on the same floor where our babies stayed and it brought me back to a difficult place.  After reporting to the NICU for 49 days, there were quite a few things I learned along the way.  If I could rewind the clocks, here are the things I’d tell myself (and why). 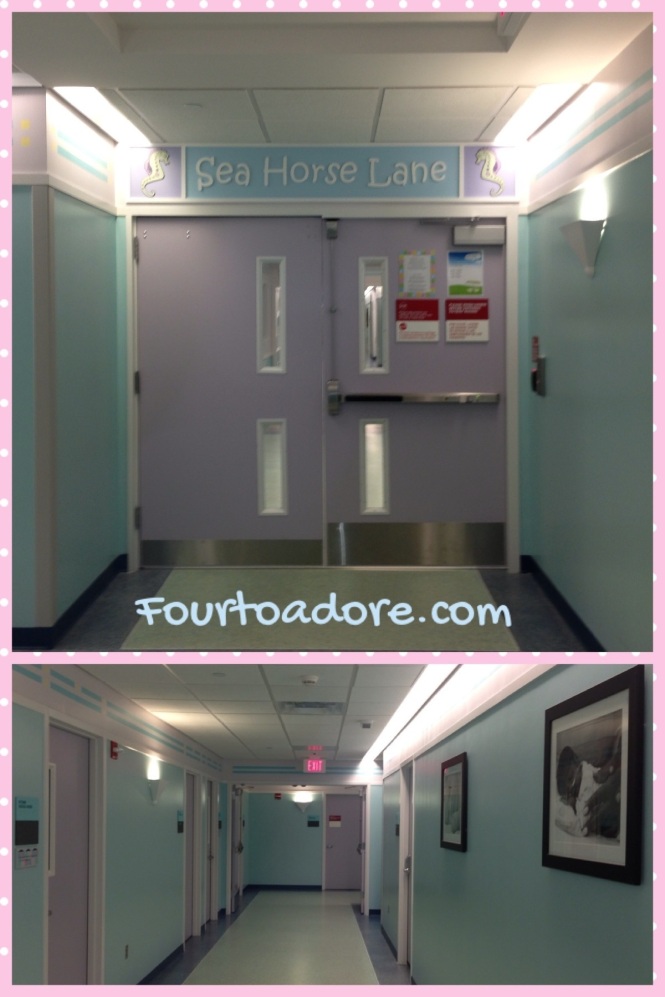 1. Become an active participant in your baby’s care ASAP

In the early days of NICU life, I remember feeling detached from the babies as we peered at them in their little boxes. I was terrified I’d contaminate them or break something, but honestly they needed our gentle touch. George reminded me several times that the wires were not life sustaining, but merely monitored the babies, and that gave me confidence to touch them.

I recall the nurses teaching me how to gently touch their fragile skin (stroking causes preemies pain). I gradually began spending increasing amounts of time just cradling them in my hands through isolette windows as I spoke to them, encouraging them to grow stronger. It wasn’t long before their IV’s were removed and we could finally hold our babies, which meant I could even do more. One of our nurses taught me how to do the “cares”, which involved swabbing their mouths out, changing diapers, checking body temperature, and moving their pulse ox (oxygen monitor) from one foot to the other every three hours. Being able to do those small things helped me bond with the babies, learn their unique qualities, and finally feel as if they were mine.

2. Don’t be afraid to ask questions

Being in a hospital in general, let alone the Neonatal Intensive Care Unit, can be intimidating.  With the quads, we found ourselves surrounded by numerous professionals who tossed technical jargon around as if we were medical school graduates.  Several weeks passed that I called the babies’ Pulse Ox (Oximeter) “Pole Socks”.  At first, I felt foolish forcing them to stop and explain things, but I learned how important it was.   As parents, it is important to know what is happening in your baby’s care and be a stakeholder, advocating for someone without a  voice.

We spent a few weeks in the NICU before I learned about “Primary Nurses”. These are nurses who agree to tend to particular patients every time they are on shift. Our primary nurses became imperative team members in the care of our babies. They knew each baby’s nuances, cheered for them, and fought for them (and me). When George went back to work, I spent many days in the NICU alone. I felt helpless, isolated and lonely some of the time. When our primary nurses were there, they not only helped our babies, but kept my spirits up and taught me a wealth of knowledge regarding how to care for a preemie. One nurse even helped make sure I got the Medela pump that worked best for me, even though it meant she had to retrieve and clean it every three hours.

It was vital that when we left our babies, we felt confident in their care takers and that those care takers respected us as parents. By spending my days at the NICU, the nurses and other hospital staff came to know me and in turn wanted our babies to thrive even more. When we were away, they took time to dress the babies to match their linens, make name plates for their cribs, and snapped pictures of things we missed. They did all that not only because they cared, but they knew we did too.

To show our appreciation, I occasionally brought our nurses warm cookies from the cafeteria or a Starbucks drink.

4. Take time for yourself, and your partner

At first, NICU life was somewhat novel and we were absorbing all sorts of knew information. A few weeks in, it got to be nearly too much for me to bear. I felt defeated and that we may never leave the NICU. I needed a break from my new routine of spending the entire day at the NICU only going home to shower and sleep. At that point, George and I enjoyed a few date nights, time with friends, and I did some shopping. I admittedly felt a tinge of guilt for leaving the babies alone when I could physically be there, but I needed breaks for mental health. One night, we even enjoyed a few cocktails and I did the whole “pump and dump” thing with my milk. While breast milk was like liquid gold I didn’t want to toss it, but I needed just an evening for me, even if that meant sacrificing a few ounces of milk.

I did not meet our social worker until weeks into our NICU stay and I wished I befriended her immediately.  She had knowledge about how to access resources and services we needed, such as how to apply for multiple birth programs.   Because I met her late in the game, Sydney did not receive benefits she was entitled to based on birth weight.

We were fortunate that our NICU had all private rooms with many amenities including a fold out sofa, television, and laundry facilities. In addition to those things, they provided things such as baby clothing, baby wash, and dish soap (for pump parts and bottles). However, over the course of our stay, I brought other creature comforts to help us feel as at home with the babies as possible. If our NICU nurses had not made name plates, I would have done that as well because it would personalize the space for us. I have a page devoted to items we kept at the NICU in case others would like to know.

As I mentioned, I spent the majority of my time in the NICU alone. The NICU is a place where emotions are high and being there alone can be intimidating. Fortunately, our NICU allowed four visitors per day (one per baby) and as best we could, we welcomed friends and family to come. Even if someone dropped by for just 30 minutes, that brightened my day. Because of our private rooms, I believe that visiting rules may have been more lax than at other places. If our NICU was more strict, I think I would have welcomed visitors to meet me at the hospital for lunch or coffee at the very least.

Despite welcoming visitors, we were strict regarding who could come visit. Before the babies were even born, we sent a memo to friends and family explaining the precautions we were taking to protect the babies’ health. These precautions were in place during our NICU stay and for the first 7 months the babies were at home. I believe that our efforts, while taxing, were worthwhile. After all, we did not have a sick visit to the doctor until after the babies’ first birthday. That is incredible considering the average baby battles eight colds in the first year!

We took plenty of pictures documenting the babies’ milestones while in the NICU- the first time we held each of them, first baths, and bottle feedings.  What we avoided, was documenting when they were fragile because I feared preserving those memories.  Now that we have been away from the NICU over a year, I would like to reflect upon the progress the babies made, but there is little proof.  I also took very few video clips, and the ones I have are primarily from when the babies were near discharge.  Seeing the twins in the NICU made me want to remember how our babies were once so tiny, but I have no video to review.

Fortunately, our NICU had an art therapist on staff who helped us create memories through art.  The babies painted a canvas with their foot prints and molds of their feet.  I am in awe each time I pass their first masterpiece hanging in the playroom.  If it weren’t for our art therapist, I may have missed out on creating art.  However, it would be simple to do even without a therapist, and I’d recommend doing it.

8. Find someone who can relate

I was fortunate to have a network of other moms of quadruplets to support me in the NICU journey and give advice and tips for dealing with the NICU.  However, that support was solely online.  With the help of a few thoughtful nurses,  I was fortunate enough to meet a mom of triplets born five days after the quads in our same NICU.  Meeting another mom in person who was right there dealing with the same things simultaneously was immensely helpful.  In fact, we continue to maintain communication, supporting each other along the way and we’ve held play dates!

When we returned to visit the twins, George and I took turns watching our own babies in the family play area of the hospital.  I think they too enjoyed being on the other side of things at the hospital. 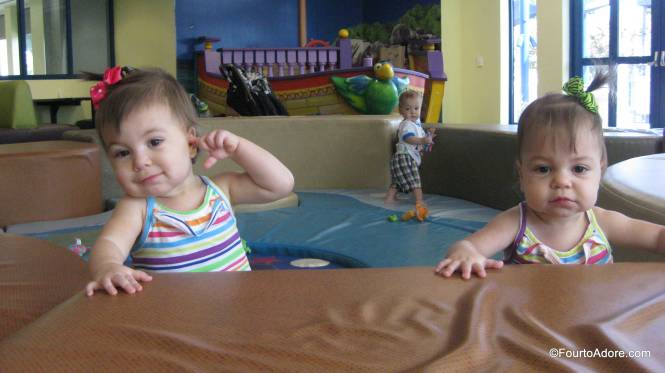 I only wish we had a space in our house large enough for a padded play area. 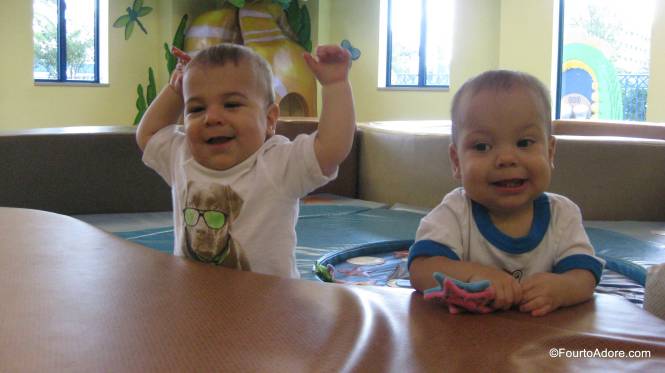 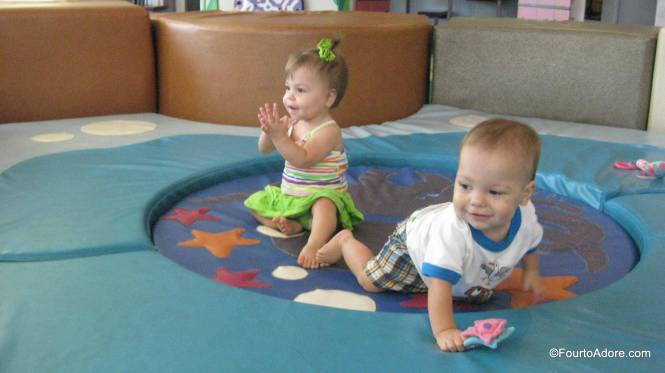 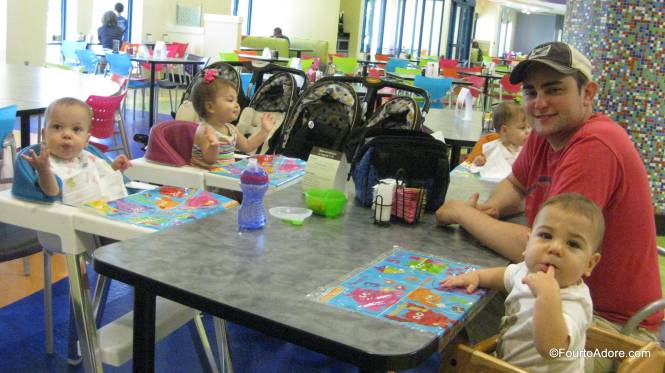 After the babies had a good romp in the play area, we retreated to the cafeteria for a brown bag dinner.

P.S. In reading the archives from when the babies were in the NICU, I made a great effort to stay positive.  Yet, I think I marginalized some of the things we endured, and consequently made it seem easy.  For parents currently dealing with a NICU stay, we encountered these things-