Today the babies are three weeks old so we have officially logged three weeks of NICU time. Our NICU is fantastic, but no matter how great the NICU is, the reality is that we still have four babies in the NICU. I am finding that being in the NICU is a bit taxing and I just want the babies to be big enough for home. (Obviously, I would be terrified to take them home right now as they are). I just have to keep in mind that just like bed rest, this will be a short time in the scheme of it all.

Since the babies are 33 weeks gestational age we started introducing bottles during feeding time. Up to this point, all of the babies have been fed via a tube every three hours. Before they are fed, “cares” are completed. This involves checking their body temperature, changing their diaper, moving their pulse ox to the other food, and oral care (swabbing their lips and mouth with a sponge dipped in peppermint water). If they cue (look alert, root, suck on a pacifier) during or right after cares, they are given a bottle to try. At this point, we don’t expect them to take the full bottle, but we want them to suck on it a few times and/ or at least hold the nipple in their mouth. While most people expect that eating is instinctual, it is not for preemies. They simply do not have the suck-swall0w-breath movements coordinated just yet. We closely monitor them while feeding to make sure they take a breath and don’t end up with a mouthful of milk they can’t swallow.

Early in our stay, nurses warned me that feeding was the most difficult part of the NICU and boy they were right! It is a slow and painful process. For the most part, Harper and Sydney do not cue (yet). They have few times, but not much. Mason has a few times, but Rylin has started to on a more consistent basis. When they have cued, Sydney, Harper and Mason have taken about 2-5 milliliters at a time. Rylin is figuring this out a little better and has taken up to 30 milliliters! That princess wants to learn how to eat. Whatever the babies don’t take in, goes into their gavage bag and they are tube fed the rest. Bottle feeding is literally exhausting to preemies so Harper, Sydney, and Mason have all gone on oxygen to help them a bit. I hated to see that tiny backslide, but really it is normal and not a huge deal. Nurses have told me that in the next few weeks it may click more for them. Let’s hope that is the case. In the meantime, I need prayers for patience and grace. I have to keep in mind that given their gestational age, the babies are really doing great.

Here are some pictures of events from the past week:

Harper jail broke to visit his siblings and got a little cuddle with Sydney. So sweet! 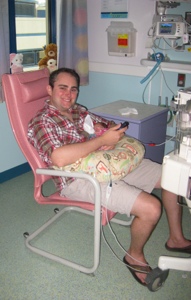 George figured out how to use the Boppy pillow to feed Rylin. She took the most from him on the first day.

Sydney and I gave bottle feeding a try. She took 3 ml that time. She may be tiny, but she tries just as hard as her brothers. 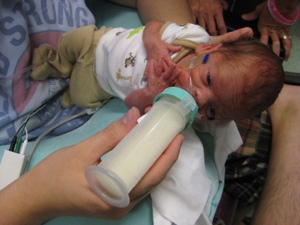 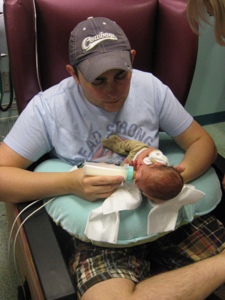 George got a chance to feed Mason too. Notice we have a different Boppy for him? We actually have FOUR Boppy pillows 🙂 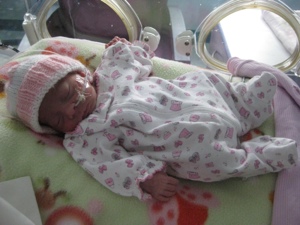 The nurses are so cute and love to dress the babies to match their sheets and sometimes each other. One day I found Rylin and Sydney dressed in matching pajamas. Notice how Rylin fills them out, but Sydney pulled her right arm and leg in and curled up since she had extra space.

Harper was the first to go on oxygen and soon after Sydney decided she wanted a puff too. Then, my breathing champ, Mason felt left out and also got some oxygen. At least they didn’t need to go back on CPAP. Oxygen is just delivered via a nasal cannula so we can still see their cute little faces. 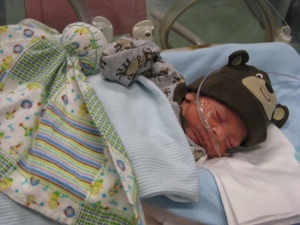