As usual, this week has been one of ups and downs. One of the downs was a disgusting 24 hour stomach virus that plagued me. I was literally holding Rylin feeling all cozy and comfy and 45 minutes later praying to the porcelain gods. I bolted out of the NICU faster than you could say, “Bob’s your uncle?”. I was terrified about contaminating the place. I was in so much pain not only from writhing in illness, but also being quarantined from my babies for two days. The babies have shown no signs of infection and we are praying they do not. We are also praying that George does not get this monstrosity of a bug. While it was just a 24 hour bug for me, illness like this would be a major set back for any of the babies. I figure I got the bug from the hospital so I am now a full on germ-a-phobe like Monk. Today, I started punching elevator buttons with my elbow and washing my hands until they are chaffing. On the bright side, I have now totally disinfected my house, caught up on some trashy daytime television, and lost a few pounds of baby weight. In case you were wondering…I do not recommend contracting a 24 hour stomach virus to lose lingering pregnancy pounds.

Here’s what happened with the babies:

This week Rylin has figured out the whole suck-swallow-breathe mechanics of bottle feeding! She cues at almost every feed so she gets to practice quite often. She has done so well in fact that there is talk of her coming home very soon! Since Rylin is likely coming home soon we decided it was time to try using the Avent bottles we already have. Most quad mamas say they had to use Dr. Brown’s preemie bottles, but I am trying very hard to boycott them (due to being a little costly, but mostly because they have a gazillion parts to clean!) Our NICU nurses told us they do not discharge babies with preemie nipples anyways and to give the Avent a try. Rylin has done fine so far so let’s hope her siblings can follow suit! Avent are much more cleaning friendly and we already have them!

Rylin snuggled up in her big girl crib with her lovey.

This week Harper was hanging out on his oxygen and content to gavage feed much of the time until he turned a new page (while I was sick, mind you). Two days ago he apparently figured out he was being beat by his sister. Thus, Harper kicked the oxygen and started to suck swallow breathe too. Harper is really showing off some cute little faces and his pretty bright eyes now that he is oxygen free. I also noticed that he has amazing eyelashes, which his sisters will really envy one day. He’s not quite as consistent with feeding, but Harper is very capable and is rumored to have a chance at coming home too.

Believe it or not, Harper eclipsed Rylin in weight and is now 5 lbs, 6 oz! I had to bring him some bigger footie pajamas today!

Harper all snugged up in his sleep sack.

Little brother, Mason, moved into his big boy crib this week and managed to snag a really cool blue one. However, once he moved from his isolette, Mason started being on the cool side. He was never too cold for intervention, but needed sleep sacks and lots of warm blankies to stay in the comfort zone. It was tricky keeping our set of four (two pink and two navy) sleep sacks clean. The nurses were given permission to dress Mason in the pink sleep sacks. After lots of contemplation, one of our primary nurses, Elizabeth, and I noticed that an air vent blew right into Mason’s crib. We tried lots of creative techniques to help from making a sort of tent over his crib to burrito bundling him. In a last stitch effort, George partially covered the vents with paper and tape while no one was looking. Once the vent was covered, Mason did an excellent job of staying warm! Unfortunately….someone noticed after a few days and the paper is now gone. So….Mason is a bit chilly again. More problem solving is in order! Mason started out mostly gavage feeding, but is also starting to suck swallow breathe rather well. He just tends to take a bit and then dozes off before finishing. He seems to need a bit more stamina, but I expect it is coming.

This guy is hanging out in the four pound club at 4 lbs, 9 oz. 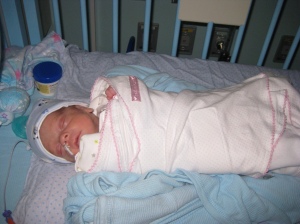 Our sweet nurses, Mindy and Elizabeth staged this picture of the foursome showing off their accomplishment.
The cheapie Vivitar camera we leave at the NICU doesn’t do the best job with pics, but you get the idea!

While I was sick, Rylin, Harper, and Mason all took more than one full bottle feed! Little stinkers showing off in my absence!

Our tiny little girl works overtime trying to keep up with her larger siblings and does a great job. Early in the week she moved into her big girl crib and got to try the bouncy seat! She kicked her oxygen before Harper by several days, but then decided she’d like it back. Sydney has a lot of desire to bottle feed and usually cues, but severe reflux has gotten in the way. She has suffered from nasal and chest congestion, which progressively worsened over the course of the week. Many interventions have been tried from nasal suctioning to adding cereal to her milk with no avail. Today, Sydney’s gavage tube was moved past her stomach to her intestines so milk cannot reflux. Her neonatoligist wants her to grow more and hopefully out of reflux before trying to bottle feed her. X rays were also done today to check the position of Sydney’s tube as well as her lungs. There was some haziness present, which may indicate pneumonia. Blood and urine cultures were taken to check for it and in the meantime she is being given IVs of antibiotics to help any infections.

I may need some prayers for patience too. 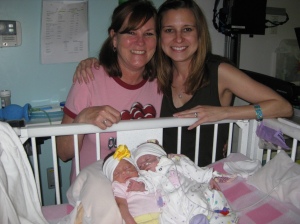 Rylin spent some sister time in Sydney’s crib so we snagged a three generational picture.

6 thoughts on “Keeping Up with the Foursome”