For about the past week and a half or two, Rylin has been the star eater and we’ve been told she might be coming home in the next week or two. Well, she is still eating well, but is not completely consistent with it. She takes many full bottles each day, but sometimes still leaves milk and on occasion needs some in her gavage tube(this is similar to an IV bag but instead of going into a vein it goes directly to a tube in the nose). Before she can come home she has to be gavage feed free for a while.

While Rylin has been working on getting to that point, her brothers started figuring it out. Harper learned the feeling of hunger pangs this week and really lets us know when it is mealtime. The downside to this is that he sometimes tires out from being so vocal and dozes off while eating. Falling asleep doesn’t always bring his feeding to a complete halt as he can sleepily eat too. Mason is also getting the hang of eating, but is sort of all or none. Many times he is completely asleep when it is time to eat while at other times he will guzzle a full bottle without problems. This means that whoever decides to consistently feed and not need a gavage will be the first one home. They are all at various stages of this so really it is anyone’s game.

Sydney is not to be forgotten in this whole feeding race. She had a huge setback this week with her reflux and mild pneumonia, but is improving. After a few days of IV antibiotics and being propped in a “Danny” sling she started to sound better, but still needed continuous gavage feeds to keep it under control. Two days ago, Sydney had a HUGE blow out diaper, which prompted a full clothing change and sponge bath. In the midst of it all, her transpiloric feeding tube slipped out, which put her in a precarious position. She was getting close to not needing it, but wasn’t there yet. After much talk and consideration, her doctor opted to leave it out and use a regular NG tube to her tummy. She still needs to take it easy with feeding so we don’t take steps back again, but is allowed to try a bottle feed twice a day if she is up to it. Despite all of her struggles, Sydney has tons of desire to feed. She is amazing with her pacifier and is the only one who can keep it in unassisted. Nurses like to call her “Baby Maggie” (as in Maggie Simpson). Go Sydney! 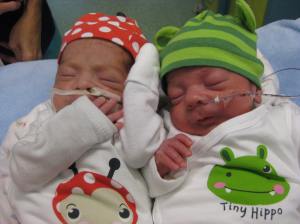 These adorable outfits were sent to us from a sweet blog reader that is in Germany. H & M of Germany knows how to make the perfect onsie, they snap up the side so they don’t go over the head! 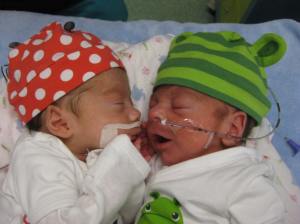 Rylin is whispering secrets to Harper. I asked them to please coordinate with each other about what order they would like to come home in.

Mason finally got to enjoy sitting in a bouncy seat and he loved it. We didn’t tell him Sydney’s pink blankies were still in it. 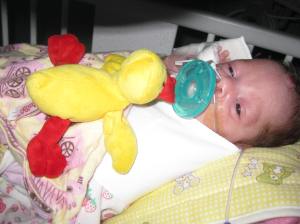 P.S. I started writing this blog post two days ago, but never got to finish it. Since that time, one of the babies really took off with feeds and will likely come home early in the week. Can you guess which one???