Despite our valiant efforts, the babies suffered their first cold this week.  Our visitors will be relieved to know it came from none other than Papa Bear himself.  That means Mama Bear’s wrath was directed towards him.   It started when George came home Friday night with a burning throat that quickly progressed into nasal congestion. By Monday night, Harper was fussier than usual and ate much less than usual.  Tuesday morning, his eyes were glassy and he was terribly congested.  Being a dutiful first time Mommy, I looked through all of my books to see what to do.  I was on track using saline with nasal suctioning, cool mist humidifier, sleeping upright, and cuddles.  The books all noted that I should go to the pediatrician for a first time cold to rule out anything else (e.g. RSV).  Knowing that we have four preemies, the letters R, S, and V together are very scary.  I was flying solo on Tuesday and wasn’t sure how to manage taking one baby to the pediatrician with three others in tow so I called our “Johnny on the Spot” aka Father in Law aka Grandaddy.  I probably called with a tinge of distress hoping he could help manage the four at the doctor’s office if needed.  Without hesitation, he said, “I’m coming over!”.

Meanwhile, I called the pediatrician and the nurse assured me that I was doing everything I should.  Thankfully, there was no reason to take Harper in for an appointment unless there was fever or dehydration.  Even without having to go to the doctor, I still had one sick baby and three others to contend with.  Remember that arcade game where moles pop up from a box and you whack them down with a mallet?  Just as you take care of one, three more pop up in the first one’s place.  That was Tuesday for me, a game of Whack a Mole.  I was doing my best to prevent cold pandemic with quads by sterilizing bottles, washing hands over and over, disinfecting all surfaces, and separating all baby stuff.  I would get finished feeding the fourth baby as the first began refluxing.  Once I finished taking care of reflux, another one would be wailing of a stinky diaper.  All the while, Harper still fussed of total discomfort.  Amen for Grandaddy!  While he doesn’t generally do diapers or spit ups, it was nice having him there to help console fussy babies and manage the feeding frenzies.   He was so sweet that he stayed with us until George came home late in the evening even though I told him he didn’t have to stay.  By the end of the day I’m pretty sure his batteries were totally drained.  Keeping up with four babies one of which is sick is not for the faint of heart.

You may recall…I worked hard to keep the cold pandemic at bay?  You probably predicted, those efforts were absolutely futile.  Each day this week another baby fell victim to the cold.  Harper then Mason, Rylin and finally Sydney.  As of now, we have four stuffy nosed babies with little appetite and a predisposition to reflux.  I probably shall run, I think I need to whack a mole!

I decided I needed to snuggle all four at once.

My idea worked!  Here they are from my point of view. 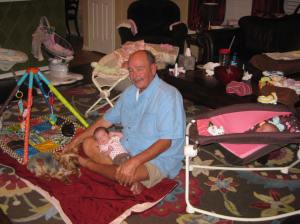 Grandaddy consoling a fussy Rylin. Notice there are several Rock ‘n’ Plays? We now have four because everyone needs to sleep upright with all the mucus and reflux we have going on.

Here is my first attempt with bottle propping to feed all at once using props from a triplet Grandpa. Epic fail. The props work like a bib so if a burp or reflux is coming on it’s bad news bears!

Attempt #2 at bottle propping just using towels. This worked for a moment, but we didn’t have much stability. We also tried bottle buddies suggested by another quad mama, but didn’t have much luck yet. We may try again when the babies are tad bigger.

Here’s what it looks like when everyone is wearing their angry eyes.

In honor of the Red River Rivalry we wore our Texas socks for the Texas/ OU game. Too bad our lucky socks didn’t help Texas a bit.