While I was on bedrest I managed to devour every baby magazine I could get my grubby paws on and poured over several pregnancy books.  But do you think I read much about baby routines?  Of course not!  I read a dry book about basic (well duh! type) baby care, but not much about routines and schedules for the day.  As a school psychologist I know a good deal about elementary aged children and I know that routines are key, but I am no baby expert.

When everyone trickled home, we kept them on the NICU schedule of feeding every three hours at 12 am, 3 am, 6 am, 9 am, 12 pm, 3 pm, and 6 pm, and 9 pm so we had eight feeds per day.  This was totally exhausting!  After feeds during the day, we kept them in the living room in various contraptions that propped them up to prevent reflux and/ or lulled them to sleep.  At night, we’d put them all in their beds with SIDS monitors and the baby monitor on so we could keep tabs on everyone.  While this worked for our tiny preemies, they began to outgrow this routine rather quickly.  One night we woke up at about 3 am and panicked when we realized we didn’t feed anyone at midnight.  We successfully dropped the midnight feed.  This was great!

As the babies grew, they started going closer to four hour feeds in the daytime, which was nice.  However, I soon figured out that if they went four hours all day long, they never went more than four hours at night.  Now this mama wanted more than three hours of consecutive sleep at night, so  intervention was in order.  I vaguely remembered an email sent to me before delivery from a fellow quad mama about how to get them to sleep through the night using Babywise.  I pulled it up for reference and realized that we 1. needed to keep them on a three hour feed schedule in the day to keep them sustained through the night 2. needed to turn our baby monitors off.  Say what?  Turn the baby monitor off???  We did!  The thing is baby monitors pick up EVERY little movement and grunt all night long.  I would find myself stumbling out of bed at 4:00-5:00 am to feed one baby that was grunting and waking three sleeping babies up to keep them on the same schedule.  Also, when we turned the monitors off, we realized we CAN hear when they cry and if a SIDS monitor alarms.  Even with implementing these things, we continued to wake every morning at 5:00 am and this just wasn’t working.  So, I picked up a copy of Babywise at Half Price Books to learn the whole program for myself.

I read it cover to cover last Tuesday and began full implementation on Thursday.  I quickly realized that Harper’s circadian rhythm was “stuck” to wake at about 5:00 am and he wasn’t really hungry.  When he’d wake up, bleary eyed me would heat four bottles and wake the other three to feed.  I knew that if he could sleep until 5:00 am, that 6:00 wasn’t too lofty of a goal.  So, I set the expectation to feed starting at 6:00 or later.  After three days of convincing Harper to go back to sleep, he finally agreed.  I am proud to say all four have slept from 11 pm to 7:30 am!  I don’t mean we fed them at 11 either, they SLEPT from 11 pm to 7:30 am.  That is a FULL night’s sleep for us!
We have a few other kinks of Babywise to work out, but sleeping a full night is absolute

ly fantastic.  The Babywise theory is that babies have a cycle of feed-wake-sleep and they move through these cycles in that order all day long.  Also, babies must sleep in their cribs in their rooms anytime they go into sleep cycles, not contraptions.  (We still rely upon the Rock ‘n’ Plays for sleep because they keep the babies upright helping prevent reflux spells.)  This teaches them to fall asleep independently.   If they get these cycles out of order, things get disrupted for them.  Right now we are struggling to keep them awake for the entire feed and to stay awake before a nap.  They tend to fall asleep too soon and wake long before it is time to feed.   Right now, Rylin is particularly upset with the new routine.  She prefers to eat in her sleep and during “playtime” then wakes up like a banshee about an hour before the next feed.   I am sticking with it in hopes that we will teach the babies where and how to sleep so everyone is more rested.  Here’s to wisin’ up!

Cue the pictures of sleeping babies- 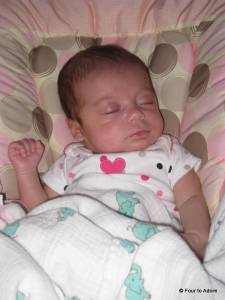 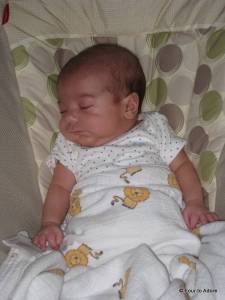 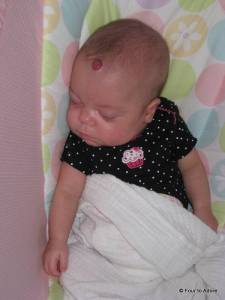 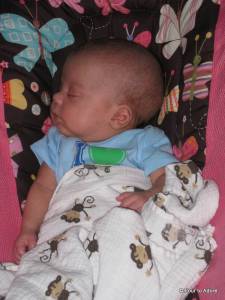 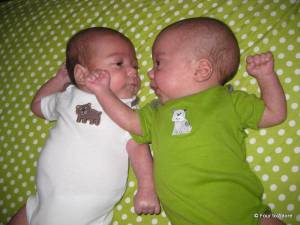 Maybe Harper and Mason can keep each other awake.

Sydney is awake this round!

And we lost another one to tummy time fatigue…