On a whim, George and I decided to create a fundraising team for the March of Dimes, and actually take all four babies to participate. This was a major feat for us. First of all, we just came off lock down at the beginning of the month so we are still germ-fearing and highly protective of our brood. Plus, we are extremely rigid with our schedule, and the walk was scheduled to occur during the morning nap. Despite all of our reservations, we knew the March of Dimes was a cause close to our hearts and worthy of true support: walking the walk. Since very little prior planning was involved, we knew there was a real possibility it would be the two of us waking four babies too early and hauling them into a mass of people. Fortunately, my sister graciously met at our house to help get the babies ready and to join us. George’s aunt and youngest cousin, Brandi also met us to walk the walk.

I haven’t the foggiest idea why the parking lot for the walk was behind locked gates, but it made reaching the starting line dicey for us.. We had to scrounge up some muscle to hoist four babies in the Runabout over it. 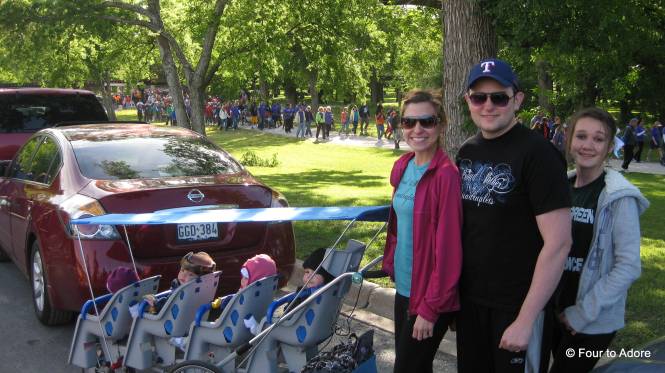 If you look behind us, there is a glimpse of the crowd marching by.

Being rookies to the March of Dimes, George and I didn’t know what to expect or how to prepare. I am horrible at estimating distances and numbers so there could have been 1,000 walkers or 100,000. Regardless of the actual number, I can say there were people as far as the eye could see and the entire trail was packed. By far this is the most public event we’ve attended with the babies. The path was gridlocked with families and friends marching for a united cause, and it was moving to say the least. We enjoyed seeing all the team t-shirts and learning about the stories behind them. Our hearts were touched by several families walking for preemies much smaller than even Sydney (she was 2 lbs, 6 oz) and in remembrance of the tiniest of family members. It was a solemn reminder never to take our babies’ health for granted and to always remember the medical staff who helped us along the journey. We have a team of perinatologists who helped us keep the babies healthy prior to delivery and then an entire NICU staff who cared for our fragile preemies.

Most of the walk, the crowd trudged along at a snails’ pace, which did not make for happy babies. Several times we went off the trail so we could run instead. Our babies enjoy a grueling pace! George and I realized we aren’t in the best of shape anymore…we were rather winded.

I’m not sure if Mason was fed up with his sister badgering him or if he was just totally tuckered out.

Even in a large crowd of thousands, a quad stroller is not the most conspicuous. Needless to say, we attracted a great deal of attention. As far as comments and questions, we heard nothing but niceties. Many people shared the notion we believe to be true: “you are blessed!” I beamed each time a passerby told us that and I always will. I don’t recall any rude commentary. However, the paparazzi was in full force. George and I are becoming accustomed to questions and photo requests. The paparazzi is different. They don’t bother to ask questions or dole out compliments. They gawk and snap pictures from their iphones then paste them up on their social networks. I presume I shall eventually get used to that sort of thing, but it made me feel totally violated. After all, I have no idea what happened to pictures snapped of us after the fact. I’m not sure I’ve ever intentionally taken a photo of a stranger without their knowledge or consent, but I will think twice about it if I ever get a notion to do so. That bit of drama aside, we had a great walk together as a family and plan to keep the tradition alive. Next year, we would like to coordinate better and rally a team to join us in the walk. We even brainstormed about creating team t-shirts in the same shade of blue as our stroller. 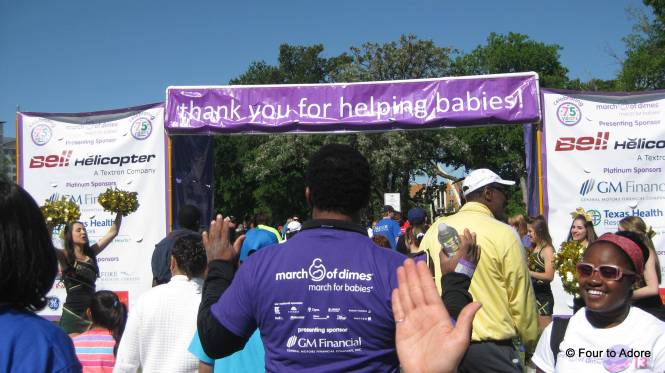 Ta da! We made it through the finish line with four babies in tow!

As we crossed the finish line, each baby received a sticker like this one. We slapped them on the backs of their onsies since they’d eat them otherwise.

The finish line was far too crowded for a photo-op so we settled for the March of Dimes Bell Helicopter. 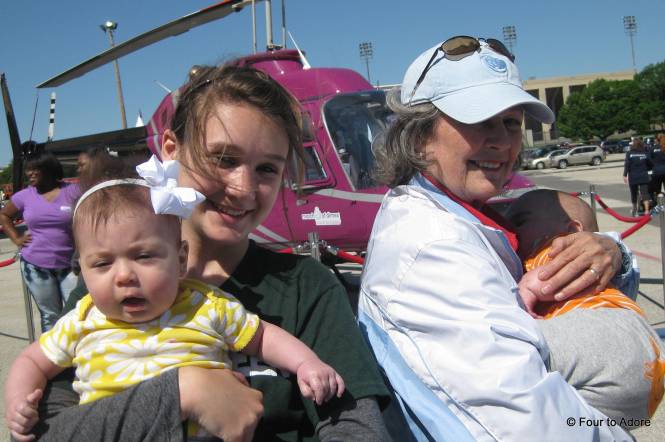 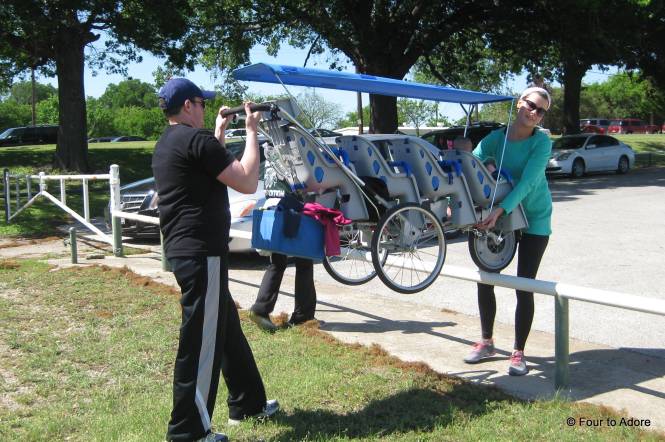 By the end of the march, we had to bail three babies from the stroller. Only Sydney remained, contently chattering about the event. With only Sydney in the stroller, Courtney was able to help George lift the Runabout over the railing to the van. 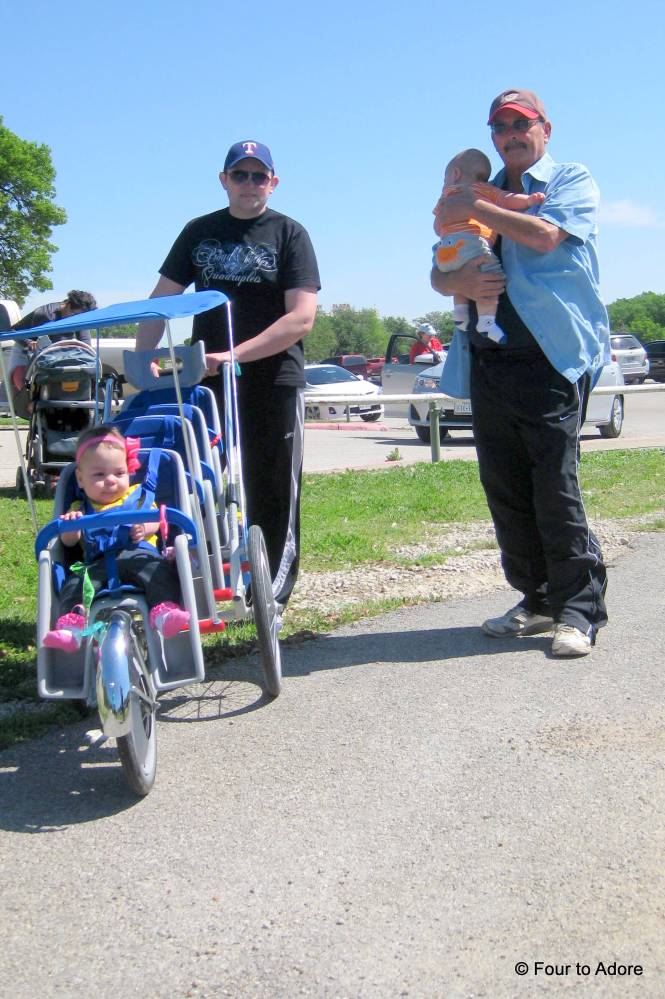 Grandaddy opted out of the walk, but patiently waited for us at the end and dutifully helped load fussing babies into the van. 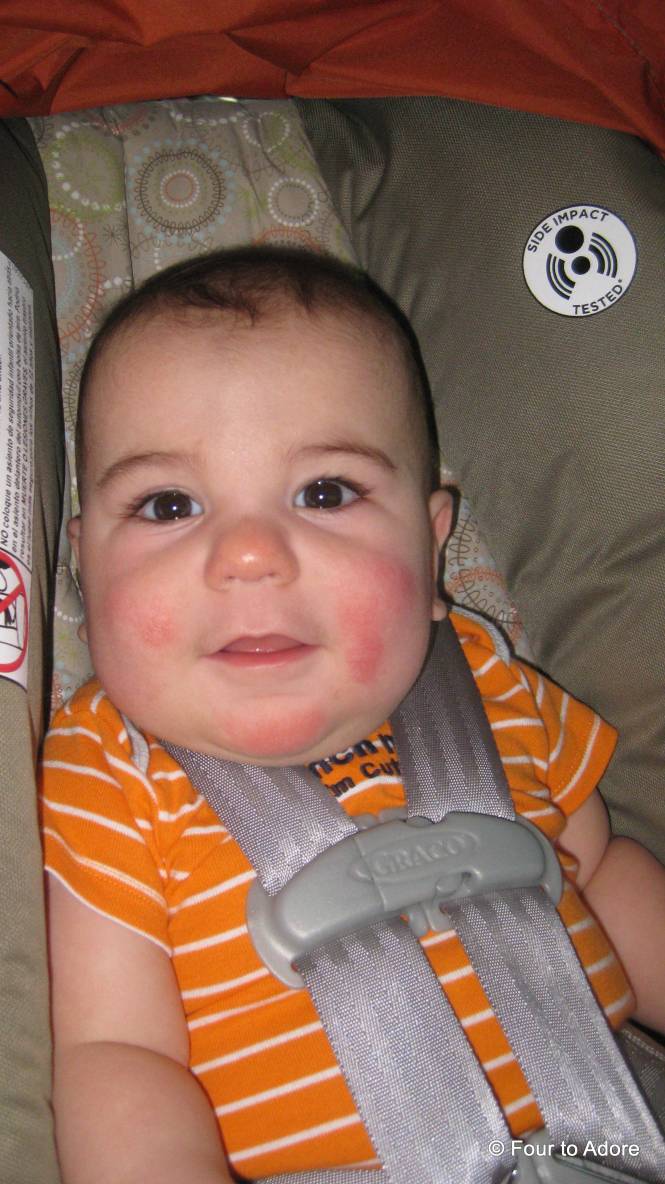 Since Courtney joined us for the walk, I let her sit shotgun while I shimmied between the boys in the back of the van. I realized they’ve been fooling me into thinking they nap in the van. Turns out they are quiet, but look like this!

The girls didn’t conk out either. ..Sitting in the back of the van I saw eight little eyes staring back at me!

What causes are close to your heart?

We would like to extend a special thanks to the following people who donated in honor of our team:

8 thoughts on “The Ants Go Marching…”