On Good Friday, our friends, Kristin & JW tied the knot, and we had the honor of participating in their special day.  George officiated the wedding and the quads served as ring bearers and flower girls.

Several months ago when Kristin & JW asked us to be part of their wedding day, we gladly and confidently accepted.  As the big day approached, I think George and I both became a bit nervous about committing.  In fact, when we attended another wedding in September, George observed the ceremony and hesitantly proclaimed, “I can do this!”  At that point, I made it clear that our friends were counting on him and if he didn’t feel confident in his ability to officiate he’d better let them know right away.  However, when George puts his mind to something he perseveres and he was going to deliver.   For the past few months, George conferred with a pastor about officiating and began practicing.  In time, his confidence grew.

In the meantime, the quads wedding day threads arrived.  When I pulled them out of the boxes, Rylin squealed in delight at her wardrobe.  Once I put it on her she began twirling and swaying as if the den was a ballroom.  Sydney, on the other hand, had a different perspective.  As I pulled her petti romper up, she instantly squealed in disdain and stripped it from her body.  I knew it was problematic. Feeling deflated, I put Sydney’s outfit back on the hanger and put it away to try later.  While Sydney seemed to loathe the frilly little number, it was a battle getting it off of Rylin for bedtime.  She would have worn the flower girl garb to sleep if I’d let her.

About a week later, I tried the petti romper on Sydney again and got the same reaction, but this time she was more passionate about her disapproval. She stamped her feet and waved a finger at me as she told me “No, Mommy.  No!!!!”  Knowing that Sydney tends to be sensitive to textures and clothing, I ran my hands on the inside of her outfit and agreed it was slightly itchy.  At this point, I consulted Sydney’s occupational therapist for advice.  She suggested that I hang the outfit in the girl’s room so Sydney could explore it daily, put a compression garment underneath, do a brushing technique to Sydney’s skin, and let her use a pacifier while wearing it.  I managed to find a nude colored leotard at a local dance studio to put underneath, but Sydney still told me she itched.  I followed the other advice and Sydney tolerated the dress for up to 20 minutes at a time.  I knew that wouldn’t be long enough for an entire wedding and reception, but hoped she’d wear it for the ceremony.  Just in case, I picked up a back up dress in the same color as the original frock.

Wardrobe aside, we had another challenge: to get four two year olds to walk down the aisle each carrying a sign.  I assumed they’d willingly do this for the rehearsal, but wasn’t sure how they’d manage with 300 people staring at them.  In preparation for this, I offered up some positive reinforcement (individual Pez dispensers) if they did their job as asked. I knew photographers liked using Pez with children since it doesn’t stain faces, and I thought it would take them time to empty the dispensers during the ceremony.  We talked about this reward all week long, and these kids were thrilled about it.

Prior to the ceremony, both boys happily suited up in their khaki pants, white dress shirts, pink bow ties, suspenders, and boat shoes.  They were dapper little guys no doubt!  Rylin happily put her outfit on and danced about the room.  Sydney was adamant she was not getting dressed.  In fact, she intended on wearing only diaper.  GAH!!!!

The bride and the mother of the bride told me numerous times Sydney didn’t have to be in the wedding, and I wasn’t planning to force her.  However, I was not about to take a screaming child clad in only a diaper to a wedding ceremony.  I knew she needed to be calm and wearing something, even if it was the back up dress.  At this point, we turned on a cartoon and as Sydney became captivated, I quietly slipped her petti romper on.   When she noticed she protested a bit, but was far more interested in the television than what I was doing.  It wasn’t long before I had her fully dressed and hair done.  It was as if a load was lifted from my shoulders!  We had a wardrobe victory.

Being a little ladies man, Mason snatched a kiss from the bride before the wedding.

With the pressure of having all four kids and the husband in the wedding, I enlisted the help of Nisey and Terri to manage the little people. 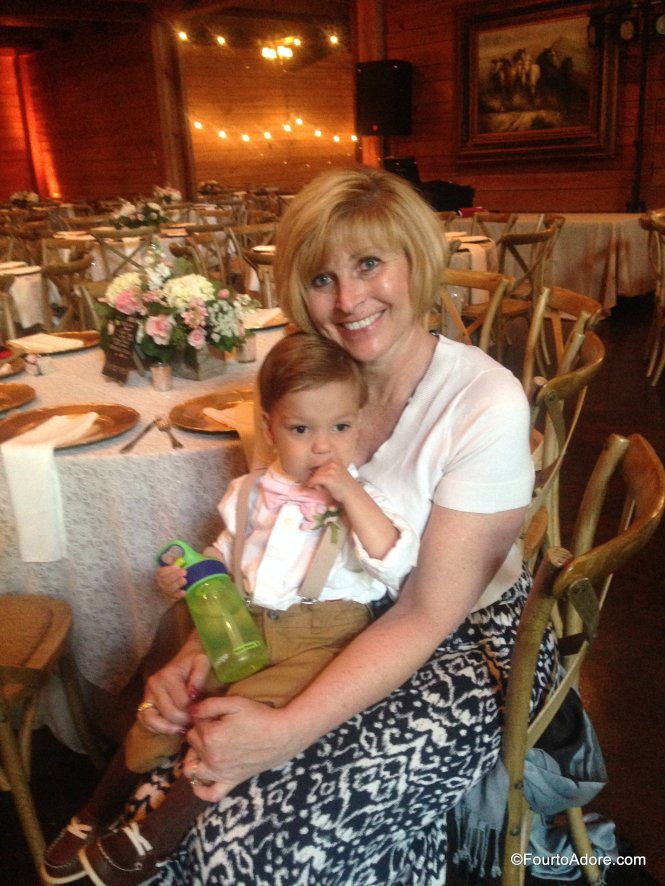 Nisey and I left the quads in the care of the bridesmaids and Terri while we made our way to the front of the congregation with Pez in hand. 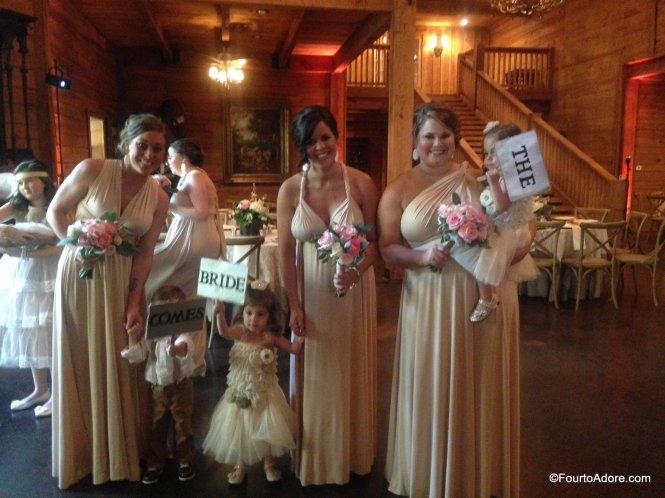 As music began to play, I crossed my fingers everyone was cooperative.  When I spied Harper walking down the aisle with his “Here” sign in hand I felt confident about the others.  Oftentimes it only takes one to take the lead and the others will follow. 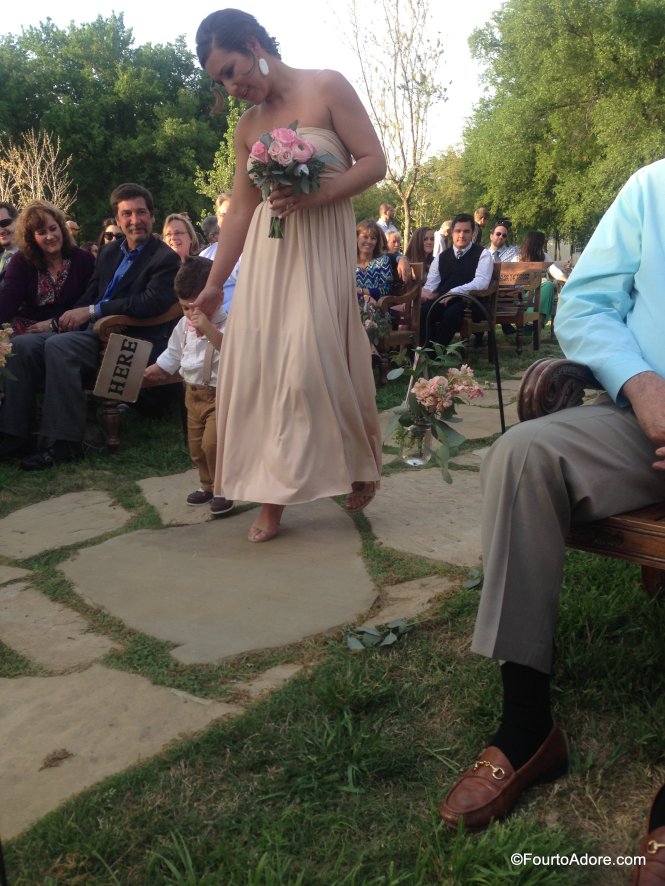 Sydney refused to walk, but was okay to be carried.  Thankfully, Nikki is a rock star who obliged. 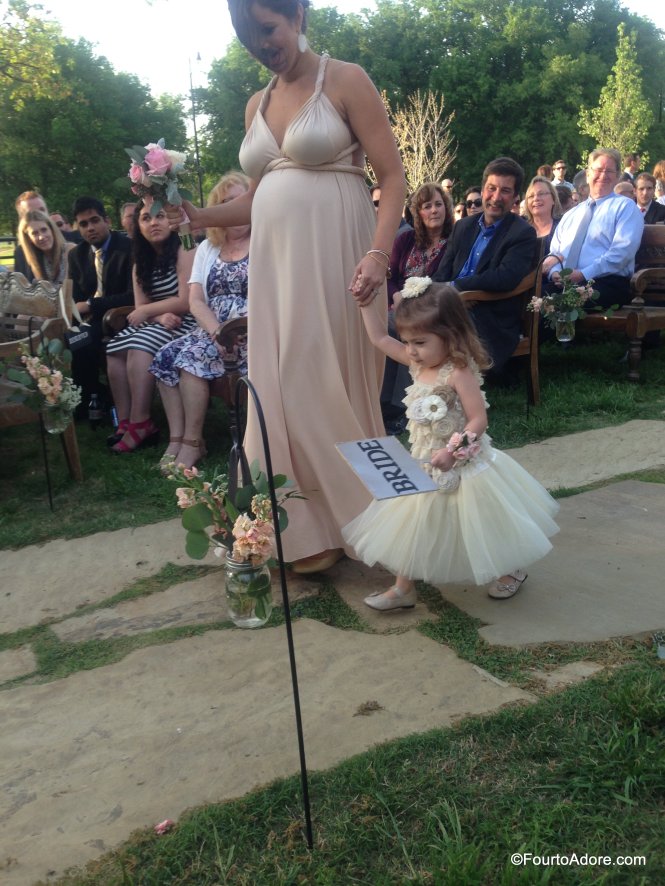 Once all four kiddos were in my clutches, my nerves eased.  However, George still had a ceremony to perform and I had four kids to supervise.  Much to my dismay, they quads devoured every single row of Pez within a couple of minutes.  It would have been okay except that they started chattering LOUDLY.  They weren’t trying to be disruptive, but have no clue how to whisper.  I knew the people sitting nearby would be disturbed so Nisey and I ushered all four out of their seats to the outskirts of the congregation.  There, Rylin and Mason cut loose and began running with joy. 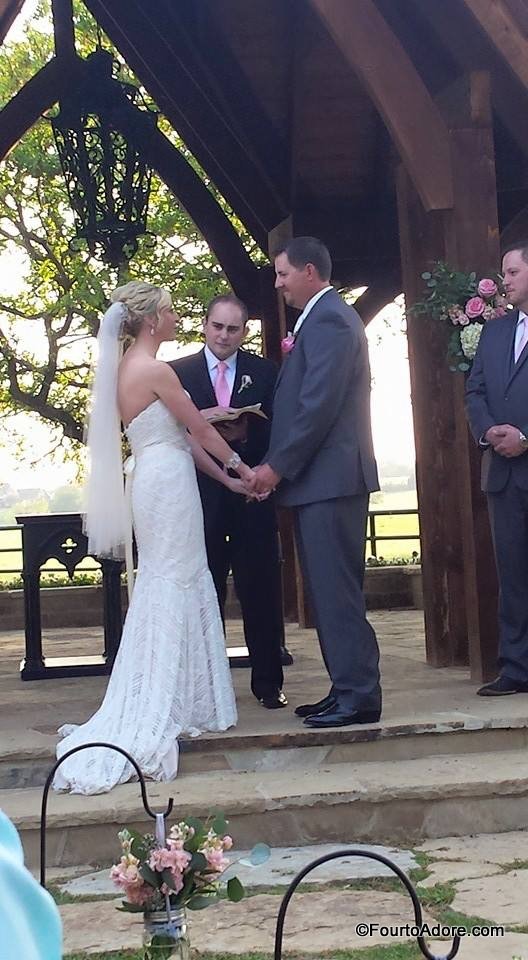 Thankfully, it was an outside venue so running around didn’t really cause a ruckus.  Once the ceremony ended it was time for post wedding pictures. 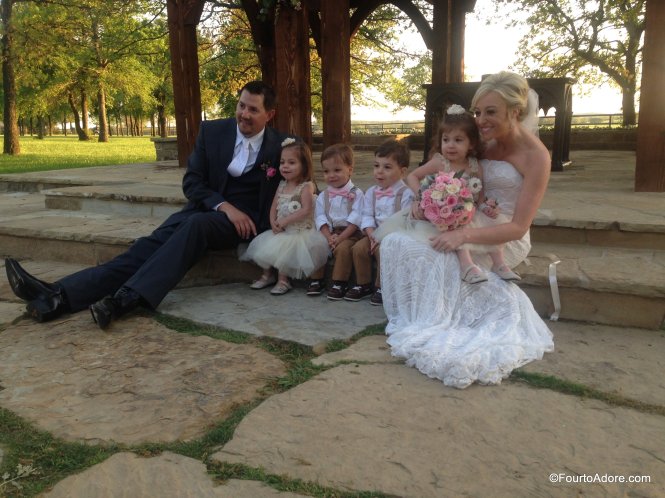 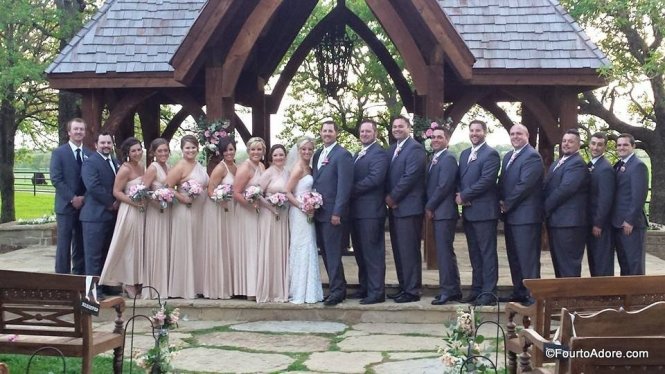 Sydney held it together all she could and was not happy when I requested a family picture.

At the reception, the quads took charge of the dance floor and had fun in the photo booth.

Looking back at the day, I am so proud of my family.  George received many compliments about the ceremony, and I think he delivered just what the couple wanted.  The quads managed to stay clothed the entire time, went down the aisle, and carried their signs as asked.  I am grateful for all of the help we had to make those things happen too.  Most of all, congratulations, Kristin & JW…we love you!

10 thoughts on “Here Comes the Bride”