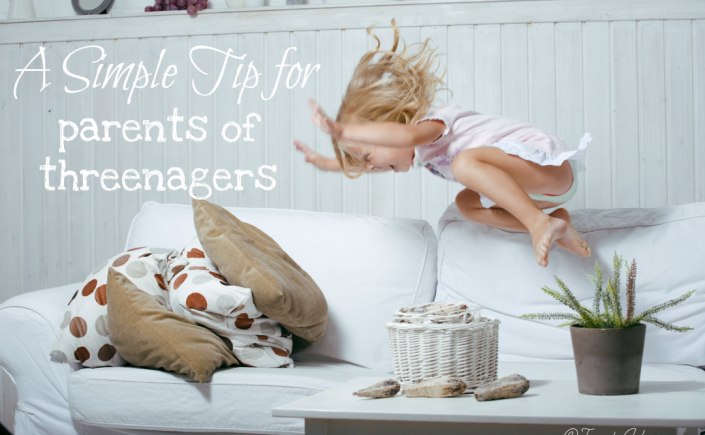 Whoever coined the phrase “terrible twos” must have done so before they were the parent of a three-year old.

Because if the twos are “terrible,” then the “threes” are a nightmare in living color.

At least that was the case in our home, with all three of our children. I hear so many other parents share the same discovery upon the arrival of their first child’s third birthday.

Yes, I think the “terrible twos” are an urban legend.

Because when they’re two, it’s all, “Yes mommy,”

And, “What can I do to please you today mommy?”

And then they turn three, and it’s “No.”

And “I don’t love you anymore.”

And “You’re the worst mommy ever!”

And it’s temper tantrums in the aisles of the grocery store.

And battle time at the dinner table.

(Don’t even get me started on that one.)

I don’t know what happens on the 1,094th day of their sweet little lives, but whatever it is, it’s not good.

It’s as if there’s a switch on their backs. And on the eve of their third birthday, someone dressed for the cover of darkness, and wearing a mask, sneaks into our home while all the chicks are tucked safely into bed, and flips the switch from “angel” to … well, the opposite of that.

And the next day, our whole life changes.

I remember vividly when my husband, Kory, and I discovered that our sweet little angel of a first-born had made that transition. It revealed itself in a battle of the wills that centered around swallowing food.

We wanted her to.

For hours at a time, she would hold her food in between her cheeks and her gums.

What in the world?

Were we raising a child or a chipmunk?

It happened day after day, for weeks on end.

And it got so out of hand that we were having to wrestle her to the ground before bedtime to sweep her mouth of whatever food she was storing up for winter so she wouldn’t choke to death in her sleep.

That control battle dominated the scene for weeks and tainted every other interaction we had with our daughter because we were frustrated and exhausted.

I remember one day in particular.

I was pregnant with our first-born son.

And it was dinner time.

It had been a long day, and our daughter had been preparing for hibernation and telling me “no” for most of it. She also wouldn’t put her pee pee in the potty, so I’d cleaned up at least 10 messes on the floor when I could barely reach my toes.

I made her favorite meal for dinner, which she informed me she no longer liked. But with some coaxing, I got her to eat. (Well, I guess that’s what you call it when someone chews up their food and stores it between their cheeks and their gums.)

She had a mouthful of food that she wouldn’t swallow, and it was time for bed.

I was too tired to fight her, so I ignored it, and I took her upstairs for bath, hoping she would swallow her food on her own. But one bath, one story, and one prayer later, the food was still in her mouth. So the time had come when I was going to have to deal with it, whether I wanted to or not.

But when I began to reach towards her mouth to sweep the food out with my fingers, there was no daughter.

There was only Zuul.

The child flipped out, demonstrating some moves I hadn’t yet seen.

And with my pregnant belly in the way, I couldn’t control her. So I carried her flailing body back to the high chair and strapped her in so she couldn’t hurt herself or me.

I “left” the room because, if raising a three-year old had taught us anything, we’d learned that temper tantrums require an audience. So I lurked around the corner, out of sight, sitting on the floor with my head between my knees, sobbing while she screamed. 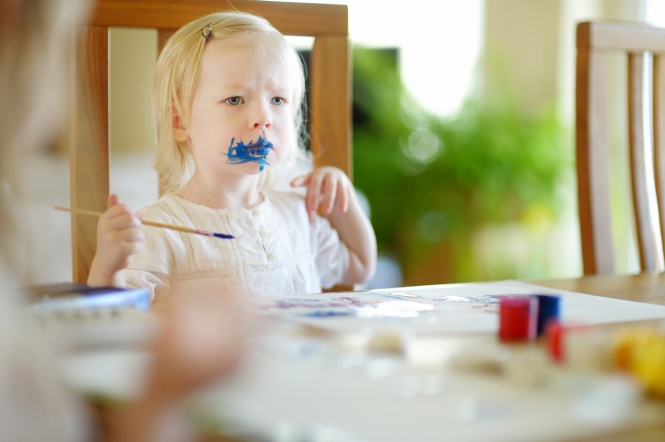 I’d had it with all the disobedience.

I’d had it with the battles of the wills.

I’d had it with the feelings of disdain for my own child.

I’d had it with the feelings of failure as her mom.

I felt God leading me to give thanks for this child.

This horribly disobedient, three-year-old-who-thinks-she’s-a-chipmunk, control freak, who was screaming like something demon-possessed in the other room.

I’m not going to say it was easy at first.

I was in the weeds of the terrible threes.

Her care for others.

Her blossoming love for Jesus.

Her knack for prayers.

Her sense of humor.

Just to name a few.

I found that the list went on and on and on. And as I sat there on the floor giving thanks for this beautifully imperfect three-year old, I got so lost in my list, I didn’t even notice that she’d finally stopped screaming in the other room.

When I finished my prayer, I pulled myself off the floor, swept her out of the high chair, and put her to bed, feeling entirely different about both her and me than I had just a few minutes before.

Are you in a difficult season with one of your children?

If so, know you’re not alone. Know there are countless other moms and dads walking their own journey of struggle right along side you.

But in our attempt to convey the appearance that we have it all together, most of us just don’t talk about it. So it feels like we’re the only parents in the world who can’t control our kids.

Having raised three children out of the terrible threes and some other difficult seasons as well, I know this too. Like any other season, this season, will pass.  And there will be things about it you’ll miss.

So stay the course.

Know there’s light at the end of this tunnel.

And along the way, when you find yourself in the midst of the toughest of days, take a parent time out to give thanks for the child (or children) that have you on your knees. It’s a truly transforming exercise that will help you regain some much needed perspective.

It may just save your day.

Do you have any strategies for changing your outlook when one of your children becomes consistently challenging?

Jennifer is a pastor’s wife, mom of three “tiggers”, part-time attorney, and Noonday Collection Independent Ambassador. She is passionate about families and loves to inspire and encourage couples as they strive to build strong, healthy relationships with God, each other, and their kids.

In a social media driven world that puts only its highlight reels online, Jennifer has observed an unmet need for deep, authentic relationships. As a result, she blogs over at Confessions Of A Pastor’s Family, where she shares transparent stories about her faith, marriage, family, and ministry so that others might see God’s transforming power in her imperfect family and be inspired to use their own families as a witness to others in the name of Jesus Christ.