Knowing that bed rest was inevitable for me, George and I began working on preparing the babies nurseries early ensuring I had an opportunity to nest.  Also, we knew it would take some time to prepare two shared nurseries so we figured we’d start early.  Since we didn’t know the gender of the babies, we began by painting both rooms a soft gray, gender neutral Pottery Barn color (you can take any color chip and have it mixed at the hardware store using a less expensive paint.)  When I say “we” painted, I mean I chose the color and George and my dad did all the work.

In preparing for four babies, cribs were a top priority.  After doing some research on safety specifications and considering design, we ordered Graco cribs online from Walmart.  We found exceptional quality for the price (under $200 each).  These cribs are “forever” beds, meaning they convert to toddler beds and full sized beds later.  Again, we did not know gender of the babies when we ordered cribs, but we wanted the nurseries to be unique from each other so we purchased two black cribs and two white ones.

Once we discovered we were expecting two boys and two girls, nursery decor became a lot more fun for us.  Having small spaces to work with, we designed our nurseries with longevity in mind.  We plan to keep the babies in toddler beds until they outgrow them.  Therefore, I did not want nursery decor that would be too babyish (e.g. baby animals).  Rather, I wanted patterns and prints that would be suitable for older children as well.

I searched for ready made bedding that matched my vision, but never stumbled upon it, not to mention I wanted to keep costs to a minimum.  Thankfully, my sister is a talented seamstress and she volunteered to sew the babies bedding and curtains.  It was a huge challenge, but just before being put on strict bed rest, we chose all the fabrics for both nurseries in just one day.

We opted to use the black furniture for the boys since it had a more masculine feel, and coordinated cheery, bright prints with it. 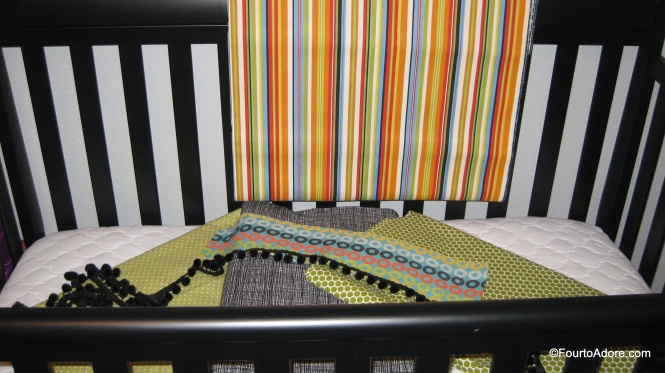 This is the boys’ fabric swatches. The bold stripe became their dust ruffle while the polka dots were for their curtains with pom pom embellishments. The black flannel and greed polka dot fabrics are now their sheets.

For the girls, we chose to use the white furniture and paired feminine, yet bold patterns with it. 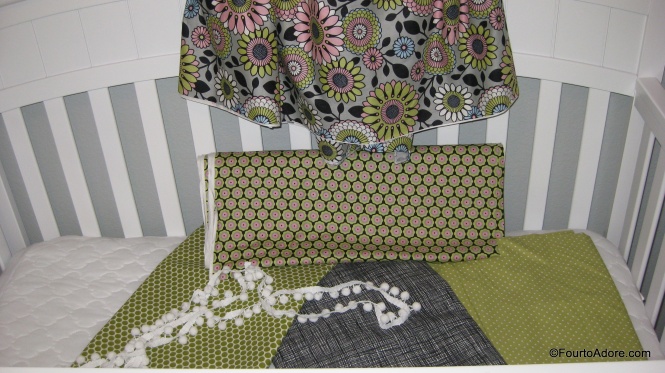 These are the girls fabric swatches. The bold floral was for their curtains and the white pom poms served as embellishments. The smaller floral print is their dust ruffle material and the black flannel and Swiss dot print were for their crib sheets.

My plan was for the sheets to be interchangeable between rooms so we didn’t have to bother with sorting them between nurseries. Although our budget was small, we wanted to create inviting, personalized rooms for the babies.  That meant creativity on our part.

To personalize each baby’s space, we purchased wooden letters from craft stores. I traced the shape of each letter onto scrapbook paper (I already had) that coordinated with the nursery fabrics and Mod Podged them to the letters. 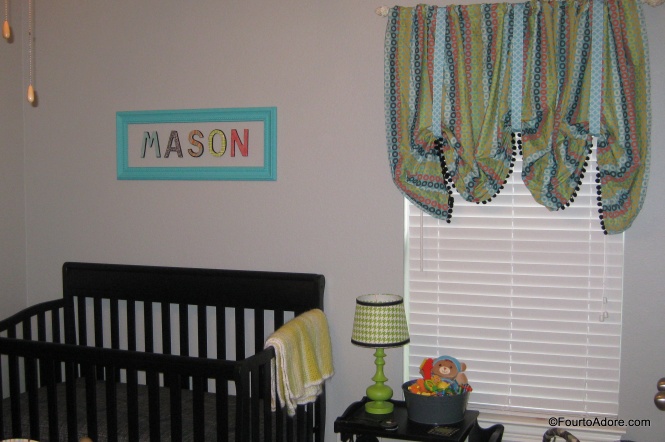 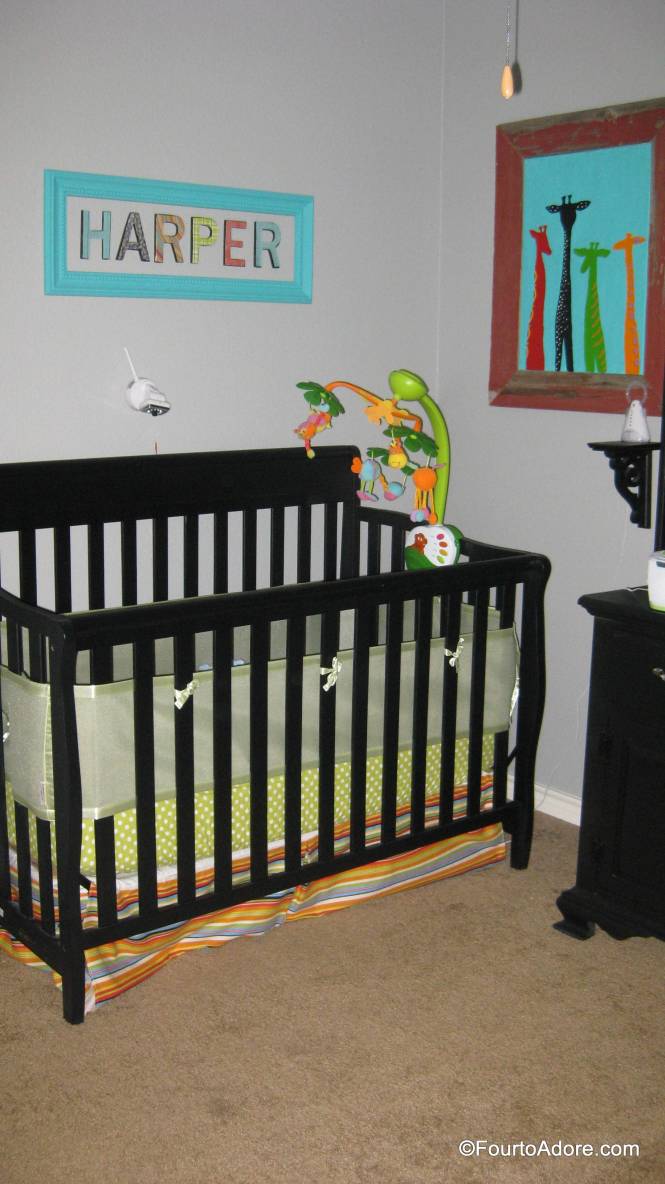 When shopping for ready made crib bedding, there seemed to be a great expense involved, but the majority of the pieces (e.g. fluffy comforters and crib bumpers) were SIDS hazards so we would never use them anyways.  So, if you don’t have a sister who can sew, I’d recommend finding cute sheets (I found some at Target I liked for about $10) and a decorative dust ruffle).  Although they aren’t the most attractive, we used the breathable mesh bumpers when the babies were little because I knew they weren’t SIDS hazards.

To give their names a boyish touch, George made frames using foam molding and painted them aqua.  He also crafted large picture frames from re-purposed barn wood and painted animal silhouettes on canvas.

Between the boys’ cribs, we moved the buffet and hutch from our dining room and converted it to a changing table and storage piece.  Inside the buffet, I found boxes from Target to organize their clothes.  It’s a practical way to use space that was cost effective.

The top of the boys’ hutch is filled with stuffed animals they received as gifts in the NICU and for Christmas. On the shelves below are family keepsakes and vintage toys from my grandmother’s house. 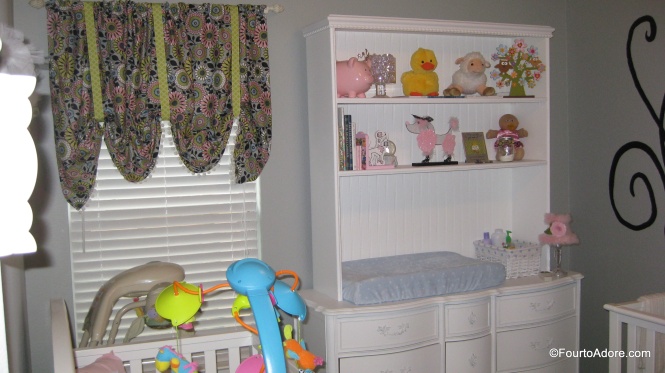 On the large wall of the girls room, George painted a black tree outline, which I decorated with silk flowers purchased online for a nominal fee (I believe $3/ dozen).  For a girly feel, I used white tulle (I already had for gift wrapping) to dangle their names from the tree painted on the wall.

The girls dresser is one we’ve had since our newly wed days.  I believe we found it for $45 at a thrift store and painted it.  It’s been several places in our home and now is perfect for the girls’ nursery.  The hardware was gold and flashy so we spray painted it white for a softer look.  To add storage space and visual appeal, George made the hutch on the top from MDF. 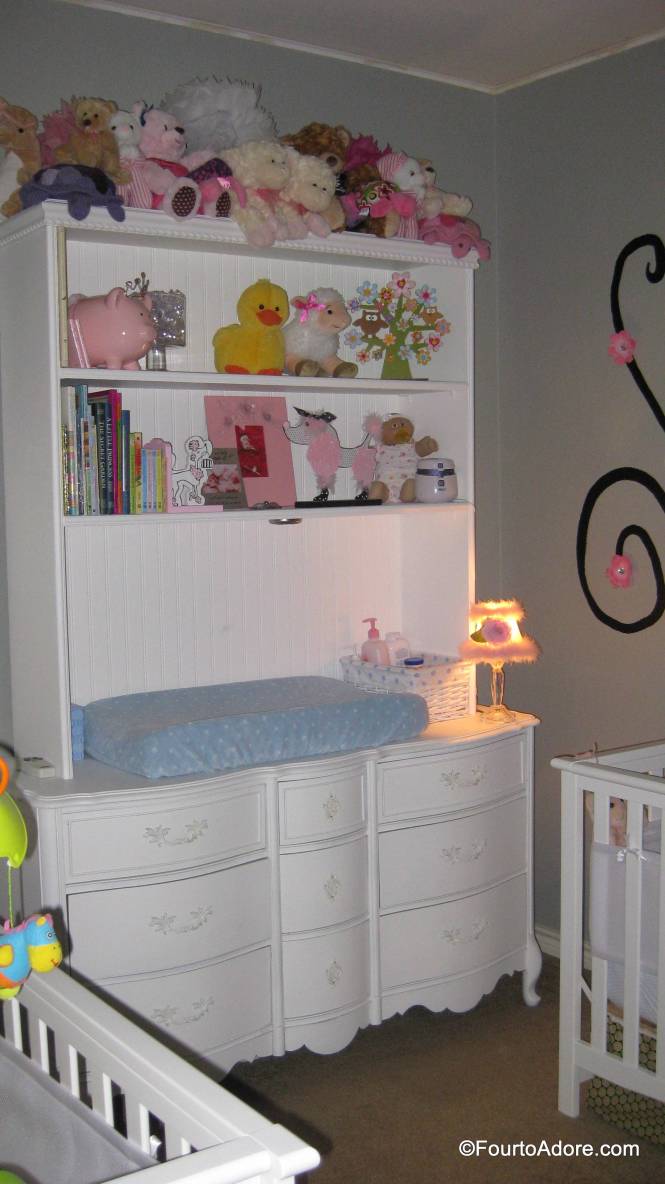 Just like in the boys’ nursery, the girls hutch is filled with stuff animals received as gifts. Most of the nick knacks below were purchased from Hobby Lobby’s clearance aisle.

With  little elbow grease, imagination, and help from my family (namely Courtney), we decorated two nurseries for four babies for approximately $1100 (with about $800 being for the cribs).  When I’m in their nurseries, I feel cozy and safe, which is what I hope the babies feel too.