Since the day I was put on bed rest it has been a challenge tackling not only household chores, but also running errands.  On a typical day I juggle simple household chores relatively well. Think REALLY basic stuff such as laundry, paying bills, and running the Swiffer.  The babies’ morning nap is when priority chores are accomplished, but I can’t exactly run to Kroger while the babies are sleeping.  On the two days when I go to work, I try to run quick errands on my way home.  I already feel as if we request entirely too much of our volunteers to ask them to stay any longer.  However, sometimes I literally need to grab baby oatmeal for the next few days or go to the chiropractor for an adjustment.  If I run an errand after work I only have about 30 minutes so that leaves a lot of errands undone.  Amazon has been a great help as we order a lot of what we need these days, but some things can’t be ordered.  Furthermore George and I enjoy running errands as a family.  We like to share opinions with each other and of course spend time together rather than apart.  As the babies are getting bigger and germs are less of a concern, we’ve devised a way to at least run some errands as a family.  This of course involves a grand scheme to make it all work.  We begin by plotting out what needs to be done, prioritizing errands, considering if we have  errands where one of us can run in while the other circles the block, and then timing our adventure around feeds and naps.

Today we survived not one, but THREE errands!  After the babies’ second feed, we furiously loaded them into the van and headed to Babies R Us. There I returned extra items and picked up a new package of bibs while George cruised the parking lot.  Upon my return to the van, George informed me that I made a fatal error.  I left my cell phone in the van so when he called to “Abort Mission” due to screaming babies I had no idea.  Oh well, errand done!

Next, we headed to Costco to load up on produce for ourselves and baby purees.  That is when the real fun began.  In order to get everyone into Costco, we each wore a baby in a front facing carrier and pushed another baby in their car seat in a Coscto cart.  Fellow quad mama, Krista, suggested the whole wear a baby idea to help us fly under the radar.  According to Krista, if you don’t bring the Runabout people are so busy they hardly notice you are there.  Well, that may work in California, but apparently nothing gets by a Texan.  People would notice George and go nuts over his “twins” then see me trailing behind with “another one” and go batty over the triplets before they realized there were actually four babies.  It was actually pretty funny.  We just smiled and nodded a lot.  People were always exceptionally nice to us and mostly just gasped in amazement.  Despite the scene we must have caused, we darted through Costco, grabbed the essentials and escaped in about 40 minutes.  On our way home we dropped by the pediatrician’s office to pick up a few formula samples.  Albeit a brief nap, the babies slept well in the 30 minute ride back home.  Even after running three errands, we managed to get home 25 minutes before the next feed.  I’m really looking forward to a time when the babies can sit up in the Costco carts so we aren’t wearing anyone.  Of course that will inevitably bring new challenges our way. 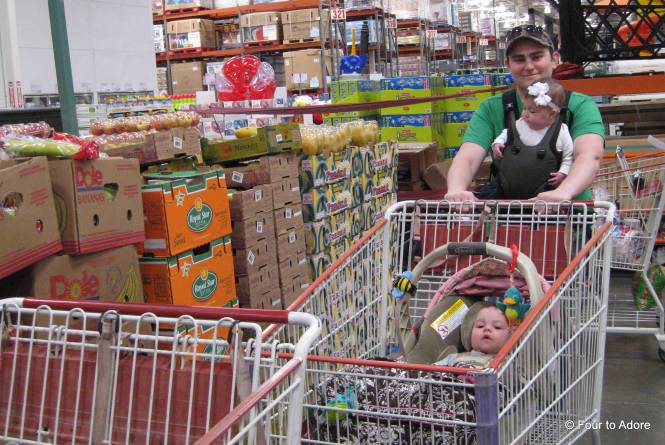 If you were shopping our our neighborhood Costco today, you would have observed this scene. 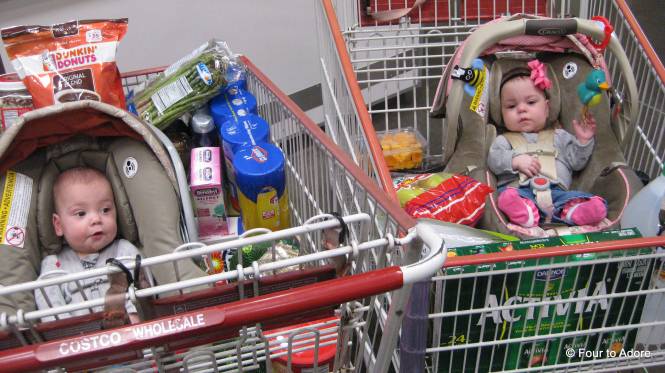 Here’s the shopping aftermath! As we left, the woman at customer service inquired about the boy/ girl ratio. When we told her it was 2 boys, 2 girls she replied, “That’s perfect! I’m jealous”. I thought that was a cute, candid remark. 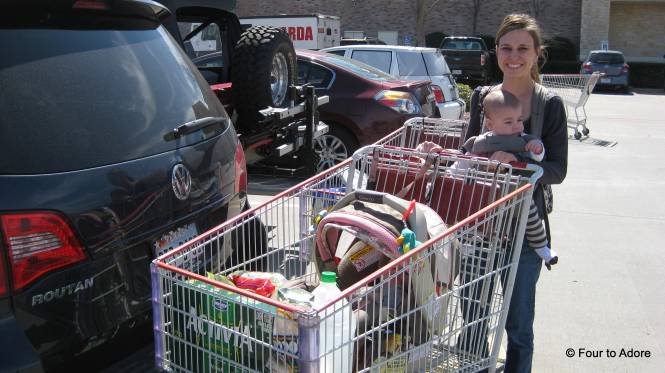 I put Harper in the Baby Bjorn today because I think he may be running out of opportunities. He currently weighs a whopping 18 pounds and I don’t know how much longer my back can support him! 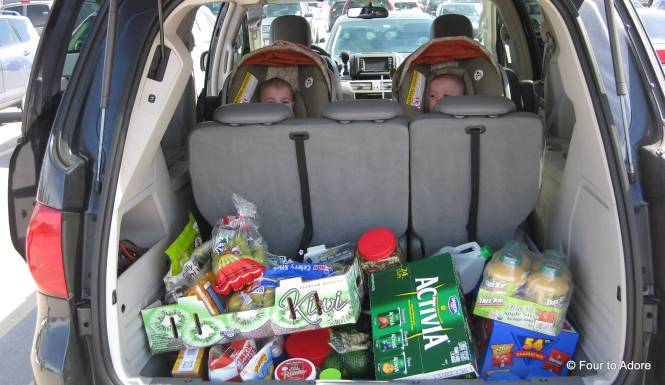 After shopping, we loaded all babies then the groceries into the van. I always felt bad that the boys have to sit in the back, but I think they have a much better view than the girls. 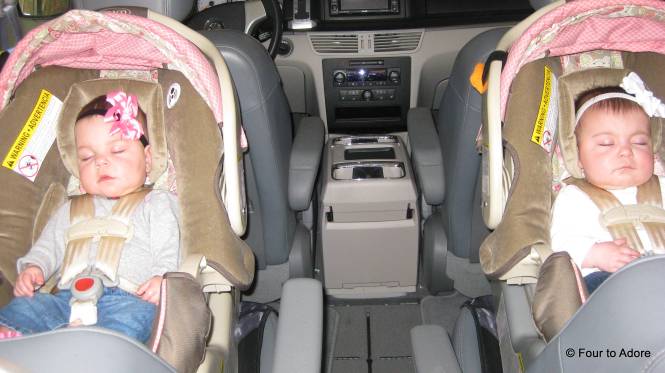 The babies finished snoozing as we unloaded the van at home.