This has been a BUSY week in Quadland so it’s our first post since last Thursday!  I’ve been working on another post, but I’m yet to finish that one.  We’re linking up with Rebecca at A Beautiful Ruckus for The Little Things Thursdays again.  If you have spare time,  don’t forget to check out what little things were happening around the blogosphere this week.

Reflecting on our week, I realized I’ve been doing a good bit of online shopping and quite a few boxes arrived at our house this week.  Prior to having the babies I loved to bargain shop and would jaunt here and there seeking the best deals.  That is a bit tricky since it usually requires two babysitters for me to leave the house.  Hence, online shopping gets the job done.  I still bargain hunt just in a new fangled way.  I often check pricegrabber.com to see who has the best prices.  Waiting for all of our boxes of new stuff to arrive is plain fun!  Here’s what was new at our house this week:

1.  One staple of our babies’ wardrobes is Baby Legs.  They are FANTASTIC!  Every time we make a trip to the doctor, the babies don Onsies with coordinating Baby Legs.  When they need shots, we just pull the Baby Legs down a bit without having to finagle miniature pants and socks.  After the shots are done, we load them up and leave.  I’ve also figured out that Baby Legs work as lightweight jackets when we stroll around the neighborhood in our Runabout!

Harper and Sydney are modeling their Baby Legs here.

2. Now that the babies are eating real food, we have to prepare said food.  We’ve been experimenting with existing kitchen equipment including a Baby Bullet gifted to us, our old Magic Bullet, rice cooker, blender, and food processor.  These gadgets got the job accomplished, but very inefficiently.  For example, the Baby Bullet took 13 minutes to steam a single pear where we had a five pound bag to puree!  After some research we added two new appliances to our arsenal: The Ninja 1100 and 20 cup Aroma rice cooker/ steamer.  Both appliances are multi-purpose and we hope will grow with our family.  We gave them a test run last night and were able to process the pears in about 25 minutes, including cook time. 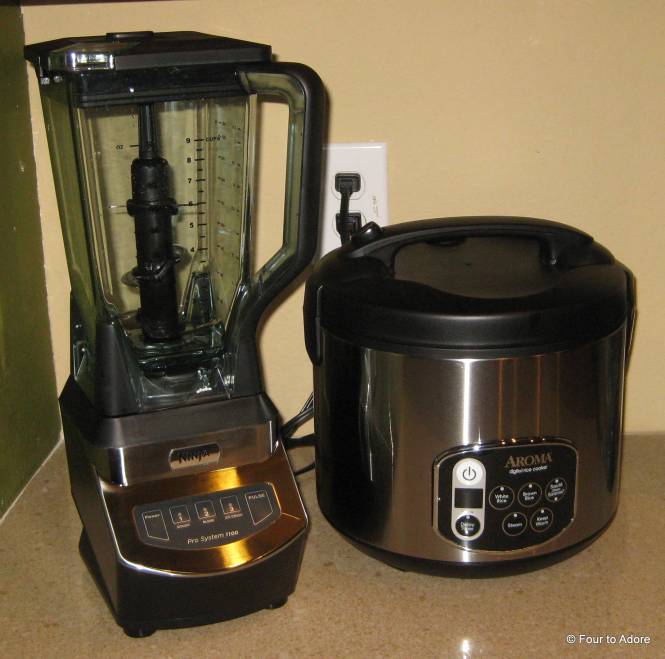 3.  Sunday afternoon, I left George in charge of the babies and headed to Costco.  I picked up organic produce for baby food as well as a few other essentials.  Today the babies gave butternut squash a try and LOVED it!  I think we have a new family favorite along with bananas.  Rylin took thirds of this yummy concoction!

4. When the babies were in the NICU, the occupational therapist there introduced us to Wubbanub pacifiers.  Since then, each baby has used the same Wubbanub.  Recently, they have become sort of “security blankets” as the babies enjoy holding them and rubbing them on their faces or gnawing on the limbs.  One day I washed them and left them out to air dry.  This did not bode well with Mason who refused his nap until given a damp Wubbanub.  Thus, I ordered a second set for backups!

5. As the babies began expressing interest in holding their bottles, I thought it might be time to try trainer cups.  I ordered a variety of different ones to experiment with and also pulled out some the babies received for Christmas.  I’ve been putting about an ounce of water in them and letting the babies try to pick them up. 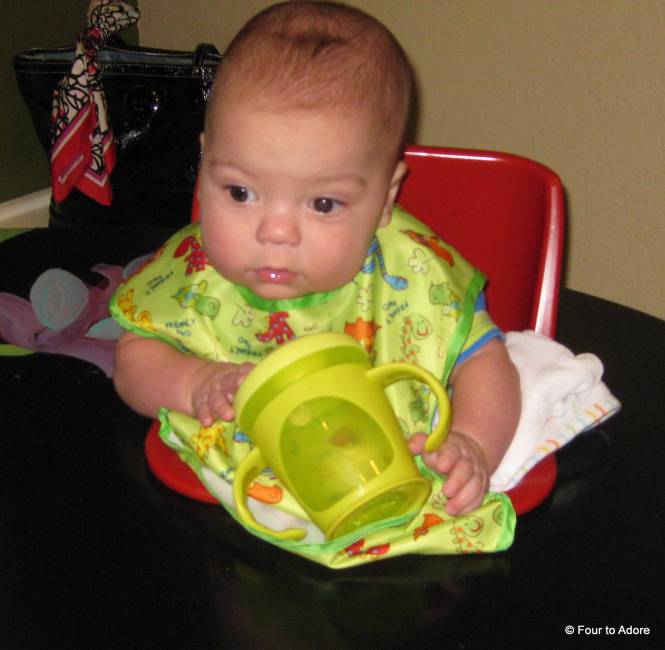 Mason was the only one who seemed interested in the sippy cups today.

6. The weather here has been absolutely lovely.  Despite being February we had highs in the 70’s this week.  We’ve logged more time in the Runabout with this weather.  We use the sun shade, but the babies heads and faces are usually exposed to the harsh sunlight.  They have plenty of winter hats, but no sun hats.  So, I ordered some from The Children’s Place.  George chose a fedora for Harper and military hat for Mason while the girls got floppy sun hats.  They each modeled their hats today.  Sydney was a bit perplexed at the size of hers.  Apparently she will be able to wear it all summer long!

What little things happened in your week?  Is there anything new at your house?