It’s Thursday so you know what that means….time to link up with A Beautiful Ruckus for The Little Things Thursdays. If you are new to our blog, we pause each Thursday to reflect upon some of the little things that brought joy to our family.

1. We’ve hosted several play dates at our house, but this week we were invited to one! With the help of my friend, Jen, the babies and I went to the Glawson Triplet’s house for round #2 of the Quadtriplet Playdate. We headed over after the babies woke from their afternoon nap, which was a great diversion from witching hour. At first, Rylin was hesitant to enjoy herself.  She screamed like a banshee and clung tightly to me. Thankfully it was short-lived and all seven babies eventually seemed to have fun. As a bonus, the triplet’s big sister, Ryleigh was there and took up post as resident baby-entertainer. She is a devoted sister who knows her way around a baby. 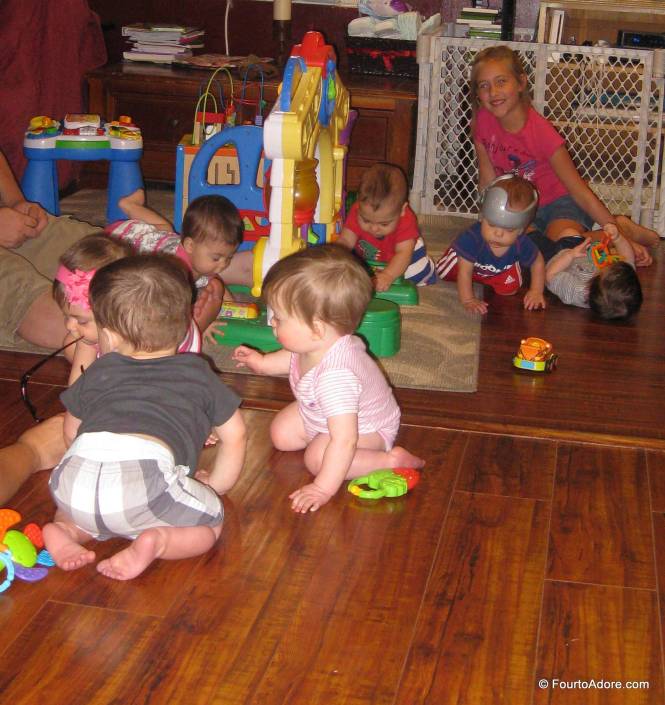 All seven babies and Ryleigh are in this picture. It’s a bit like playing “Where’s Waldo”, but if you squint, you can see all of them.

It’s always nice to have play dates with other multiples because they aren’t overwhelmed with all the babies and have the daycare scene at home.

2. After fellow quad mama, Krista, successfully bathed all four of her babies at once, I decided to try my hand. It was by no means perfect, but at least I know it’s possible and it gave me a boost of confidence. I also learned that we can manage without bath seats. However, I have a lot of work to do with Rylin and compliance. She insists on standing in the tub, which means I cannot bathe her sans seat with other babies until she follows the rules. I haven’t tried, but could probably bathe the other three at once without too many problems. 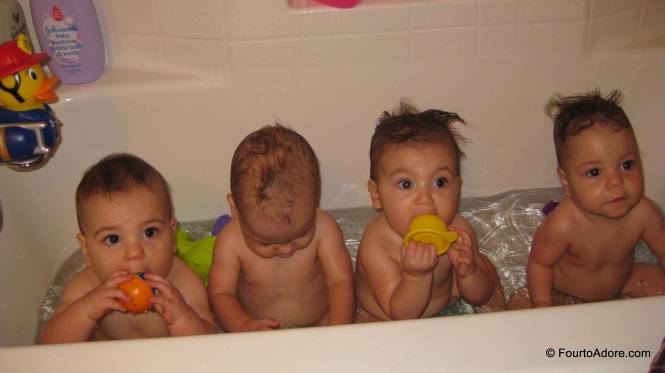 Here are the four little quadlings all lined up: Harper, Mason, Rylin, & Sydney.

3. I was able to take advantage of having our weekday babysitters to catch up on some emails on blog posts. I was grumbling to George about wanting to write so many things. He replied, “Well, you have a laptop. Why don’t you take it to Starbucks?” Stellar idea! I ended up hitting Panera so I could enjoy some lunch while accomplishing some writing.

4. It is the first week in July and the Texas weather is fantastic! Apparently there is some weather pattern hovering over Arizona and pushing cool air our way. We LOVE it! It actually felt crisp in the mornings and evenings, which is refreshing.  Happy Fourth of July!

5. Sydney is my patient gal.  She was fussy one day so I took her into a new place, the master bathroom.  There she calmly allowed me to paint her toes azul.  I had to work quickly using a Q-tip and I used Sally Hansen’s Insta Dry polish (seriously that stuff dries almost instantly), but got all ten piggy toes done.  I tried on Rylin later, but it did not go well with her. 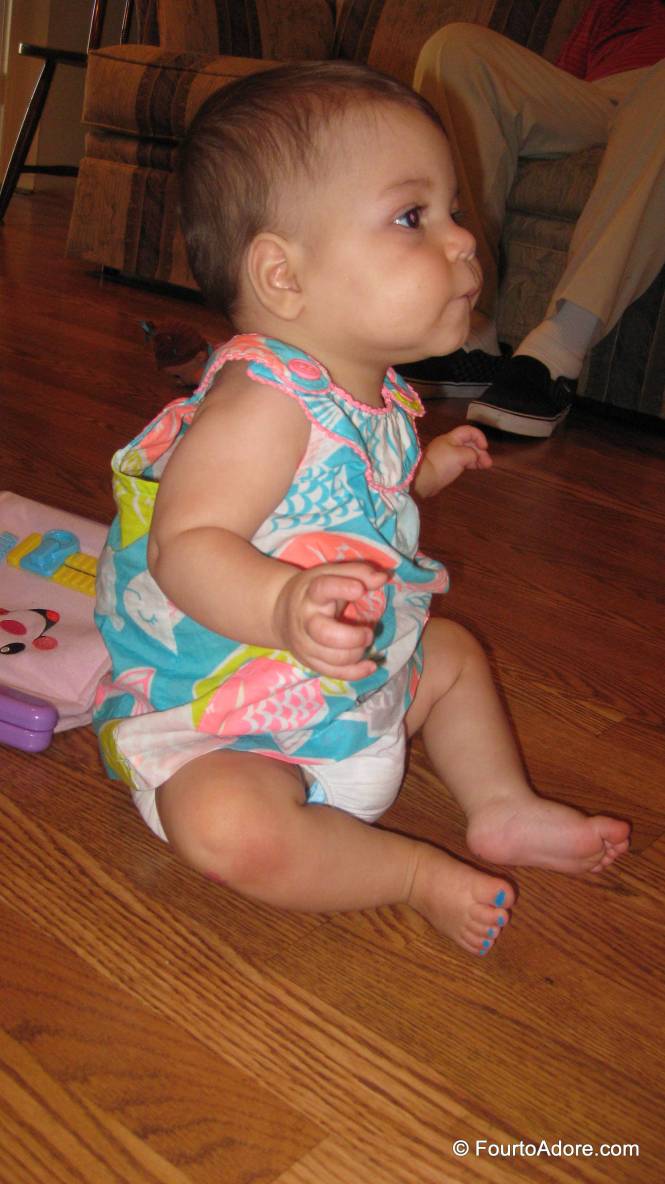 Aunt Cici’s reaction to seeing these tiny painted toes was priceless. She gasped in delight!

Where was the sunshine in your week?