Winters in Texas are notoriously mild.  Earlier this week we enjoyed temperatures in the high 70’s.  It was warm enough to warrant running our ceiling fans, and almost enough for the a/c.  As the week progressed, or local meteorologists warned of an upcoming winter storm.  By Thursday evening the ground was sealed with a thick sheet of ice.

While every school child wishes for a snow day, staff dreads them.  We all know that a snow day means make up work later, and time being captives at home.  I held out hope the weather would improve, but it didn’t and to my dismay our school systems closed.   I only work two days per week, and Friday happens to be one of my work days.  Schools  being closed meant I was staying home Friday while George trekked to work.   Oddly, I panicked a little.  Thursday evening I searched Pinterest for fun indoor activities for toddlers as a day of being trapped indoors loomed.  Most everything within my search was either something we already do, or involved something the quads would eat.  They still put most everything in their mouths and supervising eight hands with tiny objects is daunting.

We aren’t on lock down anymore, but during the week,  we are generally home.  Even when weather is nice, I struggle to take the quads into our yard because it’s a massive challenge to supervise everyone adequately.  Honestly, staying home Friday would be close to a typical day for us.  However, there is something about knowing you are trapped at home, and inside.  I may not get out with the quads on my own much, but I find comfort knowing we can.   We always have the Runabout if we want some fresh air.

When we awoke in the morning, it there really was a beautiful scene outdoors.  I had nothing new to occupy the quads.  I contemplated the fact that this was the first time the quads were old enough to bundle up and venture out on a wintry day.   By lunchtime, I really wanted the quads to get a chance to play outside in the cold.  We’ve been talking a lot about snowmen, cold weather, and Santa lately.   I wanted them to experience the cold.   I considered how to bundle them knowing their “coats” are actually fleece jackets.  We don’t have snowsuits in Texas, ya’ll.  With a little creativity, I came up with this get up-

Everyone was already wearing a romper and socks. I added a pair of Baby Legs under their romper and on their arms, then I added hats, mittens, and fleece pajamas. Bam! Texas style baby snow suits. The best part was not dealing with shoes.

Mason refused to wear his mittens (I think he saw the pink bow on them), and Harper’s mittens were actually socks.  I know we have a disc sled somewhere in the attic, but I wasn’t sure quite where. Besides, a Texas sled aka laundry basket is the best way to transport for toddlers anyways.

Apologies for my poor videography here.  It’s no easy feat managing four toddlers on ice as a solo act.

When I bundled the quads, I planned to keep them in the laundry basket.  Our yard is terribly uneven and they struggle to walk on grass period.   It was cramped quarters in there, and they seemed to want to explore more so I bailed them out.  To my surprise, they managed prancing around on the ice rather well.   I suspect the ice evened the ground a bit, helping the cause. 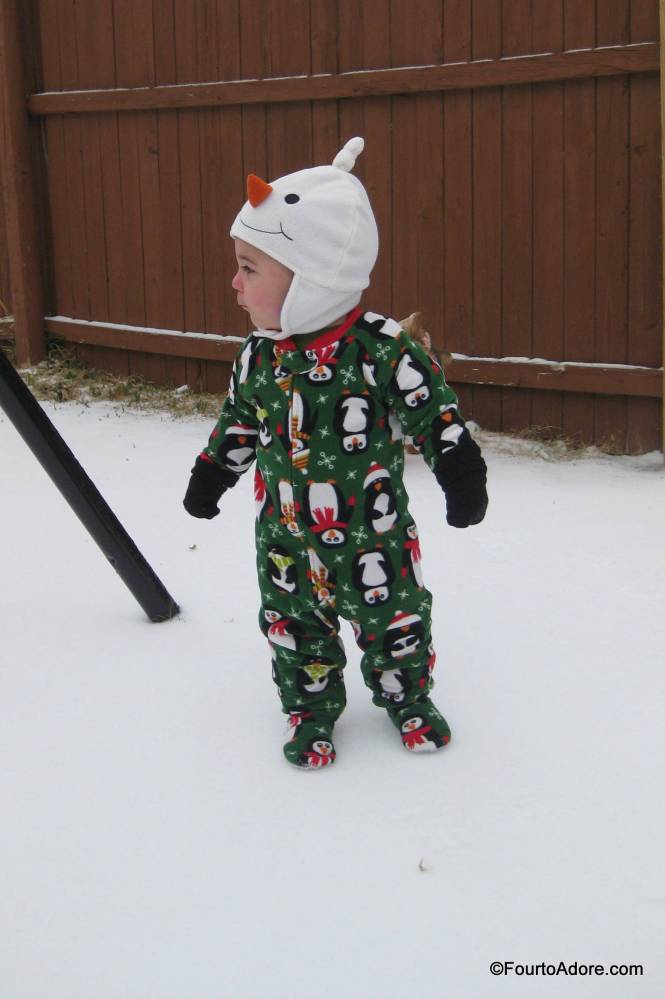 When Mason looked like this, I decided it was time to retreat before his tears froze.

We probably stayed outside roughly the same amount of time it took me to dress everyone, but it was worthwhile.  Stripping them out of their faux snow suits was relatively painless, and I just tossed everything in the dryer.  To warm up, we snuggled under a Sherpa blanket as we watched part of The Sound of Music, which amazingly captivates them.

We are on day two of ice day, and I do have a few new activities to try.  Hopefully I’ll get around to sharing later.

What is your favoriteice day activity?

23 thoughts on “No Snowsuits in Texas, Ya’ll”