George supported himself in college by answering phones and taking orders for a local florist.   The hours were ideal for a college student, he went in sometime after lunch and was off by six.  Except for two weeks of the year: the week of Valentine’s Day and Mother’s Day.  During those weeks, it was not unusual for him to work overtime until 11 pm later.  Even though both weeks were flooded with orders, George once mentioned how Mother’s Day was far busier because everyone doesn’t have a Valentine, but everyone has a mother.  It made sense to me at the time.  A decade later, I see Mother’s Day through new eyes.

Just like Valentine’s Day, Mother’s Day has become somewhat of a commercial holiday where people feel obligated to honor certain people in their life, and people feel entitled to recognition on these particular days.  What about the other 364 days of the year?   Shouldn’t we let the people we love know how much we care on a daily basis?  Even though they’ve become commercial holidays, I’m not most bothered by that aspect.  I’m far more concerned about the people who won’t be celebrating.   To many, Valentine’s Day is only a painful reminder that they are lonely hearts.   Where Mother’s Day is wrought with pain for those who grieve for their mothers or children and for those who yearn to become mothers.   It’s a day they can only hope will pass with haste.

This pain is something familiar to me from the years I grasped at every shred of hope that Mother’s Day would finally hold meaning to me.  In 2012, Mother’s Day was one of juxtaposed emotion for me.  At that time, I was expecting the quadruplets, but everything was uncertain and I still felt pangs of grief from miscarriage.  Not only was it my first Mother’s Day since miscarrying, but also my due date for that baby was on Mother’s Day.  I felt empty still.

Last year when my first Mother’s Day with children came around, I raised the bar high.  Too high.  George didn’t roll out the red carpets and shower me in the lavish gifts I expected, which hurt my feelings.  I was entitled because it was MY day!  I remember lashing out at him before going to bed.  Seriously where were MY gifts???

The day after Mother’s Day he presented me with a custom made cross necklace surrounded by four rubies representing the quads.  It was extremely thoughtful, but I felt ashamed for expecting it.  While we have not perfected it, George and I are working on appreciating each other on a daily basis and not putting stalk into material things.  I had everything I could have ever wanted on that Mother’s Day and more, our four beautiful children.  Just one year prior, I would have given up both arms just to have children.  While my heart is full of love for them, I am also aware of the despair some will experience today, and I pray they never lose hope.

While I was undergoing fertility treatments, I attended monthly support group meetings at our clinic.  There, I found a sisterhood of others experiencing the same emptiness and longing I felt.  At one of the meetings, we discussed the “survivor guilt” that occurs when one transitions from infertility patient to pregnant patient.  A common sentiment experienced by women experiencing infertility is one of emotional pain upon seeing expectant mothers or receiving pregnancy announcements.  It could be viewed as jealousy, but that’s not exactly the emotion.  I’s more of a reminder of what is missing.  At that particular meeting, we discussed how it would be nice to know when another woman was part of the sisterhood, someone who also experienced the pain of infertility.  Someone mentioned how it would be perfect if there were a secret signal that projected “I’m your sister, I was once in your shoes.  There is hope.”  After that meeting I secretly began imagining that every expectant mother was indeed part of the infertility sisterhood, and it helped that nagging feeling of pain subside.  Little did I know that I would someday wear a blaring sign that I was once a member of the infertility club, and it would come in the shape of four same aged babies.

When the quads were about six months old, I began taking them for walks in the quad stroller almost every evening.  It was a fantastic way of managing “witching hour” with four cranky babies.    One evening as I strolled about the neighborhood I remember a red Ford Explorer passing us, and then looping back around very slowly.  I was taken aback as the driver eventually pulled over, parked, and got out to approach me.  There were many people outside at the time.  Parents supervised their children, joggers passed, and people returned home from work.  I also had wasp spray ready to attack anyone who seemed dangerous.  I felt at ease even a the driver approached me.  I remember him making eye contact with a look of pain and sincerity in his eyes.  He told me that he would understand if I didn’t want to answer, but inquired whether we needed fertility treatments.  Because I felt safe, I admitted we did.  This now vulnerable man now faced me as he sighed and confessed that he and his wife were undergoing treatments.  At this point, they knew the bitter feelings of repeated and failed treatments.  They were quickly approaching a crossroads of deciding whether or not to continue treatments.  We spent a while sharing our experiences, but before parting ways the gentleman said, seeing you and the babies restored my HOPE.   Hearing that struck a chord with me because at that moment I knew that I wore the sign for other people experiencing fertility that says, “I’m your sister, I was once in your shoes.  There is hope.”  I’ve addressed what to say to parents of multiples and what not to say to parents of multiples, and in both articles I shared that it is impolite to inquire whether the babies are “natural” because it is such a personal question.  However, when someone divulges to me that they are undergoing fertility treatment or once were, I’m usually open to sharing because I want them to feel HOPE.   So if you are reading this and for whatever reason feel the pangs of grief or despair, please never lose hope.  Hope really is one of the most valuable treasures we possess.

In honor of my mother and grandmothers, the quads helped me create a visual representation of HOPE, after all they are the most powerful reminder I have of hope. 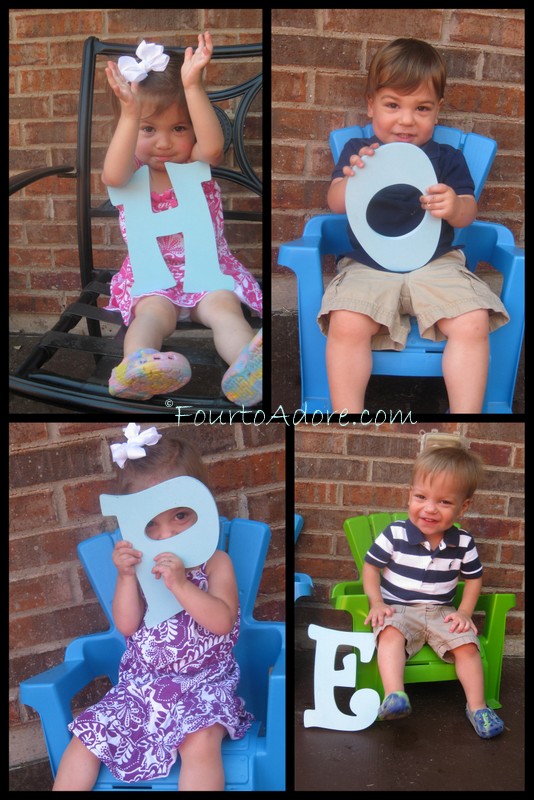 These were my four favorite outtakes. 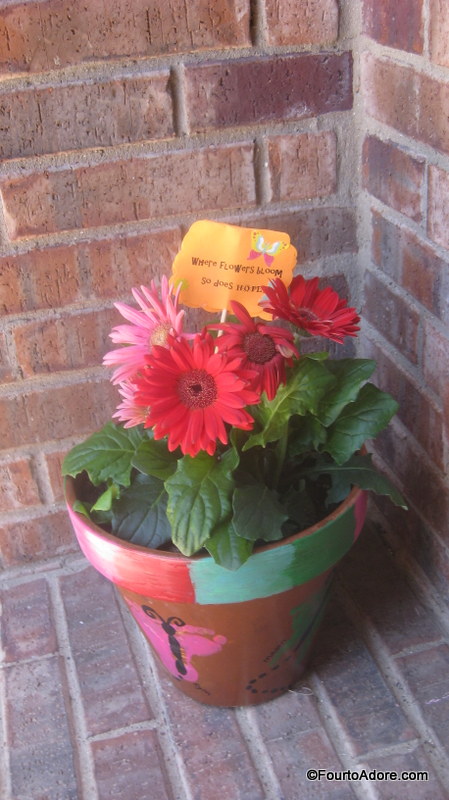 For my mother, I painted the babies’ feet and stamped them onto a Terra cotta pot in the shape of butterflies. I added a sign that reads, “Where flowers bloom so does hope.” 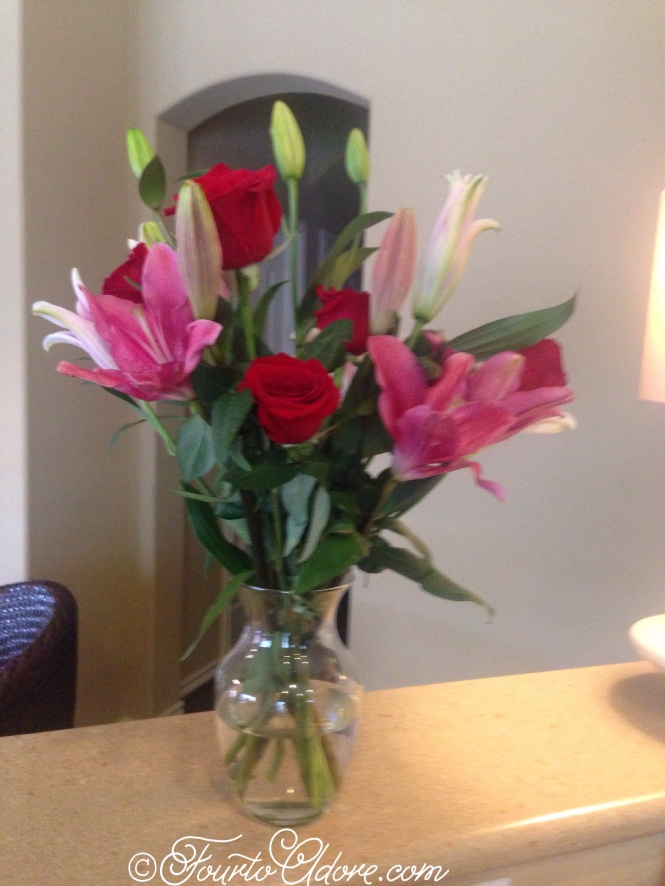 While George worked at the floral shop, I recieved more than my fair share of flowers. Consquently, George stopped wanting to bring home flowers when he no longer worked there. I was ecstatic when he brought these home Thursday evening. They were his way of letting me know he appreciates me, and it was perfect.

What are the symbols of hope in your life?

P. S. Through mutual acquaintances, I learned that the driver who stopped me that day is expecting a baby boy in June!