As soon as the temperatures rose to the 90’s we started enjoying water play in the back yard almost daily.   Between our water table and inflatable pools, the quads have passed many hours of splishing and splashing.  However, Fourth of July weekend marked their first time in a full sized pool since last summer.  When they were little babies, we bought Swim Ways inflatable baby floats, which worked great for water exposure.

This summer, the quads would have fit easily into their old floats, but as busy toddlers, they would have been irritated by the constraints of a float.  Instead, I decided we’d try the Puddle Jumpers, which were given to us by the Crisanti Quads earlier this year.  Before heading to the pool, I attempted to get the quads to wear their Puddle Jumpers around the house, but only Harper agreed to this idea.  The others fought me tooth and nail so I wasn’t expecting much at the pool.  In fact, I braced myself to sideline at least three toddlers at the pool if necessary.

On July Fourth, we visited our family friends, the Turner’s.   Since they have a beautiful pool, it was time for the maiden voyage with the Puddle Jumpers.  Although they initially resisted, each of the quads eventually donned a Puddle Jumper.  The next problem…getting them to wear them in the water.  Initially all four were extremely timid and hesitant to touch the water.  After all, the water was cool in comparison to the Texas heat and they were wearing foreign devices.   Each of the quads was paired with an adult who coaxed them into the water and showed them how to splash and blow bubbles.  Of the quads, Sydney proved herself to be brave.  She happily jumped to us, back floated, and kicked her legs about.  In time, the others enjoyed themselves and worked up hearty appetites for our barbecue.

They had a second opportunity to use Puddle Jumpers at Grandaddy’s house later in the weekend.   This time, all four were more eager to enjoy the pool.  To my surprise, they all seemed to appreciate the goggles I scored at the Dollar Tree earlier in the week.  Keeping their eyes free of water seemed to really help ease them into the pool.  Even with a healthy fear of the water, all four enjoyed lots of jumping and kicking around the pool.

Even with the Puddle Jumpers, we watched the quads like hawks since they could easily face forward in the water.   This year we opted out of swimming lessons since we’d probably only visit a large pool a handful of times at best, and the quads wouldn’t be able to recall skills learned next year.  When they are old enough to participate in a class and develop salient memories, we will absolutely enroll them in swim lessons.  Swimming is a critical life skill.  In the meantime, we are fans of Puddle Jumpers!

Just for fun, George and I took snapshots of the quads on the Fourth of July using our color accent feature on the camera.

I realize it’s not kosher to allow an American flag to touch the ground…but with four almost two-year olds around, they may have grazed the ground a bit. Please forgive us. 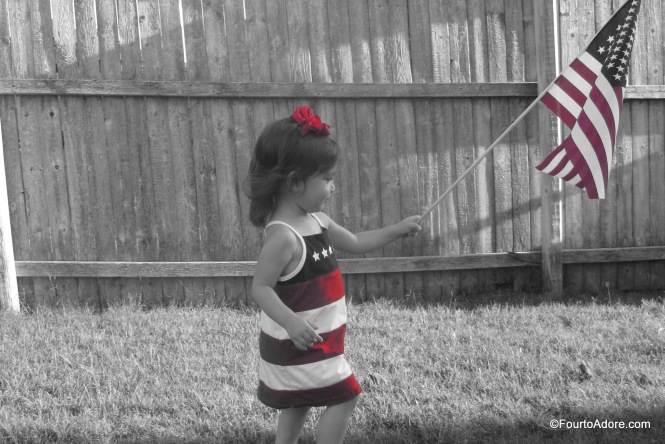 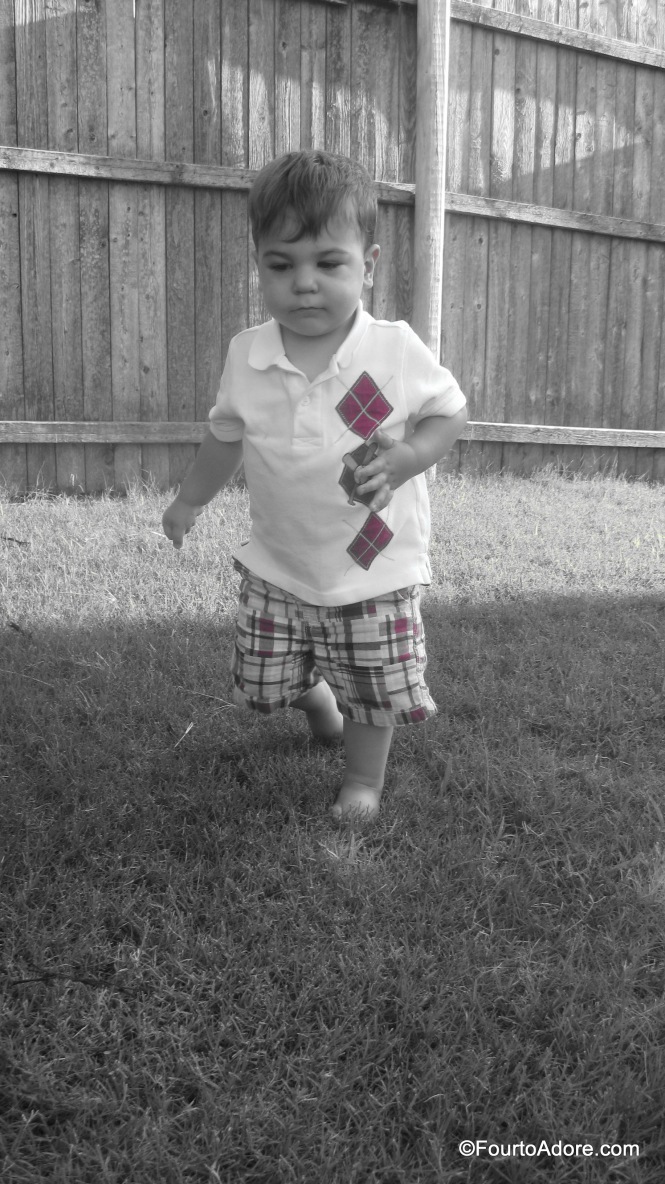 How old were you when you learned how to swim?  Who taught you?