Before the quads, George and I enjoyed trying local eateries, sampling different ethnic cuisines, and trying our own hands at the culinary arts.  During my pregnancy with the quads, our foodie days quickly became a distant memory.  I couldn’t venture out and there was no time for whipping up new dishes.  Much to our dismay, many meals were reminiscent of our college years and newlywed days.  You know, boxed macaroni and cheese and Hamburger Helper type meals.  Not terribly adventurous or healthy stuff, but it was what we needed then.

As we began to adjust to life with quads, we slowly began cooking again, but meals were simple and often from the slow cooker.  It was sustenance, not really anything a foodie would appreciate.  When the quads were six months old, we excitedly began serving up homemade baby food and took great pride in expanding their palates.

Once the quads experienced a reasonable variety of foods AND had enough teeth for noshing, they started eating family dinners with us.   Now, as toddlers they most certainly express their opinions on food.  That doesn’t stop us from serving them a wide array of foods, and giving them many chances to decide if they are willing to sample them.  I’ve heard it can take a toddler over a dozen exposures before they’ll decide if a food is liked or not!  And, they are fickle.  One day they’ll gorge themselves on something and the next day refuse the same item  (this has happened with everything from bananas to tacos).  They are fans of the usual kid favorites: chicken nuggets, macaroni and cheese, and yogurt.  BUT atop the list of favorites are black beans, quinoa, curry chicken with roti or basmati rice, and pomegranite.

As they are maturing becoming easier to manage outside the home, we are gradually trying new eateries fit for foodies.  At the start of the summer, our friends Allison and Preston, joined us for an al fresco meal at a food truck park.  There, the quads enjoyed street tacos, tater tots with jack cheese and chives and salted watermelon lemonade.

The food truck park didn’t have high chairs or booster seats so we improvised with our Combi twin strollers.

Mmmmmm, street tacos with salted watermelon lemonade! I don’t even typically like watermelon and found this drink extremely refreshing as it screamed “summer!”

Though the quads enjoyed their meal from stroller seats, they proved they were capable of sitting a the big kids table.  Next time, we probably won’t bother with strollers.

Not long after our food truck adventures, Aunt CiCi and Matt joined us for a Thai lunch.  There, the crew scarfed fried rice, padthai, and spring rolls.  This particular place may become a family hot spot since they also boast a toddler play area!  It worked splendidly for occupying quaddlers as our meal was prepared.  I love watching the quads as they experience these new things, and hope with continued exposure they develop an appreciation for trying new foods and of other cultures in general.

The toddler play area included a playhouse, which could have easily entertained the quads for hours. Thankfully, our food was ready much sooner than that. 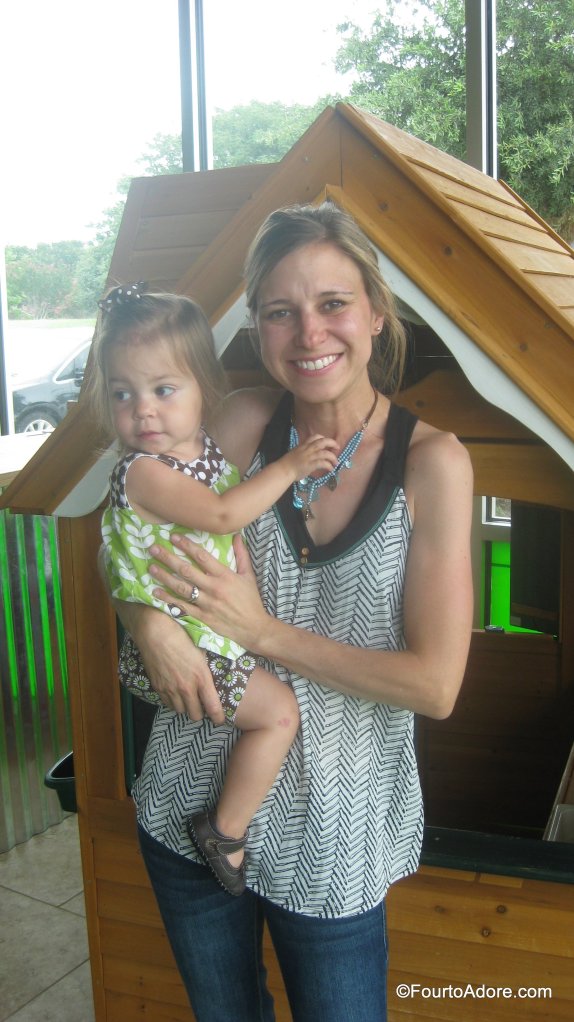 I’d love to have a playhouse like this in our backyard!

Spring rolls and padthai were both beloved by the entire family, and everyone enjoyed eating leftovers later that night for dinner.

Another perk of this establishment? HUGE tables and plenty of high chairs to accommodate our family.

What is your favorite type of cuisine?