I remember the days B. Q. (before quads) when I yearned to have a baby and had all sorts of notions about what motherhood would mean.  At that time, I’d see mothers out and about with their littles in tow.  It seemed that every woman I passed had an adorable “mini me” clad in Janie & Jack attire with a winning toothless grin.  I fantasized about dressing my own baby up in itty bitty boutique outfits and having a chubby cheeked baby sitting in my shopping cart.  Of course, my baby would never wail, smell rotten, or spit up.  My baby would be perfect at all times.  (A girl can dream, right?)

When our instant family of quads arrived, I found myself getting plenty of baby snuggles but I was also marooned.  My fragile babies couldn’t go anywhere besides the doctor for a full year.  When the days of lockdown ceased, George and I seized every opportunity to let the quads explore their world.  We toted them to museums, stores, restaurants, and anywhere else we thought we could safely take them.  Many of our field trips involved other friends and family members to help wrangle the tots.   No matter where we ventured, it was always a four ring circus for many reasons.  It wasn’t quite what I envisioned in my fantasy world.

Despite our many family adventures, I had never loaded the quads into the van myself and taken them out in public.  Not once.  I’ve taken them out alone, or in pairs myself.  And, we’ve enjoyed many play dates on our own and taken trips to the neighborhood strip mall in our Runabout, but never a legit outing just the five of us.

The notion of being alone with four babies in a public place terrified me.  Each time I considered a quick errand with them on my own, I immediately conjured up a laundry list of scenarios from downright embarrassing to horrific.  I thought surely before they were two I’d have the courage to take them out own my own,  just once, but I didn’t.  Their second birthday came and went, but my fears paralyzed me still.   Every last one of my quad mama pals took the plunge and flashed pictures of their success stories with a pile of kids in a cart somewhere.  They could do it, why couldn’t I? Thursday morning I decided it was time.  We were going to Target.  After all, Target boasts triple seater carts, sells most anything my heart desires, and it puts people in a trance with its merchandising tactics.

Thursday morning after breakfast, I scribbled a quick list of items we needed and scrambled to get everyone dressed.  Naturally, everyone was uncooperative.  All four were whining without mercy.  Entire bins of toys were dumped and strewn about the house creating landmines for me.  Though I felt discouraged and now concerned about how they’d behave, I was also determined.  As soon as everyone was sufficiently dressed, I hustled the crew to the van where I strapped everyone in.  Much to my chagrin, everyone settled once the van was in motion and I revved up our best kid tune playlist.  I thought, “Okay, we CAN do this!”, and made a beeline to Target.

Upon our arrival at Target, I circled the parking lot for THE cart.  I spotted one in the back corner of the parking lot and parked beside it.  I loaded Harper and Sydney in the harnessed seats, Mason in the main cart seat, and padded Rylin in the buggy with threats to her life should she stand. (Rylin is by far the most opinionated and strong-willed of the quads, but she’s also the most obedient of the pack, which makes her trustworthy with responsibility.)

I strutted into Target with my brood of smiling toddlers and it felt darn good.  I know the layout of Target like the back of my hand so  I started tackling each item on the list and making sure to skim end caps for clearance finds.  Thirty minutes into the trip and all four were chipper and clearly enjoying the scenery.  In fact, I hadn’t offered a single snack to anyone.  I ponied on, grabbing more items off the list.  At 45 minutes of Target time, all items on the list (plus a few extras) were loaded into our cart and I had four happy children.  WOW!!!!  At that point, it was time to check out, but they earned their individual baggies of Fruit Loops and loads of praise for their upstanding behavior.   I checked out, loaded our goods into the van, and loaded four toddlers without incident.  SUCCESS!!!!

It feels liberating to finally conquer my fears of taking the foursome out own my own, and I feel encouraged to try more things myself.  I know every trip out won’t be so easy, (and it wouldn’t be if there were just one toddler either) but at least I know successful trips CAN and WILL happen.

One of my many fears about solo outings was handling the public Q & A sessions. I don’t mind answering questions, but being alone meant we needed to stay the course. Interestingly enough, at 10:00 am on a Thursday our local Target was primarily populated with moms that had full carts of kids. I saw at least five other moms with more than three kids. It seemed that most shoppers at that day and time were on a mission of their own, and didn’t have time to worry about my crew. Dare I say it was peaceful? 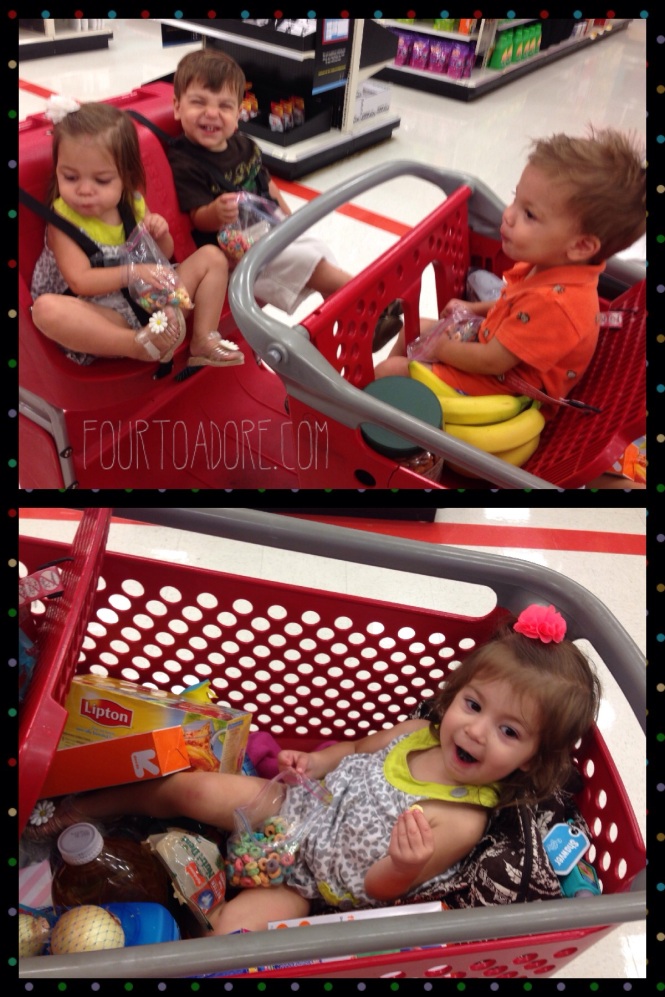 It wasn’t long before Rylin realized the diaper bag doubled as a pillow. 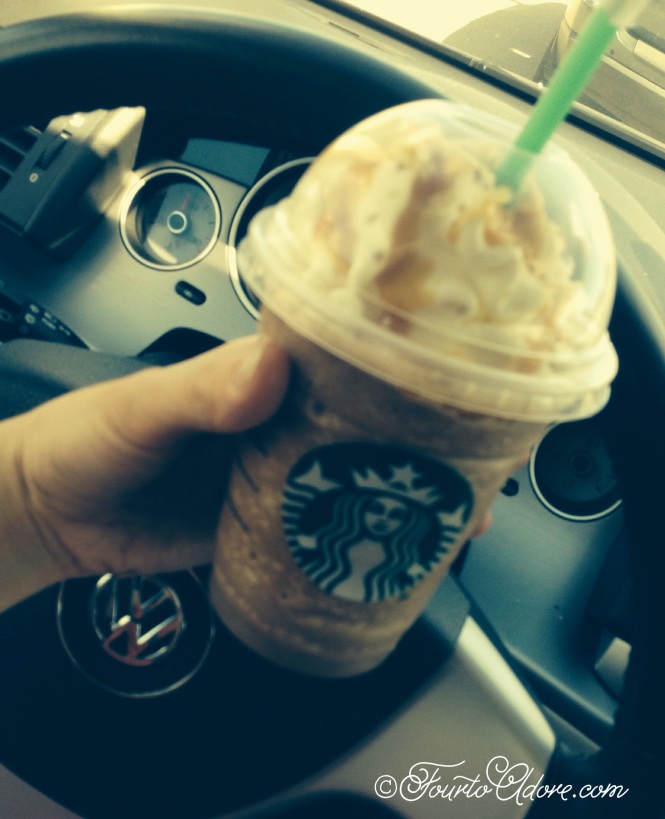 After our successful Target jaunt, I rewarded myself with a salted caramel frappuccino. I won a gift card at our last Moms of Multiples meeting and thought of no better occasion to enjoy it.

12 thoughts on “Conquering My Fear”