When she was about 18 months old, Sydney chipped her front tooth. At the time it was fine, and I expected it to remain until she was old enough to lose it.  It never caused pain, but poor Sydney often caught her lip on it and it irritated her.  When I took the kids for their semi annual dental exam in January, Sydney’s chipped tooth died and was becoming gray.  Dr. Roberts said it was still okay, but we should keep a close eye on it.  Last week, we returned for follow up and the tooth had abscessed, which meant it was time to have it extracted.  George took the day off work to manage the other three kids while I focused on Sydney at the dentist.

Even though pulling this tooth was simple, Sydney required sedation for her comfort and to keep anxiety at bay.  While waiting for the sedatives to take effect, I enjoyed snuggling my little cuddle bug.  Sydney was very brave and never complained about the process.  Even though she was losing this tooth in less than ideal circumstances, I wanted to make it special.  We talked about the tooth fairy and Sydney was excited to be the first one who would get a visit. 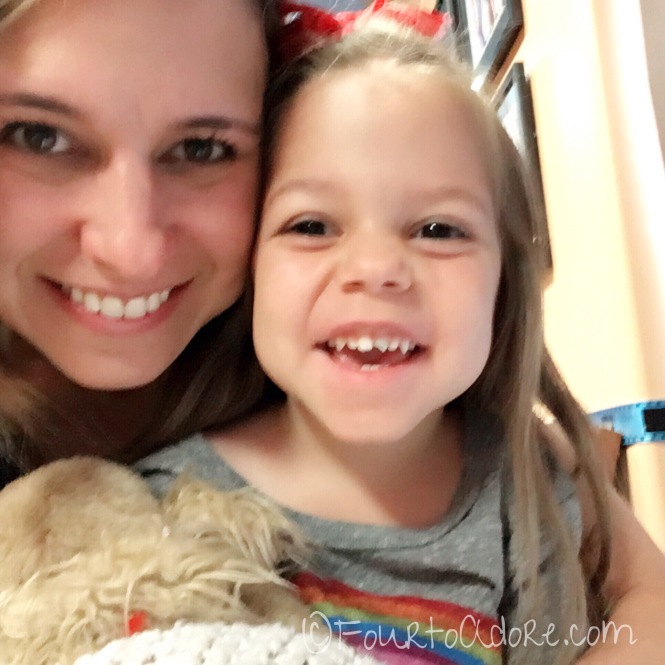 On the way home from the dentist, we stopped by Michael’s to pick up supplies for a tooth fairy door I spied on Pinterest.  We didn’t find the door we originally intended to buy, but instead I found adorable mini wooden treasure boxes on the wood craft aisle.  Sydney chose a beautiful shade of pink in a handy half can size, and I grabbed a shimmer spray for the top.  I knew the Tooth Fairy would appreciate a shimmery pink box!  I picked up three more boxes so the other kids would have one for the future.

Before bed, George read “The Night Before the Tooth Fairy” by Natasha Wing, and Sydney proudly put her Tooth Fairy box on her nightstand with her tooth inside.  I thought it would be much easier for the Tooth Fairy to open the treasure box from the nightstand rather than under a pillow.  I can imagine that flying undetected is hard work as is. 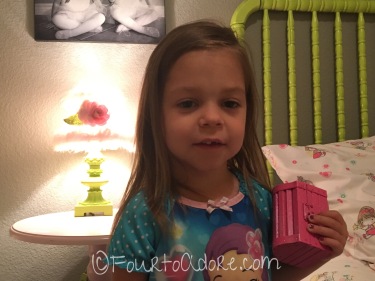 In the morning, Sydney was thrilled to find a sparkling dollar bill, gems, and a handwritten note from The Tooth Fairy in her treasure box.  While the other three kids didn’t receive treasure, The Tooth Fairy left them tiny notes reminding them to brush and floss their teeth.