Yesterday was a rough one so I’m posting about it now. We had our 27 week appointment with Dr. Tabor and the glucose tolerance re-test (yipee!). I was really worried about taking the three-hour glucose tolerance test for several reasons. First of all, I had to fast, including water the night before. Because I am carrying quads, I am on a 3000 plus calorie diet and we get HUNGRY! During this pregnancy, I never had morning sickness per se, but getting hungry has typically induced vomiting, which would not be good at 27 weeks. Also, I’ve learned that contractions are usually triggered by either too much activity, too much calcium, or dehydration. I also know that when dehydrated getting my veins for blood draws is a total nightmare. The thought of vomiting and contracting overwhelmed me, so I begged to get out of the test. I was hoping if I would go on a diet and check blood sugars regularly that would suffice, but nope. Dr. Tabor wasn’t keen on my idea. Arghhh. It was worth a shot though. He did give me some pity at least and let me do a two-hour instead of a three-hour test. Cutting that third hour out did wonders!

We started our appointment with a growth scan, which was nice. I had been wondering how they were all doing so I loved seeing them. Here are the current weight estimates based on body size:

According to What to Expect, they should weigh about 2 pounds to 2 pounds, 8 ounces this week so Rylin, Harper, and Mason are on track. We weren’t surprised that Sydney is still so much smaller. I mean, we couldn’t expect her to just have an enormous growth spurt and catch up. The good news is that she IS growing. Also, Sydney’s fluids were still stable as was the pressure in her umbilical cord. At the end of the appointment, Dr. Tabor mentioned having to deliver early. I didn’t know what he meant by “early” so I clarified. He responded, “Oh, 32-34 weeks.” and he added something about triplets being full term at 36, but quads not really going past 34. This caught me off guard. Just a few weeks ago we had a scare that we might not make it to the big 28 week milestone and now he’s talking 32-34 weeks? Wow, how things can change! Of course, no one knows for certain when we’d need to deliver, but he seems to think going that long is possible. I hate to admit this, but the thought of going that much longer scares me a little bit too. My body does surprise me, but I am so big and uncomfortable already. I don’t know where on earth these babies will go as they grow and what my body can do to help them. At this point, I am carrying nearly 10 pounds of baby, not to mention their fluids, placentas, ect. It is stressful on my body no doubt. That being said, I know that every day and every week we can keep them in is a victory and less NICU time.

After the whole routine part of the visit, I had a fasting blood draw then got to drink a bottle of orange hummingbird food. It was drinking super flat Sunkist orange soda with extra hi fructose corn syrup, which caused an odd sort of burning sensation in my mouth. It was all I could do to finish the thing. After that it was time to wait an hour. I fought hard to keep it down (knowing if I yacked it up, I would have to start again) and to not pass out. I got all clammy and had to fan myself with a magazine to keep it together. George ended up taking me for a walk to the lobby to get fresh air, which helped tons.

After the second blood draw was done, we had another hour to kill. This time, George took me on a field trip to Cook Children’s Hospital, which is across the street from my doctor’s office and where the babies will be. We toured the NICU long ago, but never saw the rest of the hospital. Children’s hospitals are sooooo much better than adult ones! They are so bright and fresh with kitschy art every where. On the bottom floor they have this cheerful food court, a Build a Bear Workshop, Starbucks, a recording studio, a playground, and lounge with games and movies. Such fun! It looked like a place where kids would want to be. It really lifted my spirits to see it. We also strolled by the NICU and visited the nurse who took us on the tour. She told us that they have our quad suite ready and waiting, which is pretty cool!

I snapped a few pictures of proof that children’s hospital are much better than adult ones:

Here is a Lego replica of the hospital-

Here is the lounge/ game room- 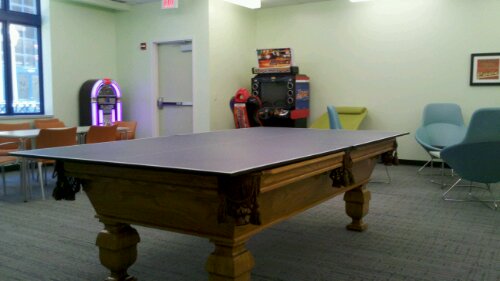 After my appointment, I was totally drained and uncomfortable so I slept most of the afternoon. I am now awaiting my glucose test results.