A few days ago, a friend with preemie twins asked if I could tell her how we sleep trained the babies.  Of course I can!!!  I believe every parent and baby deserves a good night’s sleep; however it doesn’t generally happen naturally.  It takes effort and time, but it is all worthwhile.  There are no books available for sleep training high order multiples.  Thus, I started out by consulting fellow quad mamas then reading On Becoming Baby Wise: Giving Your Infant the GIFT of Nighttime Sleep

(there is a singleton version available too).  I adapted my findings the best I could to quads and it’s served us well. Here’s what worked for us:

When the babies came home from the NICU they were on a three hour feeding schedule (6 am, 9 am, 12 pm, 3 pm, 6 pm, 9 pm, 12 am, 3 am) and mostly slept between feeds.  We quickly learned that no matter the number of feeders available, the babies had to be fed together (or as closely together) as possible to maintain that schedule.  That meant tandem feeding when they were tiny enough to need a side lying position.  We used a firm memory foam pillow and laid the babies back to back to accomplish this.  With two people all were fed together, if it were just me, I fed the fussiest two first then the other two.  Between feeds there were tons of chores to be done from bottle washing to well, taking a shower.  George and I snagged a few hours of sleep here and there between those feeds.  It was excruciating to get tidbits of sleep here and there.  We lived in a fog for weeks.  Incoherent conversations were held and bloopers ensued (I only wish I wrote them down because I don’t even remember much of that time anymore).  The first few weeks, we set alarms for ourselves to feed the babies in fear they were too tiny to alert us.  After a while (I think they were about nine weeks old), we stopped setting the alarms and let them cry to wake us.  The rule was if one woke, they all woke to be fed and kept on the same schedule.  One night we ended up with an extra bottle at the end of the day and were baffled.  After reviewing our feeding chart, we realized the babies slept through their midnight feed: they slept from 9 pm to 3 am!  We logged six consecutive hours for the first time in months.  Yippee!!!!  We felt so much better finally getting that six hours, but we knew the babies could go beyond that.   When the babies were twelve weeks old, sleep boot camp began.  About this time, the babies were getting big enough to sit supported in Boppy Pillows with bottle buddies.   This allowed a successful quad feed and maintain better adherence to the feeding schedule. As part of sleep training, we adopted a few tenants:

Set the Stage for Sleep

We bought sound machines for each nursery to muffle foreign sounds and the cries of siblings.  Most sleep training books (and some parents of multiples) say that multiples don’t wake each other, but ours do!  We invested in diaper booster pads to help absorb more moisture in the night and keep them from waking to wet diapers.  Now that they are bigger we may try overnight diapers.  Additionally, we set up a going to sleep routine (for all naps and bedtime).  We put each baby in a sleep sack, turn their mobile on, and hand them a WubbaNub.  They now use their WubbaNubs as security blankets and self soothe with them during naps and bedtime.

We also follow both book’s advice of where the babies sleep.  They are not allowed to sleep in contraptions such as swings or bouncy seats and they NEVER sleep in our room.  They are put down for all naps and bedtime in their cribs.  However, we sometimes deviate from the books here.  If a baby wakes up and is getting loud enough to disturb siblings, he or she is relocated to a Rock ‘n’ Play either in the laundry room or bathroom.  Rock ‘n’ Plays are probably “contraptions”, but we use them solely for sleeping so I consider them sleeping places.  I am currently working on teaching them to sleep in a Pack ‘n’ Play instead.  When they can sit up they can no longer safely sleep in Rock ‘n’ Plays and I’ll be up a creek without a paddle.  The idea is moving an upset baby away from siblings to maintain good naps for all.  If they didn’t wake each other up this would be unnecessary.  At night, they go into a much deeper sleep and don’t bother each other. 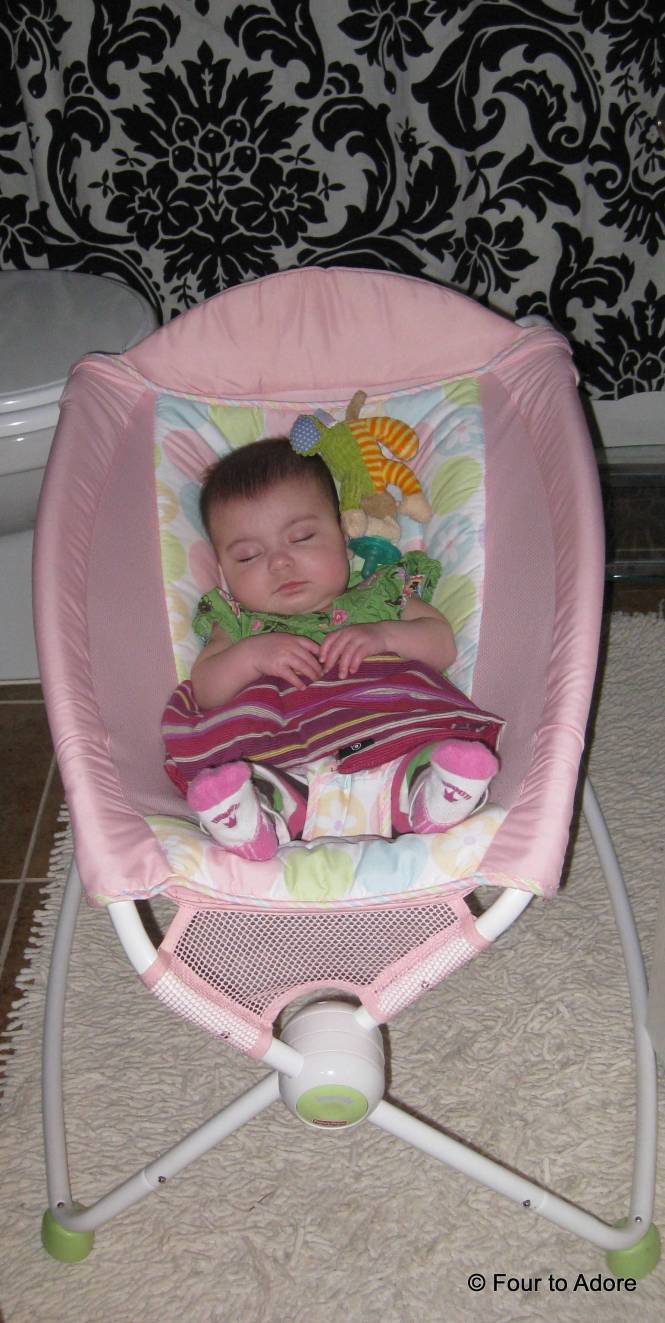 Rylin has been stirring the pot during naps so she’s taken to bathroom naps.  She has a weighted neck wrap on her tummy for cramping.  Works wonders!

Watch for Signs of Drowsiness

When we put the babies down for naps or bed, we try to catch them in a drowsy state.  This is the time when they start relaxing, but before they nod off or get a second wind.  They tend to slow down their movements and eyes start looking heavy.  If we catch them at this opportune time, they go to bed content and go right to sleep.  If we miss it, they inevitably get revved up for more play then crash and get incredibly grouchy.  It can be difficult to find this “sweet spot” so I watched the clock and developed a nap schedule that works pretty well.  It also helps caretakers to watch the clock rather than for sleep cues. 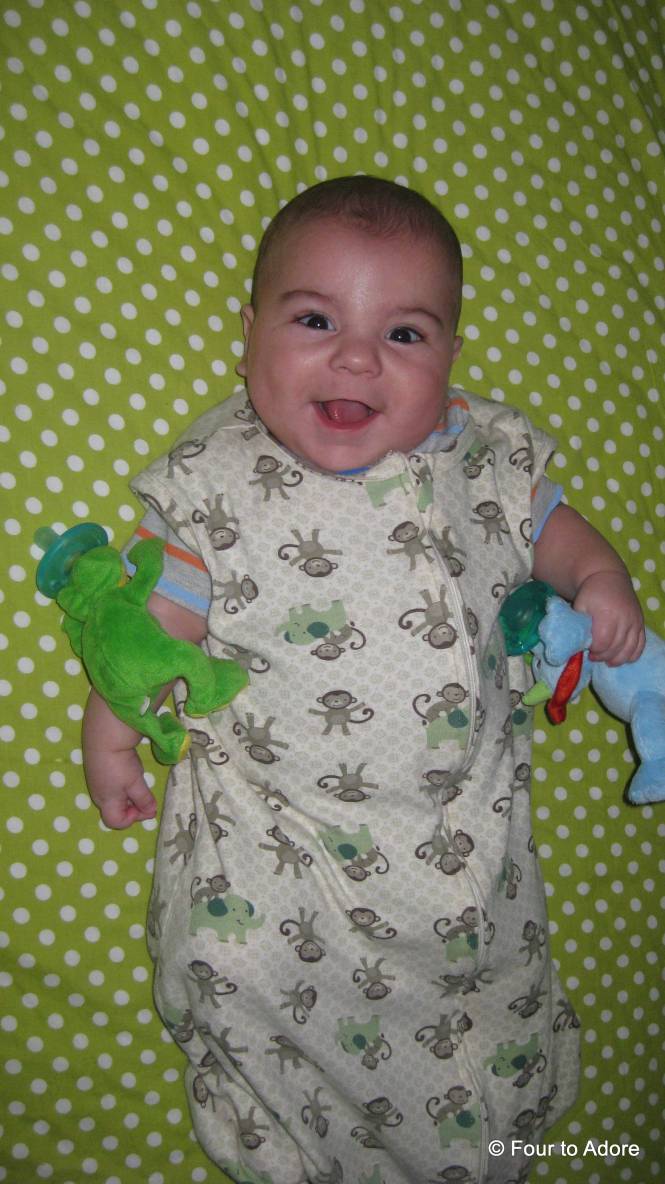 This is how the babies should look when they are put to bed. 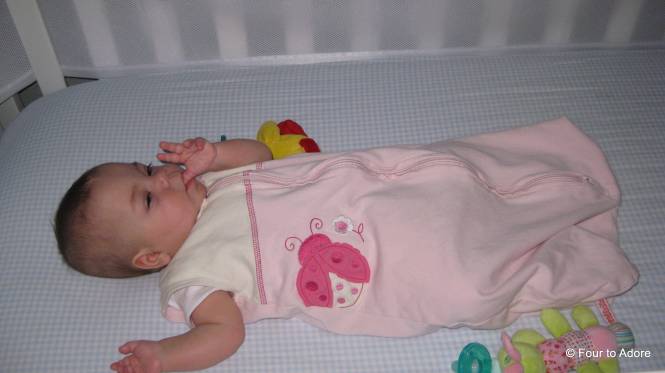 This is how they look about 10 minutes after being laid down. Looks like Sydney’s eyes are getting heavy!

In the day, we follow the Babywise method of following a feed-wake-sleep cycle.  After finishing bottles, the babies stay awake for “playtime” before going down for naps.  In the early days, wake time was quite short.  Sometimes they struggled to stay awake to finish their bottles let alone play.  Over time, they have extended wake time to 90 minutes and sometimes two hours.  For our babies, this cycle is apparently important.  Anytime we deviate from that order, things go awry and babies get cranky.

Plan for When Babies Wake

As part of sleep training, we moved our baby monitor out of our room to the den.  We were a bit nervous about this at first, but babies make tons of little noises all night long that disturb our sleep.  If a SIDs monitor alarms or if a baby truly needs intervention, we always hear them.

If a baby is crying loudly or getting noisy during a sleep, we give them a few minutes to settle on their own.  If they can’t settle, we listen to the cry to infer the meaning.  Having multiples means we must know the unique cries and the meaning for each baby.  For example, if Sydney fusses she is usually settled by her WubbaNub.  However, if Rylin begins escalating, she does not self soothe well and often needs a burp.  Whereas, Harper can escalate if he sees a caretaker nearby so he’s best left alone.  Mason rarely cries or fusses so if we hear him, it’s likely a soiled diaper or a stuck arm.  Of course, they all have a specific, unmistakable cry for discomfort that requires immediate intervention no matter what.  Every few weeks, Harper wakes up in the night with his hunger cry.  We give him a “snack bottle” of about 2-3 oz and he goes back to bed.  We believe these are growth spurts that work out within two or three days and he does not continue feeding at odd hours.

If a baby wakes up cooing and happy, we let them entertain themselves and enjoy alone time until the next feed.  It is not unusual for the girls to wake up about 6:00 am, happily chatter to each other for about 20 minutes then go back to sleep until 7:30.

With sleep training in place, our feed and sleep schedules evolved into longer stretches at night and fewer feeds. By three and a half months of age, the babies started sleeping from 10:30 pm to about 5 am (You may notice we adjusted their feed schedule so the final feed was when we wanted to go to bed ourselves.  This allowed us to get a good stretch of sleep too!).  At this point, we started adding 1 tablespoon of rice to their final bottle to add extra calories to sustain them.  They would wake again about 9 am and we would start our 3 hour feed schedule from there so it was: 5 am, 9 am, 12 pm, 3 pm, 6 pm, 9 pm, 10:30 pm.  After a week or so of that, I noticed we were routinely waking three sleeping babies because Harper was waking.  This is when tough love came into play.  Over a weekend, when Harper woke up we did not wake the others.  Instead, I got up with Harper and soothed him with some rocking and his WubbaNub.  It took three nights and he started sleeping until 6/ 6:30 with the others.  By four months our schedule then went to 6 am, 9 am, 12 pm, 3 pm, 6 pm, 9 pm, 10:30 pm.  We maintained that schedule a few weeks when Mason began refusing the last bottle, but still slept all night.  Although we worried about dropping the late bottle, we gave it a whirl and it worked!  Babies were sleeping from 9 pm to 6 am.  In time, they began to sleep longer and woke at 7/ 7:30 for the first feed.  Over a few nights, we gradually backed the last feed up so their bedtime became 8 pm.

By the time the babies were six months old, we adopted this schedule:

Notice how naps are about 1-2 hours long and occur after about 90 minutes of wake time.  We recently attempted moving to a four hour feed schedule, but were not ready because the babies become too sleepy and grouchy if wake time is extended too much.  As they can tolerate longer wake times (we push them about 5 minutes here and there to experiment), we will revisit the coveted four hour feed schedule, which will result in two longer naps and dropping the third one. 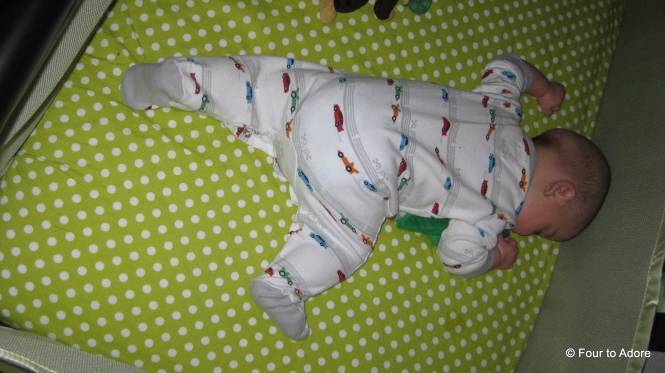 Since Mason can roll over, he’s a tummy sleeper. 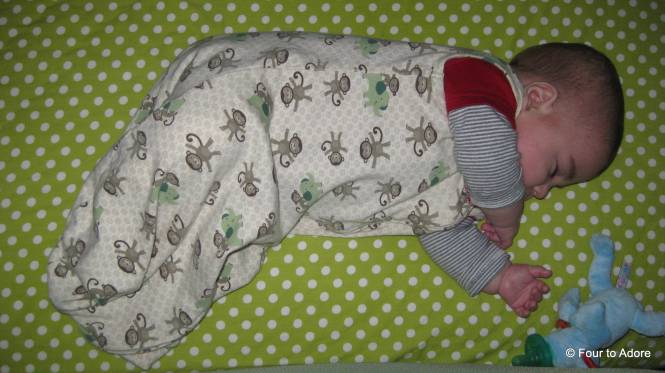 Our little side sleeper, Harper.

I found this blog: Chronicles of a Babywise Mom that is a great place to go for troubleshooting and other Babywise implementation ideas.  The author uses the principles of Babywise, but bends them to fit her family’s needs.

Fellow quad mama, Amber, wrote about how she got her crew to sleep 12 hours at night on her Blog, Texas Tales.

Here are the books I read.

On Becoming Baby Wise: Giving Your Infant the GIFT of Nighttime Sleep

On Becoming Babywise, Book Two: Parenting Your Five to Twelve-Month-Old Through the Babyhood Transitions

I would also like to give a special thanks to my cousin, Lindsay, who is my go-to gal on sleep training all things Babywise.  She may not have quadruplets, but she does know a thing or two about sleep training, schedules, and babies in general!