In what seems like an eternity ago, the babies’ NICU nurses often chattered about the day when the babies would be bigger, healthier and returning to the hospital.  There would come a day they would return to the hospital not as patients, but as visitors for the NICU Reunion.   At the time, I don’t think we could see the forest for the trees.  Nine months later, we finally reached that point: NICU reunion time!

As part of the reunion, the hospital requested that each parent make a post of their baby filled with pictures from then and now with a statement sharing the NICU experience for current families to see, and bring them hope.  As I often do, I procrastinated completing this project.  Not because I did not want to do it, but I knew it would take me a good deal of time to create.  Days before the reunion, I finally went to Snapfish and ordered tons of pictures of the babies from their NICU days to what they’ve been doing lately.  It turned out to be quite the walk down memory lane.  It was only nine short months ago that our babies weighed under 4 pounds each and lived in boxes.  Oh how far we’ve come!  A few hours after ordering over sixty pictures online, I picked up a thick envelope from our neighborhood Walgreens.  The task daunted me even more when I flipped through a stack of pictures that would never fit onto a tiny poster.  It sat on our dining room table in shambles for a few days until my mom came to the rescue.  Mom just loves a creative project like this.  I remember she and I staying up “all night” (what I later realized was more like 10:30 pm at most) doing school projects.  Mom never did anything for me, but always put “her touch” on it so it looked just right.  When it came to my latest project, Mom helped me sift through the mounds of pictures and then helped me to arrange them just so.  I took a picture of the final product: 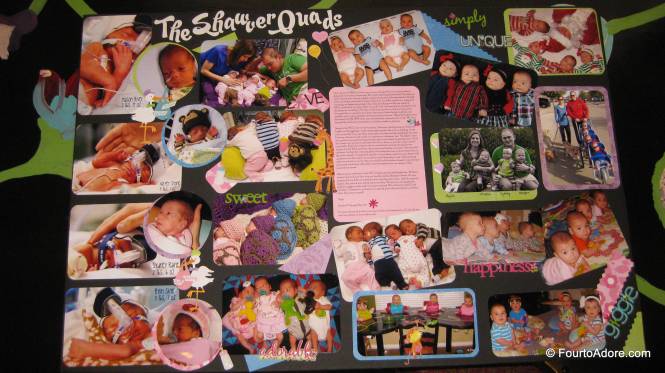 I was really pleased with the final result. In fact, I hated to part with my little project, it is a cute keepsake.  I hope it inspires current and future families with babies in the NICU. After all, being in the NICU was hard, but we eventually saw the other side.

The pink piece of paper on the poster reads:

On February 2, 2012 our lives were forever changed by four tiny heartbeats detected on an early ultrasound.  We were expecting quadruplets!  That day we were warned about many possible complications and risks associated with high order multiples, particularly the fact that they would be premature.  Instead of worrying, we began preparing.  One of the first things we did was research NICU facilities in our area.  After a tour of Cook, we immediately decided it was the place for our babies.  Not only could they provide us with a private suite equipped for our quads, but we knew they would offer the best medical care possible and a family friendly environment for everyone.  When the babies were delivered July 20, 2012, they were immediately transported to Cook.  We later learned the staff was preparing for our babies weeks in advance.

Being in the NICU was not always easy.  It became taxing seeing our babies so fragile and struggling to tackle seemingly simple tasks such as feeding.  It was even more difficult to see them make gains one day and then backslide the next.  However, being at Cook made our experience a pleasant one.  The babies’ room always felt warm and inviting even though it was indeed a hospital room.  All of the nurses, care partners, and staff took time to know us and the uniqueness of each baby.  Staff who worked with us could tell at least one thing that was unique to each baby and they championed each baby’s successes.  Not once did we leave the hospital worrying about the babies because we knew they were in the most capable, loving hands possible.  If our babies could not come home with us, there is no other place we would have left them than Cook.  Each morning when we would return for visits, we would find the babies dressed to match their linens and sometimes with notes or pictures taken from our camera.  That warmed our hearts.

After a seven week stint in the NICU, babies started trickling home.  Within a week’s time we found four tiny, yet healthy babies filling our home.  At nine months old, it is difficult to believe how tiny they once were.  Just like typical babies, they attack new milestones every day.  We are now enjoying baby babbles, giggles, teeth, and even some scooting!  We will forever hold Cook Children’s Hospital in our hearts as a special place that nourished our babies when they were so small. 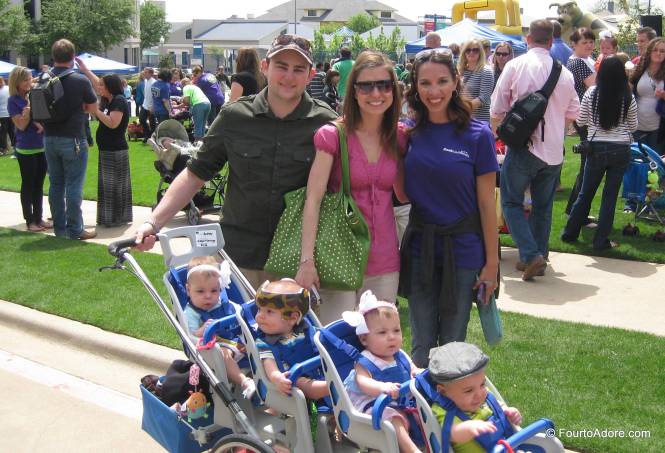 It took us weeks to find a night primary and we finally found Tiffany. However, she sent the babies home within four days! We were sad we didn’t get much time with her, but were happy to finally be home with all the babies. 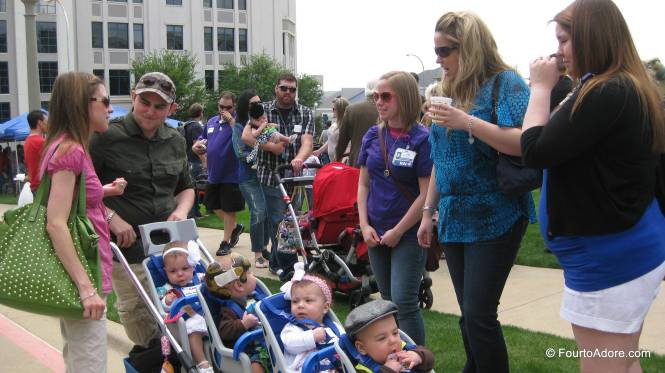 Some of the babies’ nurses: Kim, Kiki, and Emily got to see how much the babies had grown.

George and I with Liz who was one of the babies’ primary nurses.  She was instrumental in helping change Sydney’s protocol when she had pneumonia.

There were several volunteer photographers at the even, one captured these precious photos of each baby.  I especially love Harper’s lion yawn.

Rylin became a bit fussy so Nisey rescued her from the Runabout. 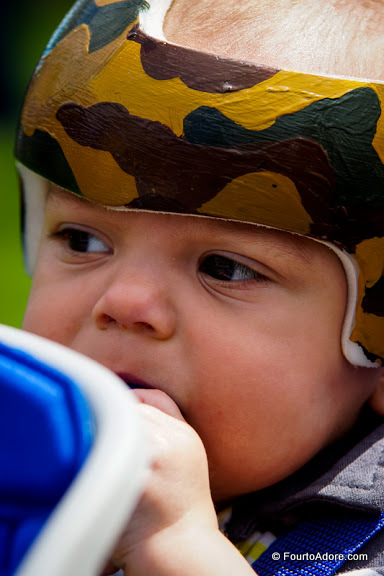 One of the highlights of the reunion was meeting the McClean family.  Unbeknownst to me, they were the only other set of quadruplets admitted to Cook Children’s.  They are now four years old and too big for a Runabout.  I appreciated that the father of the quads told George it got easier for them every year.  Sometimes a little encouragement like that goes a long way!

The McClean and Shawver clans together! 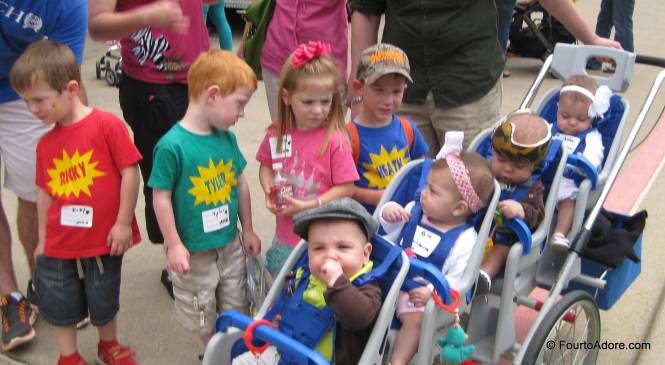 The “big kid” quads checking out the baby quads.

Next year the reunion may be more exciting with babies who can walk!  Of course, we’ll likely

P.S. As of now, we are ranked 4th in the Top 25 blogs contest.  You can vote for us in just two easy clicks.

What little things brightened your week?