Several weeks, possibly months have passed since I realized the boys needed their first haircuts.  George willingly would have taken the task on himself, but I wasn’t about to let him chop at their baby locks.   Last spring, I allowed him to snip the girls bangs and it was slightly disastrous.  His handiwork ended up as super short, blunt bangs that took months to grow out.  I cannot cut along a straight line on paper so I wasn’t going to attempt any scissor work.    This was clearly a job for professionals.

Mason’s hair had a disheveled appearance most of the time prior to his cut.

I knew of three children’s salons in our area and began a little recon.  Do you have any idea what they charge for toddler cuts????  Both boys together would cost more than I pay for a cut and style with my stylist.  The bad news, these three salons were in cahoots.  The prices were exactly the same!  I did, however, find that Sweet & Sassy offers a discount on “Toddler Tuesday.”  Score!  Except I had one problem, I wasn’t about to take four toddlers to a salon on my own.  Reinforcements were needed.

Yet, most everyone we know is at work on a Tuesday.  I racked my brain trying to figure out who might be available.  Then, BAM!  My long time friend, and college room-mate, Kristen sent me a text.  She wanted to let me know that she and our other room-mate, Neha, wanted to spend Tuesday with the quads and me.  Sometimes things just work out.  I was totally stoked that my two buddies would be present for the boys’ first hair cuts, and I would have two extra sets of hands.  When the big day arrived, we all met up at the salon and maneuvered two double strollers through the glitzy salon.  The entire store front was jam-packed with sparkly fashions, accessories, and make up.  Clearly this joint is suited for the girliest of girls, but thankfully they offer boy hair cuts too. 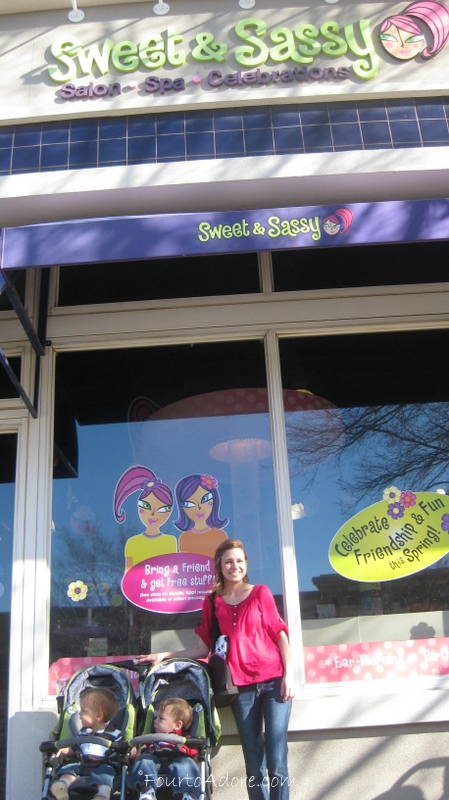 We checked in and found that each of the boys had his own stylist.  Harper is generally the most content of the babies so I plopped him in the chair first.  Maria fitted him with a cape and the tantrum ensued.  Harper squealed as if his skin were being scalded with napalm.  It was horrific.  Meanwhile, our resident “Drama King”, Mason, happily sat in his chair as Morgan snipped and shaped his strawberry brown mop.  I expected that someone may be unhappy so I came armed with a variety of toys and Annie’s cheddar bunnies.  Harper was having none of it.  He continued wailing and sobbing with increasing intensity. It wasn’t long before Maria suggested I give him a lollipop.  It sounded like a good distraction, only I didn’t bring lollipops.  Maria pointed to a gorgeous display of gourmet flavored lollipops molded into a variety of shapes.  I cautiously selected one in the lightest shade, bracing myself for the potential price tag on said lollipop.  Considering I was purchasing sale hair cuts, I hated the idea of paying a hefty penny for a piece of candy.  However, we desperately needed something to help calm Harper.  I happily presented the lollipop to Harper and he refused.  Instead, Mason enjoyed every last lick.

Even though Harper was in hysterics the entire twenty minutes of his hair cut, Maria worked without missing a beat.  In fact, it was proof that there’s a reason toddler cuts don’t come cheap, these dear people are worth every penny. Once Harper’s cut was done, we unfastened his cape and the tears magically stopped flowing.  The next time we go in, we may nix the cape if that means we’ll have a happy child.  Both boys looked quite handsome in the end.  As soon as we loaded everyone back into the strollers, the girls were each offered a lollipop, and I realized they were complimentary.  Whew! 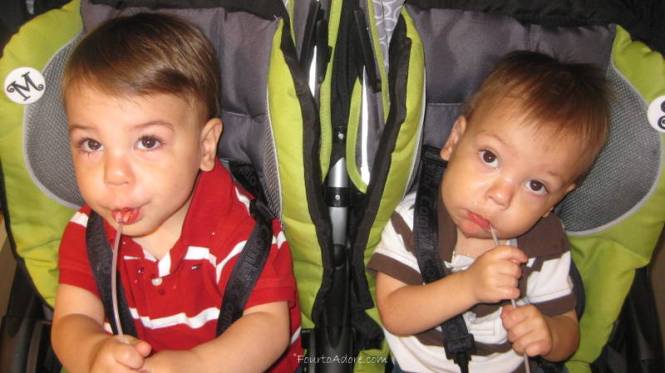 After his torture treatment was complete, Harper appreciated his lollipop much more. 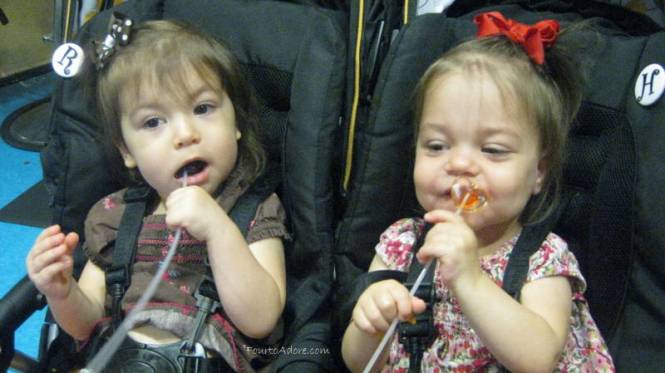 The girls waited patiently the entire time and therefore earned their lollipops too.

The weather was stunning so our little quadventure continued.  Neha, Kristen, and I let the quads romp around the town square fountain.  They had a blast running freely, however redirecting them from the street was no cake walk.  We then enjoyed a little time in Earthbound Trading Co. where there were plenty of toys to explore.  Following our time exploring, we hit up Cristina’s Tex Mex because kids eat free on Tuesday!  It turned out to be a lovely day with some special friends. 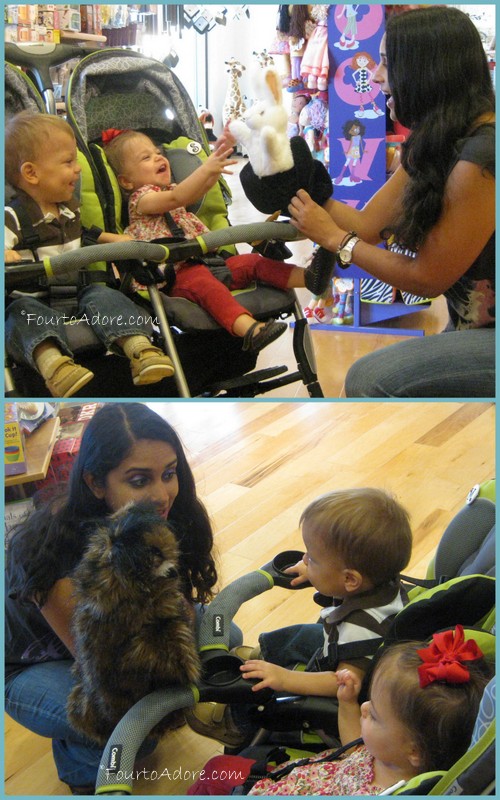 Neha was impressed to find the babies can label most any animal, including iguana and produce the corresponding sound. Mason was impressed with this owl puppet, which boasted moving eyes and beak.

What service do you appreciate even if the price seems a bit hefty?