Harper getting ready to venture outside the NICU! 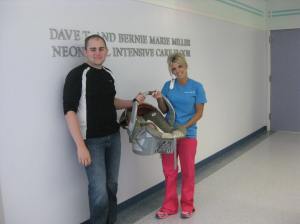 Can you tell we just stayed up all night in the NICU and haven’t had a shower yet? Welcome to the perils of parenthood!

Harper is the first to get a ride in the van.

It’s official, George and I survived rooming in at the NICU and our first night at home with Harper. Just like with delivery, it is surreal to finally have a baby in our home. We have waited for this moment so long, it is almost hard to believe it finally arrived. Harper did not mind riding in his car seat one bit and pretty much slept through the ride. I have to wonder what it is like to be out in the big world outside NICU walls for the first time. Was it hot? strange smelling? overwhelming? Who knows because Harper was pretty quiet about it. He only grumbled a little during the ride.

Once home, Harper got to meet his furry sisters, Sasha and Lily. While he was unphased, Lily was particularly curious about her new brother. She could not stop smelling him and wanted to be close by all the time. When we fed Harper in our rocking chair, Lily sprawled on the back of it so she got a bird’s eye view. When he slept in his pack ‘n’ play, Lily kept a watchful eye. I have a feeling they will be good friends one day. While Sasha was not nearly as curious, she investigated the pack ‘n’ play quite often especially when she heard baby gurgles and fusses.

George and I have been working on figuring out our “system” for feeds and it will absolutely be a work in progress as babies come home. (I have to admit I am a bit anxious about what having all four at home will be like). It looked like a chemistry lab in our kitchen as we tried to calculate the best way to mix formula and milk. You see, preemies are fed in mililiters and formula recipes as well as bottles are geared towards ounces. Needless to say, math is not my forte and it was a bit overwhelming. I’ve really taken the NICU milk bank for granted. We will get it down to a science and then someone else will come home only to force adjustments to the calculations. We’ve also discovered we need more bottle drying racks to capicitate the 32 bottles we will use per day (eight feeds x four babies). Our plan is to make all of the feeds for a 24 hour period at once and then wash bottles as they are used, storing them on the drying racks. Our kitchen will never be the same! Farewell Kitchen Aid and Calphalon, hello Avent and Similac!

Feeds aside, Harper had a great night. He wasn’t a huge fan of the pack ‘n’ play, but managed to sleep relatively well once I put him in a swaddle sack. He also proved to be a good night time feeder and finished pretty quickly. Praying that continues and siblings follow suit.

Today we will be taking Harper for his first return visit to the NICU so we can spend time with the rest of the crew. Wish us luck.

11 thoughts on “First One Home”