Several months ago when Rebecca at ABeautifulRuckus.com invited me to participate in her weekly series: The Little Things Thursdays, I had no idea how much my readers and I would enjoy it.  Her idea was simply brilliant.  The purpose is to reflect on the week and make note of some of the little things that brightened it.  It’s incredibly easy to get wrapped up in stress and things that go awry,  but so much more fun to recall what was great no matter how small.  The cherry on the top is when readers tell me how much they now look forward to Thursdays!  In a typical work week, most everyone looks forward to Friday (TGIF!!!).  In my little space of the world, Thursdays are much more appreciated now.  Thank you, Rebecca!

Without further ado, here are the little things that highlighted our week:

1. The babies are now nine months old!  I’m having a hard time realizing how fast they are approaching their first birthday and at the same time enjoying every moment with them ( minus some of the screaming fits we have).  Every day is a whole new world for them and they are constantly reaching new milestones.  At nine months old, everyone has at least one tooth (Rylin finally got her first one), they hold their own bottles, they sit up with minimal assistance, roll both ways, maneuver on the floor by pivoting and scooting, and babble often.  Sydney was the first to say “Dada”, and she says it often!  Harper was saying “Mamama”, but hasn’t been doing it much lately, making me one sad Mama.  They’ve also become keenly aware of each other.  Toy snatching is commonplace around here.  One day Harper even tried to roll on top of Mason to swipe a coveted toy.  At meals, Sydney and Mason frequently turn to face each other and sometimes hold hands.  I never seem to catch those sweet moments on camera because they are short-lived. 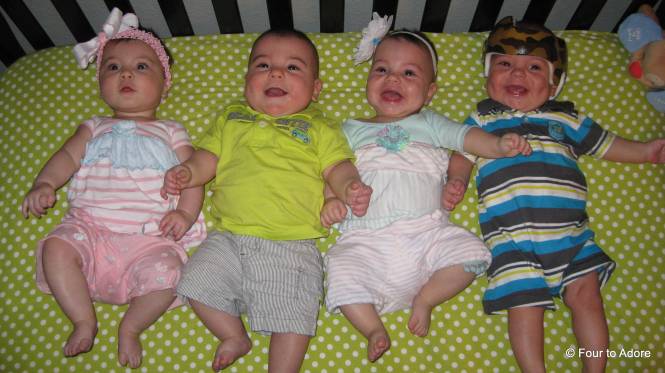 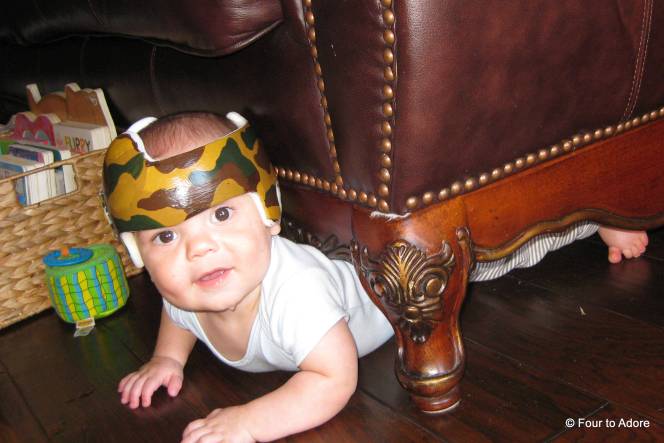 Here’s what happens when Mason starts scooting around.  If his head would have fit under the couch, I’m certain he would have slithered all the way under and scarfed a few dust bunnies! 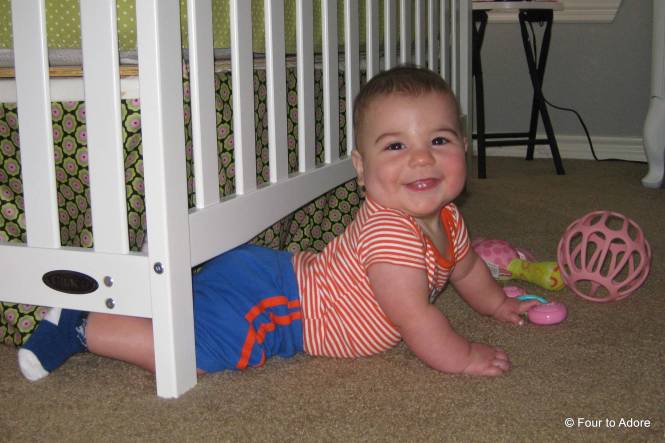 Harper backed it up and under Sydney’s crib.  For some reason our babies love backing up.  You can really see Harper’s teeth in this picture; I think they’re so cute!

Here’s proof that Sydney can roll over. She’s been rolling over and getting her legs stuck between the rails. Yes, she is sleeping here.  No, I did not move her (she seemed totally comfortable). 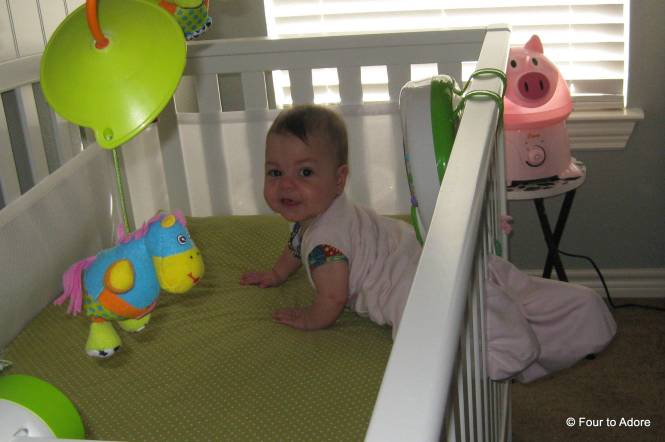 Surprisingly, Sydney was perfectly content having her legs stuck even after she woke up that way.

2. Since we moved into our house, we’ve taken great pride in it’s appearance inside and out.  I love for our yard to look fabulous, but George is the resident yard man.  He’s always worked really hard to make it look it’s best.  However, last summer bed rest and drought got the better of our yard.  The wisteria that once covered our pergola and the sole tree in the back yard both perished, which means we have no shade.  George has been rather depressed about the state of our yard and it really is rather sad.   He ran to Home Depot this week and purchased a few flowers to help the cause.  He filled a pot on our patio with my favorite flowers, Gerber daisies.  These little gems do great in Texas heat and keep bright, cheery blooms all season long.  In fact, there was a single daisy sprout already in the pot.  George was going to take it out and replace it, but I fought for that little flower.  It’s going to be a hardy one, it managed to survive a Texas drought, neglect, and a winter freeze already. 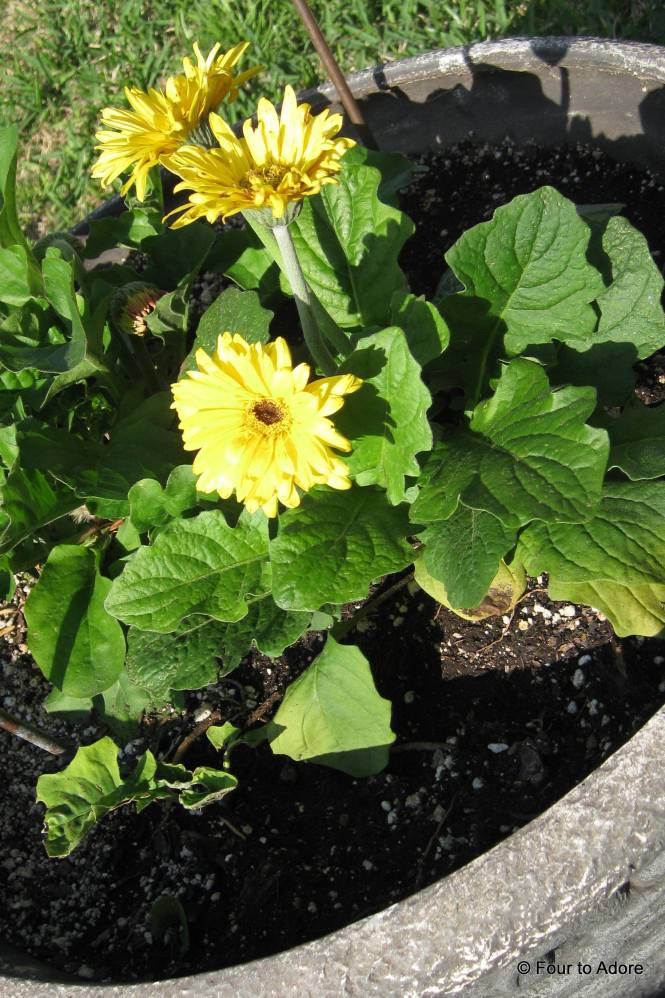 Bright colored daisies are always a great pick me up! 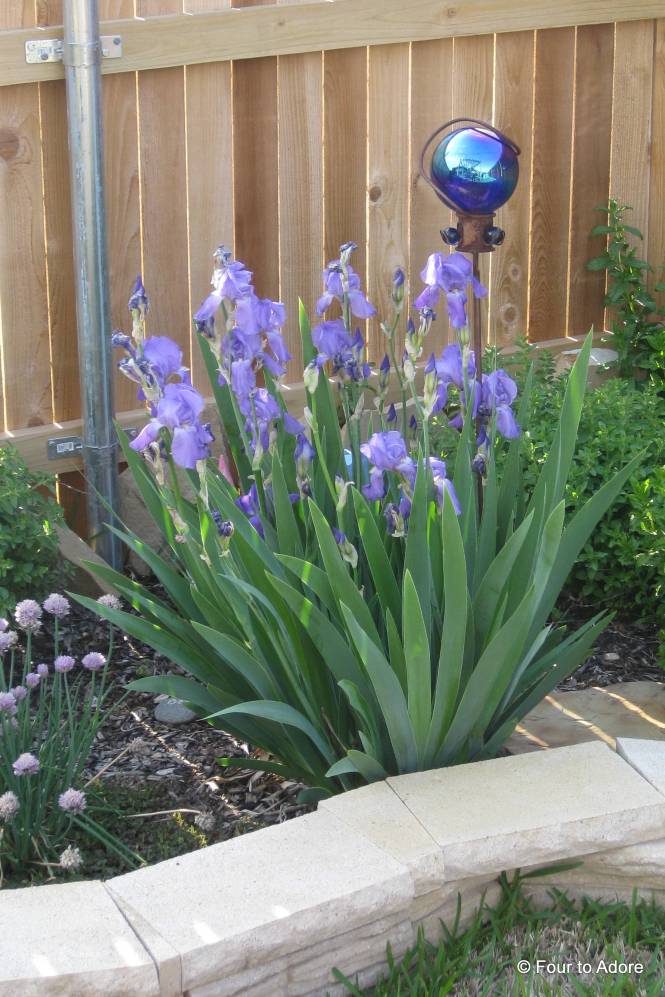 Despite all the withered plants in our yard, these Iris’ came up and bloomed on their own. They came from George’s Granny. She loved her garden and I love that her plants still bloom in our yard.  I think she’d like that.

3. Our friend Natascha and her mom traveled all the way from Berlin for a holiday that  began here in Texas.  Of course, they couldn’t travel all that way from Germany without seeing the babies so they dropped by the house.  The babies warmed up to them and acted like they were old friends.  It was priceless seeing George teach Natascha how we diaper and feed the babies.  He did a really good job, actually.   He’s probably got more experience with those things than the average dad seeing we do everything times four.

4. So far, we’ve received over 1,000 votes for the Top 25 Moms of Multiples blog contest, placing us in third.  Thank you all for voting because now it’s getting close, sometimes as few as 3-4 votes separate the rankings.

Many people have asked what we get if we win.  The answer is mostly notoriety and also exposure that can open up new opportunities for us.  I honestly love writing and in the future hope to author a book.   This sort of competition can help me achieve some of my long-term goals.  Winning does not bring any sort of tangible prizes or money, but I would still want win, or at least remain in the top 5.  As I mentioned before, George and I are highly competitive so we don’t need to be offered much to play a game.  Winning aside, there are some other great blogs participating and I’ve enjoyed checking in on them.  The Littlest Lesnau’s and A Beautiful Ruckus are both authored by friends and fellow quad mamas so I was already familiar with them.  However, I cruised the triplet blogs that are contenders to win:  The Great Umbrella Heist and The Best Things in Life are THREE.  I personally  found both of them entertaining.   If you have spare time you may want to check some of the other contestants blogs.

What little things brightened your week?