Just over a decade ago, I anxiously toured the university where I would soon begin my graduate studies.  That was the day I met Melissa.  I remember her enthusiastically answering trivia questions asked by our tour guide and thinking she was far more studious than I.  After all, I had no knowledge of these university factoids.  Once classes began, I timidly attempted to blend into the group whereas Melissa took ownership of the front row.  However, it wasn’t long before a long lasting friendship would emerge.   In fact, she quickly had me sitting in the front row with her (to this day, she has me sitting in the front at conferences and work meetings).

Over the years, we’ve shared the joys and struggles of life.  We endured graduate coursework followed by a year long internship.  We celebrated momentous occasions including weddings, buying homes, becoming puppy parents, and then starting our own families. Melissa was a loyal friend and confident during my years of struggle with infertility and supporter during my difficult pregnancy with quads.  On several occasions, I’ve chatted with fellow quad moms about how going through challenges in life help you take notice of who your true friends are.  Melissa is among that group of true friends. 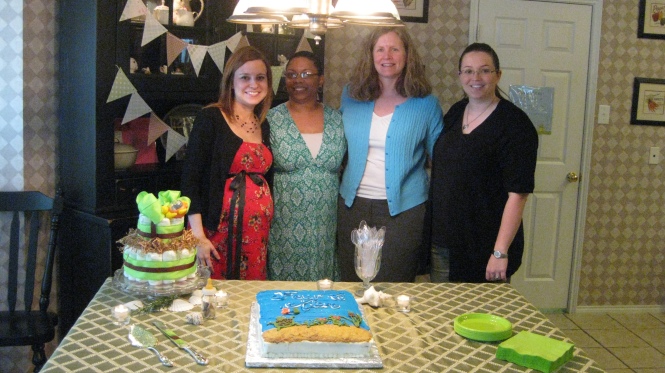 Just before I went on bed rest, Melissa hosted a baby shower for me.

While I was on bed rest, Melissa brought me lunch several times and kept me company (I cannot express how lonely bed rest becomes). She also helped me prepare ahead by making freezer meals.

Both of us can attest to the fact that you just never know the plans that God has in store.  Shortly after purging the majority of our infant gear, Melissa sent me a message inquiring about our infant car seats.  Huh???  I knew she already sold her baby gear the previous spring at a consignment sale (she has two girls, ages six and two).  It didn’t take me long to figure out she was expecting TWINS!  Undoubtedly, raising two plus twins will be one of the most incredible blessings and challenges for Melissa and her husband.  Honestly, there are not better parents for the job, and I cannot express my excitement for them.  Melissa is among my go-to girls for baby and parenting related advice and always will be on that list.  While she’s a seasoned mother, I am looking forward to sharing the MoM (mother of multiples) experience with her.  It seems to be another experience the two of us can muddle through- good times and bad.

Last weekend, I had the pleasure of hostessing a shower for Melissa and her twin girls.  Despite having now 18 month old quadruplets, I attempted to create a shower with the same attention to detail that Melissa hosted for me.  Since Melissa already has two older girls, I thought a diapers and wipes shower was appropriate.  I can attest to the fact that multiples go thought both of these commodities rapidly.  In their first year, the quads used nearly 10,000 diapers.  However, thanks to the generosity of others, we bought only a few that first year.  As my gift to Melissa, I constructed a diaper cake that also served as a whimsy centerpiece.   Being a novice at diaper cake building, I found a tutorial that did not involve diaper rolling.  To spice it up, a bottle of champagne served as the middle of her cake.  After the girls arrive (or sleep through the night), Mommy and Daddy can enjoy a celebratory toast.  In addition to her cake, I created a DIY baby wipes kit so she can try her hand making baby wipes.  We’ve been making our own wipes since the quads were about eight months old, and I now prefer them to commercially made versions.  I sincerely believe they’ve helped prevent diaper rash.  Plus, they are very inexpensive (we spend $1/ week for the quads).  When I was on bed rest, and after our babies were born, I remember really enjoying freezer meals Melissa made  so I also whipped up a freezer meal gift bag.  One of my favorite go-to meals is crock pot chicken tacos, which I turn into chicken spaghetti on night two.

In true quad mom fashion, I began preparations several weeks in advance.  It only took me at least six days to fully assemble the diaper cake, and another week to complete my table scape.  I was really pleased with the outcome- 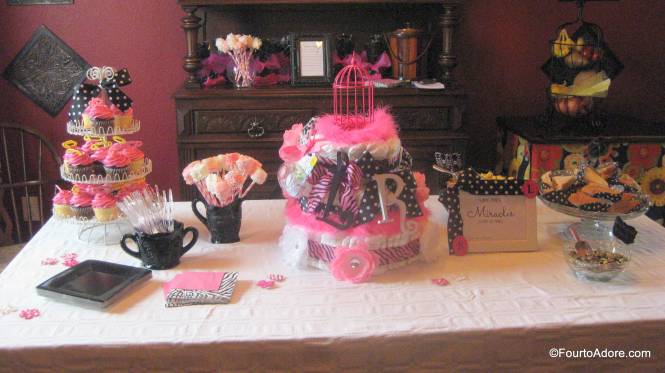 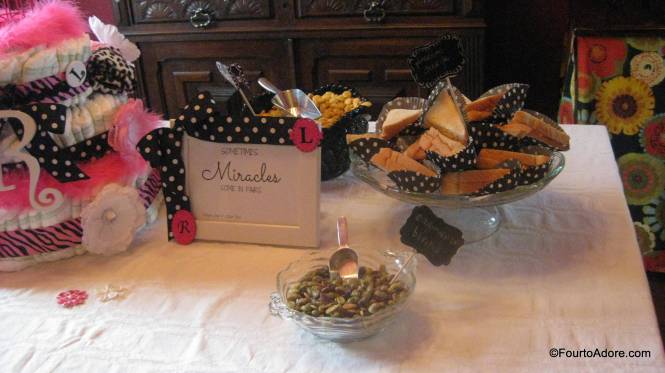 I re purposed a bland picture frame to make a decoration for the table that doubled as a gift for the nursery.  It’s a bit difficult to read, but it says, “Sometimes Miracles Come in Pairs”, on the bottom corner I added the girls’ names for a personal touch.  I always love gifts with by kid’s names on them.

Since the party was in the afternoon, our menu included light finger foods.  I made the same pimento cheese sandwiches we had a the quad’s first birthday party.  I was delighted to find a good excuse for making marshmallow pops. Thanks to melted chocolate, I made a total disaster of my kitchen, but I think they looked cute.  To balance the sweet and salty flavors, I made a batch of my Great Aunt LaFay’s Oyster Crackers and edamame cranberry blend.

For a little added decor, I made a graphic listing twin trivia and put it in an ornate frame.

I wanted a little party decor in the den since that’s where the guests would congregate.  My mom helped me cut scrapbook paper into triangles, and I printed black letters from a Word document that I cut out and glued to the triangles.  I used a bit of soft pink tulle, tape, and clothespins to hang them.  It still looked a bit plain so I added silver mesh ribbon along the top for sparkle.

When I am hostessing a party, I struggle to find the balance between social butterfly, serving others, keeping everything flowing, and taking pictures.  Before the guests arrived, I snapped a few pictures of Melissa and that was it.  Even though I spend the majority of my days as master juggler, I simply can’t keep up the pace at parties. 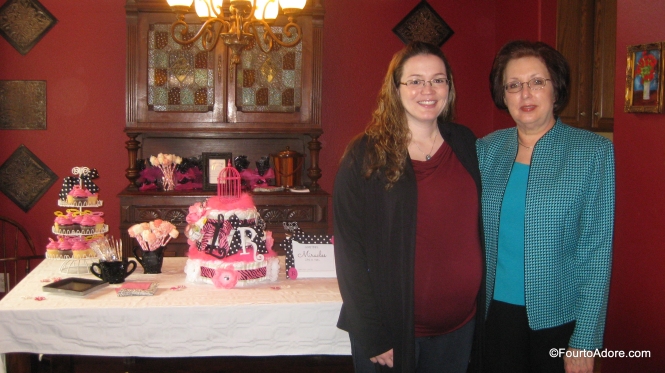 Melissa’s mom, Donna, was able to join us.

I am certain that if we could travel back in time ten years, Melissa and I would laugh hysterically at the thought of us having four children each.  Certainly, we both wanted children, but we never could have dreamt having large families.  Life is certainly a journey, which is enhanced by the people around us and I treasure Melissa’s friendship dearly. 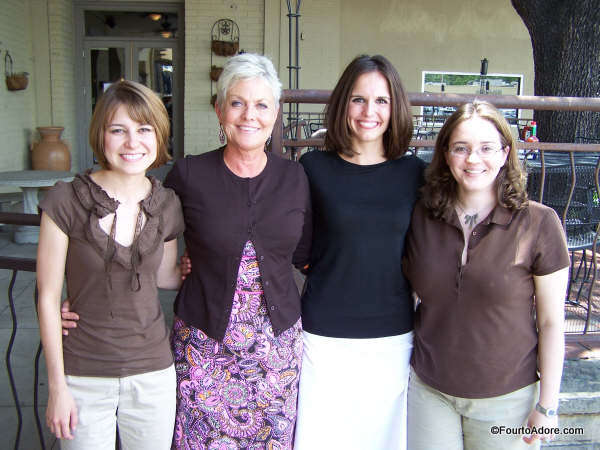 This picture was taken on our final day of internship. When I found this picture, I noticed a few interesting things. 1. Melissa & I are dressed alike in chocolate brown with khaki (I think the more time you spend with someone, the more things you do the same, and that includes dressing alike.) 2.  This picture is of the three interns and our supervisor.  All three of the interns are now MoMs.   Jenny (black shirt) has identical twin girls, I have the quads, and Melissa is now expecting twin girls.

Have you experienced challenges in life that helped you recognize true friendships?